When Wham-O Was King: Why The Innova V. Discraft Debate Is Old News

In the 1980s, Wham-O reigned supreme. But the current discussion over Innova and Discraft seems to assume that Discraft has always been the #1 -- and frankly only -- Ultimate disc. This historical perspective shows how today's discussion sounds a lot like the one in the early '90s.

March 18, 2013 by Charlie Eisenhood in Analysis, Featured, News with 14 comments 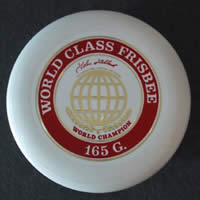 Choices abound in Ultimate. You can order your jersey from a variety of manufacturers; you can choose to wear football cleats, soccer cleats, or rugby cleats, and even then you have to choose your shoe brand; you can pick your tournament schedule; and you can even pick your favorite pair of ultimate gloves. But for many of today’s ultimate players, there is one thing you never choose: you always play with a Discraft Ultrastar.

Since 1991, the Ultrastar has been the USA Ultimate (formerly Ultimate Players Association) approved disc for Championship level play. It is the gold standard of ultimate discs, and anyone caught playing with a Wham-O is immediately shamed until they get on board.

The fierce loyalty to Discraft has persisted for good reason: they make an excellent product, they support the sport financially, and they continue to help drive the growth of the game. Perhaps that’s why, when Major League Ultimate announced that they would be using the Innova Pulsar, an Ultrastar competitor, as their official disc, many players were rubbed the wrong way.

But this move — and the uproar — is not unprecedented. Discraft itself knows the feeling of being the insurgent. For many years, the Wham-O Frisbee was what Discraft is today — the only disc in mainstream use — and people defended it passionately.

For most of the 1980s, the Wham-O 80 mold Frisbee was, tacitly, the official disc of ultimate and the UPA. At 165 grams, it was lighter than today’s disc, but still performed well in high winds and maintained the consistency that players desired. Even after it was discontinued in 1983, many high-level games used the disc because it was just that good. It set the standard for what an Ultimate disc should be.

Wham-O began making two new discs — the 80d and 80e. Players quickly took to the 80e mold, and it became the new standard disc for much of the 1980s.

But something happened in the later half of the decade. Wham-O, trying to drive prices down, changed the chemical composition of their discs.

Mark Licata, an ultimate player and plastics expert who would later become the Chair of USA Ultimate’s Disc Standards Committee (a position he held until January of this year), explained what happened. When the plastic is injected into the mold to make a disc, they have to add compounds to the mixture to turn the disc a particular color. For white discs, the standard is to use Titanium Dioxide, which not only turns the disc white but gives it more rigidity needed for good flight characteristics.

In the 1980s, because of its chemical makeup, Titanium Dioxide was increasingly popular — and increasingly expensive. Licata explained what happened next:

At the time, Titanium Dioxide was getting pretty scarce. So the [Wham-O] people in Mexico, when they were molding the discs, they put in some Aluminum Oxide and other fillers, instead of straight [Titanium Dioxide]. I don’t know how much you know about polymer chemistry, but the other additives were aggressive and they actually caused some degradation of the plastic and loss of performance.

Licata even did a full chemical analysis for the Pittsburgh Flying Disc Newsletter, which the UPA later republished in its April 1990 newsletter. It showed that 80e mold discs from 1986 and 1987 were chemically different. Players had started to notice the subtle difference in flight.

“The new 80e mold — they weren’t that good,” said Licata. “They’re what we call wambly. The quality of disc just wasn’t what it had been in the past.”

Concurrently, Discraft began to take hold with some Ultimate players as a superior alternative. Increasingly in the late ’80s, players began to use the Ultrastar, a heavier 175 gram disc. It had been around since 1981, but wasn’t used much early on because Wham-O had a patent on the flight rings — the famous rings along the top of the disc where your thumb grips — until the middle of the decade. Once the Ultrastar added the flight rings, it started to get used quite a bit.

To try to fend off competition from Discraft, Wham-O introduced a 175 gram disc as well, called the U-Max. It also had some quality and consistency issues, and never gained much traction. Most players either liked the 80e or the Ultrastar.

Which disc was used in any given game became a hot button issue. Rob Rauch, the UPA Director at the time (and now the President of the World Flying Disc Federation), wrote in the December 1990 newsletter:

Discussions about choice of disc continue to be spirited in Ultimate circles. Many players feel strongly about their disc preference and can argue for hours about why their disc of choice is superior to the competition. There are certain games where, in addition to the disc flip to determine who pulls, there is a need for a disc flip to determine which half you play with each team’s Discraft or Wham-O disc.

That was the introduction of an article calling for submissions from manufacturers about becoming the official disc of the UPA for Championship events. A few months later, the ten person Coordinating Committee and three player representatives met in Eric Simon’s house to, we now know, decide which ultimate disc would reign supreme.

They selected the official disc on four criteria:

It was not a straight-forward decision, which was as much political as it was practical. Wham-O had been a big supporter of the UPA for many years, although support had waned in the late ’80s. Because of their historic generosity, many of the older members of the voting panel supported Wham-O. Younger members supported Discraft. The vote was very close.

With that vote, the Discraft Ultrastar became the official disc of the UPA. It has carried that distinction since that day.

But, years later, in 2004, Wham-O was trying to get back in the game. They wanted to make a disc that met the UPA’s standards and reached out to get the UPA involved in the process.

“What they had done was that they had gone out and done a bunch of focus groups around the country,” said Kyle Weisbrod, the UPA Director of Youth Development at the time. “And what they found was that ultimate was growing super fast, and parents loved it and kids loved it…They came and said, ‘Hey, we have some money.’ And we said, ‘Great we have some ideas.'”

But they would still have to clear the hurdle of UPA approval, which had particular specifications that Wham-O had not met in years.

“The interesting part of this was that the specs were based off of the Ultrastar mold in 1994 or 1995,” said Kyle Weisbrod, the UPA’s Director of Youth Development at the time. “By 2004 the Ultrastar mold had degraded to the point where the discs were out of specification, but because that degrading process took so long, Ultimate players were used to the Ultrastar as it was. Meanwhile, the Ultrastar mold wasn’t going to last for much longer — molds break after some time — so Discraft was in the process of building a new mold as well and they needed the UPA to be on-board with the transition to the new mold, lest they risk the problems that Wham-O had encountered years earlier.”

At that point, Licata’s disc standards committee was brought back in to oversee the process of approving discs for use and determining what standards they needed to meet. As hard as Wham-O tried (they sent the UPA twelve different molds for consideration), they couldn’t match Discraft’s quality.

That led to major disagreement on the UPA Board about how to approve discs. “[Board member] Henry Thorne argued that the UPA brand should only be associated with ‘the best’ and that the UPA should not approve a disc that didn’t meet that standard,” recalled Weisbrod. “I made the argument that we need a lower standard that is ‘good enough’ – the Wham-O discs would be better than the crap discs that were being used generally in Physical Education classes and, by partnering with Wham-O, we could really promote the sport to newer players through PE classes and retail.”

Weisbrod’s argument ultimately won out. “We ended up with two levels of approval because it’s just so darn hard to get people at the highest level to change,” said Licata. “Remember: for them, change is bad,” explaining that having a consistent disc is important to top teams.

At that point, Wham-O and the UPA partnered to put together a PE package — an instructional DVD, rules, a membership form, and a bundle of discs — that was widely distributed in the mid-2000s. “Their cash and in-kind donations were worth somewhere in the order of $300,000-450,000 during those years (almost 100% going to PE teachers and getting out in front of PE teachers)…Of all the things the UPA did during the last 13 years to grow the sport, I believe firmly that this is what has driven growth the most,” said Weisbrod.

For that reason, Weisbrod hates that people badmouth Wham-O. The first year that he and other UPA employees went to PE conferences to start pushing out their packages and material, he said “it felt like we’d talk to 100 people and only 5 people knew what ultimate was.”

The money Wham-O poured into the UPA makes it clear to Weisbrod that more competition between disc manufacturers would be a good thing. He thinks Major League Ultimate’s move to use an Innova disc is great for the sport.

“I think the community’s lack of acceptance of these companies has created a monopoly for Discraft,” he said. “I love Discraft, but the problem is that discs are the sport’s only equipment and our best opportunity for endemic sponsorship money. By swearing allegience to Discraft, we’ve basically shot ourselves in the foot from what is potentially a great source of revenue that won’t require making any changes that we don’t want to make as a sport.”

Licata is also a supporter of getting more discs into use, which is why he says he is involved on the disc standards committee at all. “I’m convinced that other companies can make good quality discs too, just like the people at Discraft,” he said. “…The fact that there’s controversy seems to me as somewhat superficial.”

He pointed out that this isn’t the first time a “pro” league has used an upstart disc. The Jose Cuervo Ultimate Championships used an Ultrastar in 1990 when the Wham-O was still the UPA championship disc.

So why is there resistance, at least from some, about using a new manufacturer for discs? Weisbrod thinks it’s part of the “identity of the subculture of ultimate.” Indeed, if you see someone throwing an Ultrastar, you can immediately pin them as an ultimate player. It allows those on the inside, who play the sport seriously, to quickly see who is still on the outside, like rookies throwing a Wham-O. Weisbrod also noted that “maybe there’s just a sense that Discraft has done a lot for the sport, and they certainly have. There’s no doubt.”

Regardless, he hopes that USA Ultimate starts to bid out discs, much like they bid out the merchandising for championship events. He explained, “I think there’s an opportunity to make a lot more money and increase the competition between those disc manufacturers.”

Comments on "When Wham-O Was King: Why The Innova V. Discraft Debate Is Old News"