October 16, 2013 by Charlie Eisenhood in Interview, Other with 9 comments 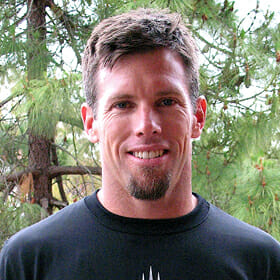 At 39 years old, Greg Husak isn’t the typical player headed to Frisco for the Club Championships in the Men’s Division. Then again, there aren’t many players with multiple college, Club, and World titles to their name flying to Texas either.

After five years away from the sport, the West Coast legend is returning to Nationals with the team that earned him his stripes over a decade ago, the Santa Barbara Condors.

Husak began his playing career in his junior year at the University of California – Santa Barbara in 1994, before some of this year’s Nationals attendees were even born. UCSB’s team, Black Tide, came into the year with big expectations, but found themselves reeling after a brutal Sunday at Regionals left them outside of Nationals looking in. Perhaps it was the sting of that failure in his first season that drove Husak to become one of the winningest players ever in ultimate.

Husak may have mellowed out somewhat on the field since his younger days, but he is still best known by his college nickname, ‘Hollywood.’ At 6’2” and hailing from Long Beach, with a personality many describe as flamboyant and a bit overconfident, it’s easy to see why.

Like many of the top competitors in ultimate, he comes from an athletic background. His father is the athletic director at Loyola Marymount University and his brother Todd Husak was the starting quarterback at Stanford in the late 1990s, eventually leading the team to a Rose Bowl appearance in 2000 and, after college, being drafted into the NFL in the Washington Redskins organization.

Like his brother, he took his sport seriously. A former teammate of Husak’s on the Condors in the early 2000s, Ryan Nation, said he was “relentless” – “definitely a type A kind of guy.”

“I brought high expectations of myself and my teammates,” said Husak.

Husak returned for his undergraduate senior year in his second season with Black Tide and helped the team win a National Championship. “That was my first exposure to real success at that level,” said Husak.

The frisbee bug had bitten him. With three years of college eligibility remaining, he signed on for graduate school at UCSB and took the team to two more consecutive titles, which included, in 1997, what he called “one of the most dominating performances at Nationals ever” by a college team.

That same year, he joined the local club team, the Condors. He, along with many of his college teammates, brought a new level of intensity, focus, and innovation to the team. “These Black Tide kids, including Greg, had a lot of ideas about things,” recalled Brent Russell, a former Condor and close personal friend of Husak’s. “A lot of them to be honest, I thought, ‘that’s stupid, that’s wrong. That’ll never work.’ But it worked!”

Russell said Husak had from very early in his career an “intellectual, cerebral approach” to the game, going so far as to call him the “West Coast [Jim] Parinella.”

When Parinella and Boston DOG beat the Condors in the 1999 National finals with an isolation-heavy cutting approach, it was Husak, as a captain in his fourth year on the team, that developed new drills designed to simulate the Boston iso sets. That year, the Condors finally overtook Boston in the semifinals and went on to win a National Championship.

“They were Champions,” said Russell of the Black Tide players. “They knew how to win and expected to win.”

By all accounts, Hollywood was the most dedicated player on the team, particularly as a leader. He and his Tide teammates compelled the Condors – who were dispersed throughout Santa Barbara, Los Angeles, and the Bay Area – to work out together. Husak brought his signature defensive intensity with him in his leadership roles – he was “no nonsense,” said Nation.

After the Condors won a Club Worlds title in 2002, the team was still very good, but didn’t put together another title run. The Championship era came to an end in 2004, after a loss to Team Canada in the World Finals and a subpar showing at the USA Club Championships. In 2007, Husak was hungry for another run at the title. The problem, though, was that the Condors simply weren’t the same team they were five years before. He looked north to San Francisco and noticed something.

“Oh, there are more players that I played Black Tide with on Jam than there are on Condors,” he said.

After some hard thought, particularly because he had many friends in Santa Barbara, he took his talents to the Bay Area. His wife already played for San Francisco Fury. It just made sense.

Jam was a team that had consistently been finishing near the top of the Club Championships, but couldn’t seem to break through and win a title. Once again, Husak had the magic touch.

After a semifinals exit in 2007, the team voted Husak captain after just one year with the team. He helped deliver San Francisco’s first-ever Open Division title. “That second year, they just looked to him and said, ‘Lead us,’” said Russell. “I don’t think they win if he’s not captain.”

Jam would be the third team Husak led to a Championship. I asked his former teammates if they could pinpoint what made him so successful. They found it difficult. But one thing was clear. “Greg certainly has it,” said Nation. “Whatever it is.”

Husak would not return for another season with Jam. Battered from over a decade of high level play, his body ached. His family and work was becoming increasingly important to him. He hung up his cleats.

Earlier this year, Husak realized something: “Gosh, my body feels good. And life is manageable right now.” He reached out to the captains of the Condors and said that, under certain conditions (like limited regular season travel and practicing), he would like to rejoin the team and try to help bring them back to the Club Championships after they missed out last season. The captains agreed.

So five years after winning a title with Jam, Husak is returning to the Club Championships with his original club. “It’s good to be back on the team,” he said.

The transition has been difficult at times. He has had to navigate a new role (offense) and a new reality in the Triple Crown Tour. The Condors, a Select Flight team, got limited chances against top level competition and mostly lost when they had those chances. Husak isn’t very used to losing.

“Think about in his career how many times he’s walked into a tournament and not expected to win the whole thing,” said Russell.

But he has embraced the new opportunity and tries to bring a veteran sense of calm and confidence to the young team. He’s even enjoying playing offense after being a defensive stopper his entire career. “It’s fun to be chased rather than chase the other guy around,” he said.

Accordingly, his motivational style has changed a bit.

He will walk onto the fields in Frisco this week as one of the oldest players at the tournament. He is quick to acknowledge that the Condors aren’t in the same tier as some of the top teams in the bracket, but his sense of pride about the team hasn’t gone away.

“If you smooth out the records over the past 15 years, the Condors are actually better than all these teams,” he said.

He is looking forward to again testing himself against the best in the country and thinks he could still be, like he was at Regionals, a “bit of a secret weapon.” He recounted a conversation from that tournament. A player who didn’t know who he was asked him, “Hey, you didn’t play on a team last year, did you?”

“No, I haven’t played in five years.”

“You took five years off and you go out and touch the disc whenever you want?!”

That is the kind of athlete Husak is, and the kind of reactions he’s inspired his entire career. But more than being just an excellent player, he plays the game the right way. Focused, intense, aggressive, but never outside the boundaries of good spirit. Now over fifteen years since his first Club Championships appearance, he’ll get an opportunity to bring that attitude once more.

“If you asked people, ‘Who was one of your favorite teammates that you played with in your career?’ he’d be on a lot of lists,” said Russell. “He’s gonna be a first ballot hall of famer.”