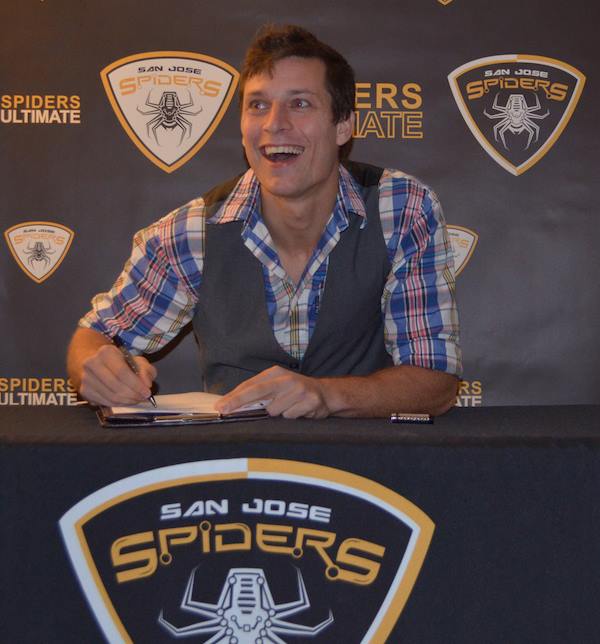 In the biggest offseason semi-pro ultimate roster move of the year, Beau Kittredge announced today that he would be signing with the American Ultimate Disc League’s San Jose Spiders.

“I am excited to join the Spiders,” said Kittredge. “[Spiders owner] Andrew Zill has had the most amount of love of ultimate that I’ve seen in an owner, and I’m looking forward to seeing what he can do with the Spiders and ultimate frisbee in general.”

Kittredge was unhappy with the MLU organization and told Ultiworld he had some conflict with the league’s owner, Jeff Snader.

“I thought there was no give-and-take in the MLU,” he said. “You are just owned as a player and everything is predetermined.”

Neither Kittredge nor the team would talk about the specifics of the contract he signed to play with the Spiders. Zill said the team is “creative” with their contracts — including things like paying for players’ participation in local leagues — and that Kittredge’s fit that model.

However, Kittredge downplayed the importance of the contract. “It might not be a money thing,” he said. “It’s more of a respect thing – it makes you feel more appreciated if people are willing to do more for you financially.” According to Kittredge, Major League Ultimate would not agree to alter the payment terms — $25 per player per game — for 2014.

Both parties emphasized that they were comfortable with the other and that they had taken time to get to know each other. Zill had been working on signing Kittredge since the end of the club season in mid-October.

“We feel great,” said Zill. “He wants to be a part of the organization. He is a fan of pro ultimate and wants it to succeed.”

Zill, who admitted he’s not deeply connected to the club ultimate scene, said he reached out to Kittredge initially through his children’s book website, Beau’s Books.

Kittredge said that he felt positively about the interactions he had with Zill and the AUDL.

“I’ll have a better chance to shape not just the team but the sport,” he said.

His signing with the AUDL marks the most important offseason roster move between the two leagues. MLU did sign David Brandolph — a 2013 Philadelphia Phoenix player and the AUDL’s Eastern Division MVP — to the Spinners late last week.

Kittredge mentioned that his discussions with AUDL owner Rob Lloyd, a high-level executive at Cisco, were also important to his decision to switch leagues.

“I think that someone with that much money coming to the league is important for its stability,” said Kittredge. “That’s someone who knows how to run something financially.”

Kittredge does hope to bring some other top players to the Spiders, although he said that there would be no “all [San Francisco] Revolver team.” The club team feels it is important to have the flexibility to make practices and early season tournaments by breaking up the team amongst various semi-pro teams.

Kittredge’s roommate and fellow Revolver star Ashlin Joye is negotiating a deal with the Spiders right now. “I think there’s a high chance that it happens,” said Kittredge.

Zill is pleased with the current makeup of the team and is eager to continue to announce more signings.

“One thing that has frustrated me was the assumption that everybody played on the MLU teams was going to return and we were going to be picking up the scraps,” he said.

Major League Ultimate did not respond to a request for comment by press time.