We’re not even really into the true College Season yet – making ranking, analysis, and storylines difficult to predict.  But a few big-name programs brought back tons of club talent and, even in preseason, looked poised to make a Nationals run.

UNC is one of those teams and their contender status is certainly bolstered by impressive fall results.  But what really impressed us from the Classic City Classic video was the variety of offensive looks from UNC, especially from their offensive line. To have a slate of three or four advanced offensive plays by the end of the fall is particularly impressive, given how it is still early in the season.

And UNC ran through their initial offensive action with the organization and precision of a club team.  Their offense has serious structure – and a variety of offensive looks.  UNC ran set plays out of horizontal, vertical, and side stacks.  The use of plays was obvious by how static the rest of the players are, disciplined enough to wait for the action to develop.  Most of these plays did indeed allow UNC to get to midfield before Florida State got a mark on – plus the occasional quick and easy goal straight from the pull.  UNC is already prepared and have done some early-season homework; they know exactly what is expected of them and are capable of executing.

Though almost all of UNC’s set plays feature Christian Johnson, this side stack play is used to get other players involved in the offense. 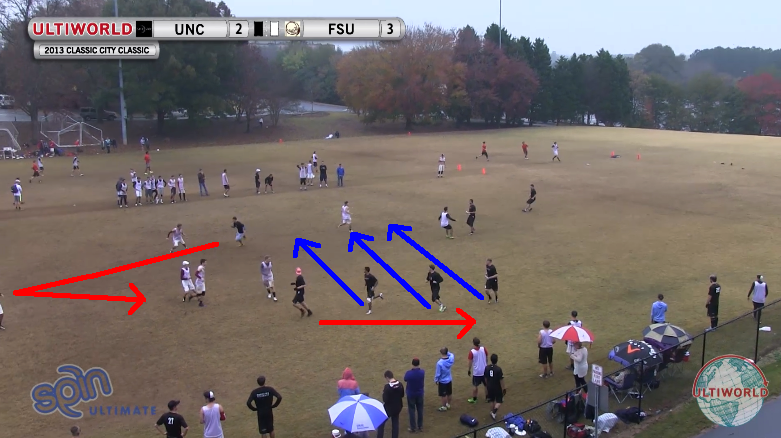 Johnson starts out isolated in space and immediately streaks deep. Because of Johnson’s speed and height, the defender on the back of the stack almost always drops off to help. The front three cutters flood to the middle of the field, leaving the back of the stack wide open coming under. Johnson comes under as the continuation and the offense flows from there.

UNC’s offensive line rarely throws deep on the first throw and they use the threat of Johnson going deep to open up other cutters. UNC is able to get 30-40 yards with this initial set and after it breaks down, they utilize their break throwers and quick handler movement to score.

This next play is a variation on a set used by both Sockeye and Johnny Bravo this season. Sockeye uses it to isolate Matt Rehder (see Sockeye vs. Goat from Nationals), Bravo uses it for Jimmy Mickle, and UNC uses it for Christian Johnson. 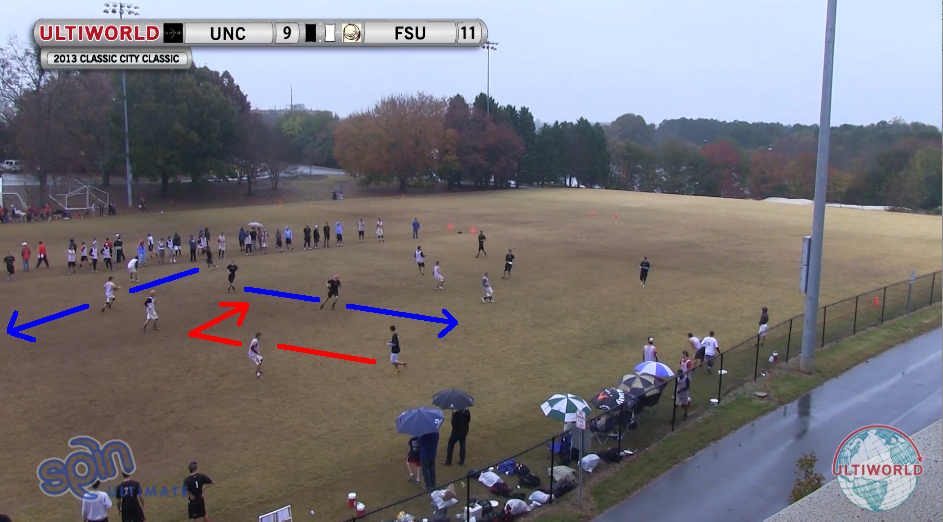 UNC starts off in a horizontal stack with Johnson on the sideline. As the disc is centered, the middle two cutters slash towards whichever side Johnson is on and the far sideline cutter busts deep towards the middle of the field, leaving the underneath space completely open. Johnson fakes out and comes underneath, and the far sideline cutter becomes the continuation cut.

With this play UNC gets half the field in two throws and they use their dump swing to get the disc quickly to the breakside. Nethercutt hits a high-release flick to Johnson and Johnson throws the IO flick for the score. This play highlights how fast UNC’s offense can be, but also how heavily they rely on Johnson and Nethercutt to get the job done.

UNC’s go to play when they need a hold is isolating Johnson deep and having Nethercut put up the huck. UNC plays percentages; they put their best thrower and best receiver in positions to make plays, knowing they will convert most of the time. 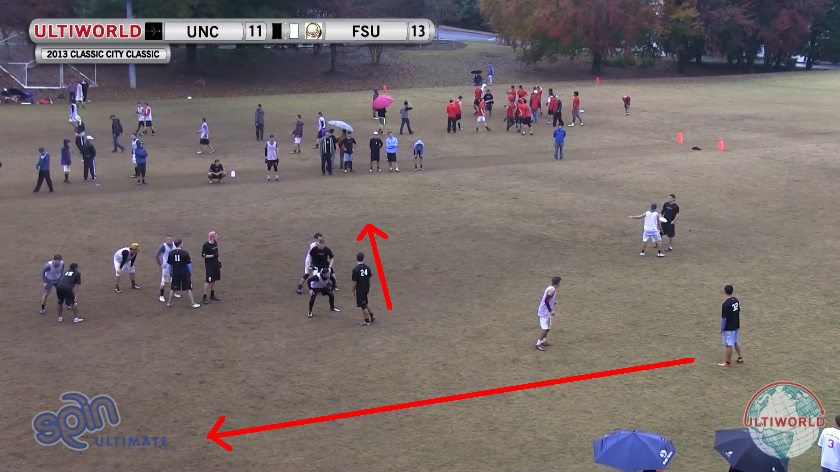 In this play, Johnson catches the pull and clears towards the breakside. Nethercut is isolated at the front of the stack and gets the disc in power position. As Nethercut works to get open, Johnson drifts up the breakside and uses his speed to blow by defenders.

In both these instances, Nethercut throws floaty flick hucks, with the confidence that Johnson will come down with them. Even with help defenders coming off the back of the stack, Johnson blows past them and makes big plays in the air.

Once they get to the red zone, UNC creates a triangle with their top three players and moves everyone else to the back of the endzone. This offense lets UNC exploit mismatches by  isolating Christian Johnson, Jon Nethercutt, and Ben Snell with plenty of room to work with. 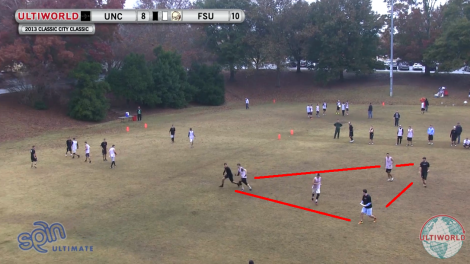 The triangle offense first originated in basketball, and although ultimate is clearly a different game, the two share similarities. In his book “Eleven Rings,” Phil Jackson explains that the triangle offense “empowers the players, offering a high level of creativity within a clear, well-defined structure. The key to this offense is each player’s ability to read the defense and react appropriately.” Johnson, Snell, and Nethercutt’s strong chemistry and break throws make this offense almost impossible to stop.

On the goal line at 8-10, UNC transitions into the triangle, highlighting both Christian Johnson and Jon Nethercutt’s aggressive outside-in flicks. When Snell drives his man force side strike, the mark on Nethercutt shifts to straight-up, Christian Johnson reacts to the defense, and Nethercutt delivers the break side flick for the score.

After a timeout at 13-13, UNC isolates Nethercutt in space while making sure to leave the break side open. Johnson immediately hits the around flick and eventually gets the disc back after a violation call. Snell drives his man strike into the break lane, and because UNC’s throwers challenge the break side so often, the defender overcommits and Snell catches an easy force side score.

After watching their tape from the championship bracket at CCC, we can identify one weakness in their offensive execution: backfield clogging.

This dump clogging problem isn’t unique to UNC’s sets – it can plague any team.  And to be sure, this challenge doesn’t arise on every point – but it did contribute to two of UNC’s turnovers against Florida State.

On a handful of occasions, dumps and dump throwers didn’t communicate well enough to provide clear reset lanes and progressions.  When resets hesitate, clog, or are slow to clear in the backfield, it becomes more difficult for the thrower to communicate clearing commands.  It also becomes more difficult for the secondary and tertiary resets to discern when to initiate their cuts.

The clogging usually occurs after a moderate upfield gain to a cutter coming out of the stack.

While the front of the stack will certainly be involved in the reset patterns, he bears the burden of stack maintenance.  With the best perspective of the backfield area, he needs to yell at his teammates to push the stack downfield and to get clear of the dump cut lanes.  It’s easy to get lazy after earning a 15-yard gainer or making your third cut without a catch, but continuous movement to the next position is necessary for a well-oiled vert stack.

Of course running set offensive plays isn’t the only way to play.  Some teams prefer to be more flexible and would rather implement loose guidelines or a play style rather than exact plays or movements. But UNC didn’t seem exclusively reliant upon their plays.  When the plays broke down, they looked to use their excellent handler movement to keep the disc alive while the cutters reorganized.  UNC looks to break the mark all over the field to gain yards and achieve the same effect as swinging the disc.

The blend of handler-led and cutter-led offence shows yet another string to UNC’s bow, and it is a powerful one as it allows them to adjust to specific defensive pressures, makes playing defense against them much more complex, and allows them to “rest” their key players while still allowing them to stay on the pitch, rather than putting second string players out.  Consider a tired handler in UNC’s offense; having bust deep after catching the pull for an easy goal the previous point, they can simply take the back seat for the next point in cutter-led offense.  They are still going to attract a strong defender – possibly one specifically assigned to prevent the deep cut – and so this is one strong deep defender kept away from the real cutting threats.  Besides, tall cutter defenders rarely make strong handler defenders, which just means anything else the UNC handler needs to do this point – like reset the disc – is going to be ever so slightly easier.