In the first article of the Club Video Analysis series, Martin Aguilera looks at Scandal's unique 2013 approach that netted them their first-ever national title.

Washington D.C.’s Scandal managed an unprecedented upset last year by defeating 7 time consecutive champion San Francisco Fury. This was a rematch of the final from last year’s U.S. Open, when Fury pulled away late to win 15-12.  It was clear at the U.S. Open that Scandal had the ability to play with Fury. But most people were still expecting a Fury team that had weathered storms in the past to rise up to the challenge of the final and win yet another trophy. Those people were wrong. Last year Scandal built upon a base they had been working on for a few years and developed a successful scheme that not only pushed them into the elite women’s conversation, but also now forces other teams to adjust to Scandal.

In watching film from Scandal last year, I noticed how much Scandal was like the 2012 and 2013 Miami Heat. Scandal had come to be defined by their accumulation of great talent and a frenetic defense that stifled even the most elite offenses. The Miami Heat’s defensive styling (heavy trapping and aggressive over-pursuit on pick and rolls) put offenses on their heels and set up quick transition dunks when they created a turnover. Similarly, Scandal employed a strong defensive strategy and wasn’t shy about fast breaking for the goal after a turn.

Scandal employed a defensive scheme that relied heavily on sagging reset defenders and abandoning players to play lanes. That scheme worked because they had athletes who could recover quickly. It really helps your zone, or pretty much any scheme when you have a player like Sandy Jorgensen (#37). In the zone clip below, versus Nemesis at the Pro Flight Finale, Jorgensen crashes an over the top pass to the center of the field as the deep1 then recovers in time to get the pass to the wide open streaking offender.

The credit for Scandal’s defense isn’t on the back of its speed in Jorgensen and Payne.  Much of the credit needs to go to coaches Mike LoPresti and Alex Ghesquiere for developing a solid scheme.  The Scandal reset defenders would drop into throwing lanes often and correctly.  While many teams are willing to sag off of defenders a few yards, they do it in a way that neither applies pressure to the reset nor really clogs the forward lanes.  In the pictures below you can see the difference. 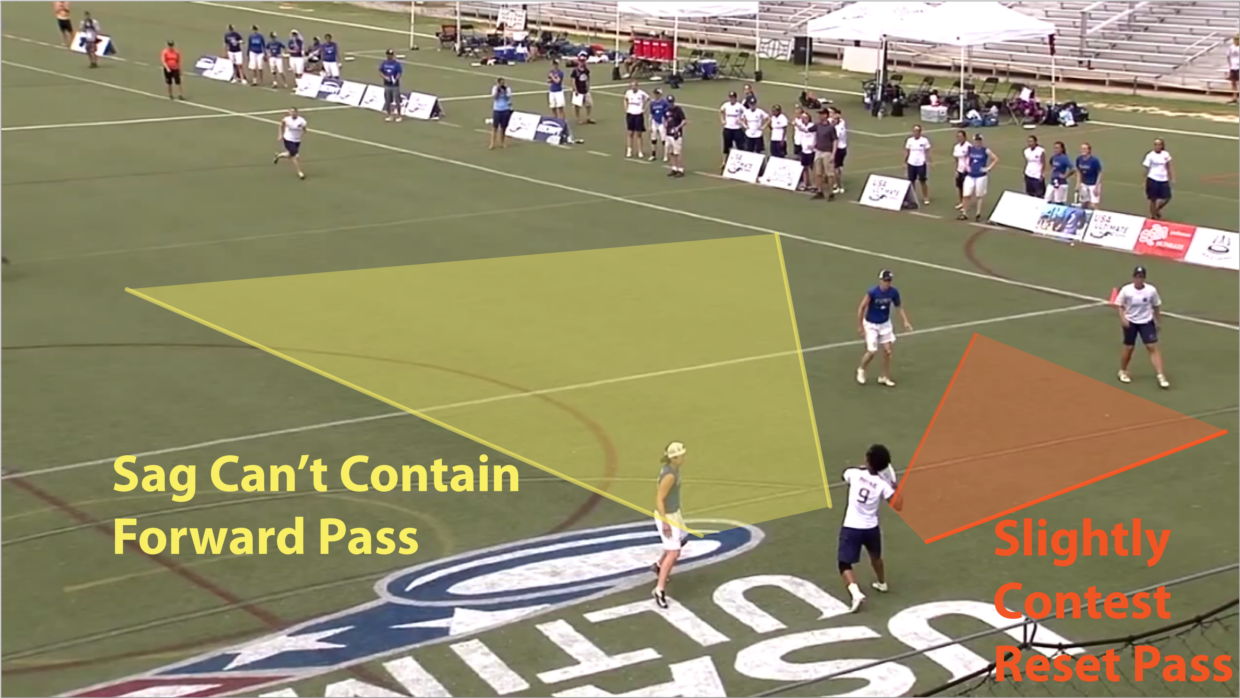 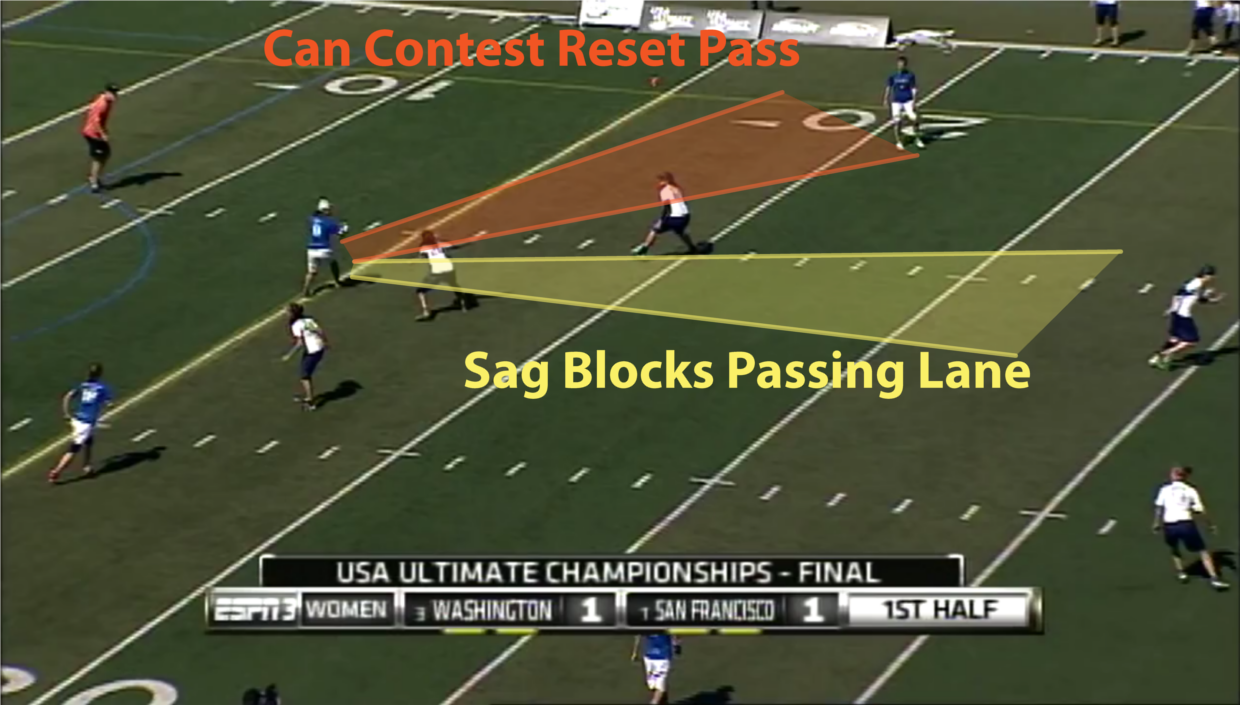 The big difference in these two sags is the level of commitment to the lane.

The proper way to run a sag is to get all the way into the lane you want to block, and to then rush back and recover when the time is right.  Yet many players only dip their toes in the lane and as a result neither take away the forward pass nor sufficiently frustrate the reset.  When done correctly, a sag can do both by anticipating when the thrower will look to the reset and recovering in time.  If we watch the full play from the picture above, we can see that is exactly what happens on Scandal’s sags.

The sagging defense continued downfield as Scandal players would often leave their defensive assignments to play in the opposing team’s open offensive lanes.  The first clip below shows Alicia White (#19) abandoning her assignment to prevent the forward pass.  In the second clip below you can see Kimberly Beach (#7) recovering on the forward pass to her person.  Look at how far away she is when she starts to recover.  In both clips Scandal is focused in on taking away the offense’s first option; Scandal makes closing those lanes a priority over staying close to your person.

Then, when White recovers, she takes a wide, lane-oriented approach– to stop any big breaks into space — rather than trying to catch up to her matchup first. The trade off here is that Scandal gives up a few seconds of stall count but takes away the easy textbook swing passes that offenses instinctively look for. As the around swing angle closes, a second Scandal defender poaches into the middle lane that you would expect the offense to look at next — before recovering to set a sideline mark. Fury got the yards, but in more three more passes than it may have taken without the initial White poach

While some players on Scandal poach in similar fashion, other Scandal players play tight defense except for key situations. Kath Ratcliff (#13), Allison Maddux (#5), Beach and Alicia White in particular are given the green light to abandon their player and play lanes. At times they will recover to their original player, but occasionally (as shown in the clip below) the poaching players will engineer switches to stay in the lanes. It is a difficult defensive option to maintain for more than a few passes. There are sequences with wide open offenders roaming the field, but Scandal’s sagging reset defenders effectively slow the disc down — giving the downfield poach and switch scheme just enough breathing room.

LoPresti and Ghesquiere have done an excellent job getting Scandal to work as a team while utilizing individual talents. Up and down the roster, it felt like Scandal put players in position to get the most out of them on the field. The obvious examples are the big names. White gets to be an excellent continuation cutter and gets in the way on defense. Ratcliff opens up the field and gets plenty of touches and chances to break the mark. Jorgensen gets to run long routes against deep threats and use her track speed.

But the real coaching accomplishment is how much LoPresti and Ghesquiere get out of the rest of their roster. Jesse O’Connor (#31), Lauren Sadler (#23),  and Alicia Kramer (#42) all get plenty of points and are playing up in big games. Each of them has a thing that they do well and are being put in situations where they can excel with that trait. Those situations don’t happen by themselves and the coaching staff needs to get credit for making the team better than the sum of its already excellent parts.

Offensively Scandal had a major shift during the season with the addition of Anne Mercier (#89). While this didn’t change the way their offense functioned, it was a huge improvement. Mercier’s hucks opened up the deep part of the field — reducing the amount of clutter in the front of the offense — and her ability to break the mark made Scandal’s handler give and go routes more viable.

Scandal’s offensive scheme asks most handlers to run these give-go routes even if they don’t get the disc. Prior to Mercier’s arrival, Scandal would at times find itself in a tough spot when resetting the disc. Mercier’s ability to break the mark and get open as a reset anchored Scandal’s offense, while her hucks served as the counter punch to the top-heavy handler movement by stretching the offense when it is needed.

Mercier’s appearance mid-season pushed Ratcliff out of the center handler position.  Ratcliff is an excellent thrower with the length to break the mark, but she isn’t the rock of a reset that Mercier is.  Pushing Ratcliff out of the center handler role allowed her to run more give and go routes because she didn’t have to stick behind the disc as the reset. The result was a double win for Scandal.  They got improvement not only out of Mercier as the reset, but also Ratcliff was able to generate her breaks and hucks from motion rather than stand still.

When Scandal’s offense is working well, it is because they are using quick passes to change the angle of attack and make it tough for downfield defenders.  They use a number of reverse elbow cuts, dishies, and around breaks to accomplish this. Ideally their handler offense looks like this:

While the motion isn’t Rhino-level constant, it successfully changes the lanes for White and other downfield cutters, making it easier for them to be open by mere opportunity rather than through long, tough cutting. It requires the defense to really be on top of the changing spaces or be out of position. Note in the first of the last two clips that Amy Hudson (#24) is at the athletic disadvantage against her defender (Claire Desmond – Fury #51) but still uses her spacing well to get the open pass and keep the offense going. Again, the coaching staff knew where to put people so they can be successful.

The challenge for Scandal this season will be figuring out how to maintain these advantages when the target is on their back.  They (like most champions) pushed the game in a direction last year and this year they will get to see teams respond with their own adjustments that exploit Scandal’s weaknesses. That is a huge compliment from the other teams and are a testament to what Scandal is doing correctly. You don’t want to make these adjustments; you have to in order to stay close against Scandal.

The first priority for opposing teams is to have a proper reset scheme where you get something out of the reset rather than just accepting it and carrying on. Scandal doesn’t seem to care about your lateral disc movement, and if swinging the disc from one sideline to the other doesn’t create open passes, then you are playing into their hands. Opposing women’s teams will need to figure out how they want to exploit Scandal’s sagging reset defenders, and the emphasis needs to be on getting a consistent benefit from Scandal’s strategy.

How to get something out of the reset

In this clip, Carolyn Finney (Fury #77) throws to the sideline and immediately runs to the power position in front of the disc. It both gives the new thrower an immediate target in front of the disc and opens up a pass in the opposite direction — making it difficult for the mark to figure out what to do. Scandal runs this exact same route. Often a key to beating a team’s defense lies in the offense that practices against them every weekend.

Another option might be more frequent flushing of the reset handlers. It creates lateral space around the disc and forces the reset defenders to either switch with a downfield defender or be horribly out of position. Either way the defense is paying attention to the cutters and not the disc. Fury ran this off of a pull at the U.S. Open and it generated an easy under pass.

Similarly teams are going to have to be able to find poached players quickly. One of the key principles of tearing apart a help-oriented basketball defense is to know where your player is by the time the defense shows help.  This can be very difficult for ultimate teams because of the size of the field and not having enough practice time.

At the very least teams are going to have to exploit Scandal’s tendency to have a wandering eye when an offender is clearing. In the clip below after Michaela Meister (Fury #16) throws the reset she clears downfield. White, her defender, stops looking at her almost immediately and starts looking at the thrower. At no point does Meister change the route she is running and force White to either commit her attention to Meister or be horribly out of position.

Lastly, and this seems like the easiest one to implement, you can expect teams to treat Scandal’s handlers with the same sort of sagging/poachy look that they deliver other teams. Scandal’s offense is predicated by handler movement and breakmark throws as opposed to strong cutting. Successfully stalling that next pass (as Fury does in the clip below) will at least force them into a different game plan.

Comments on "How Scandal Dominated 2013 — Video Analysis: Powered By Agility From Five Ultimate"