Centex offered a long, muddy look at many top contenders. Here's the breakdown. 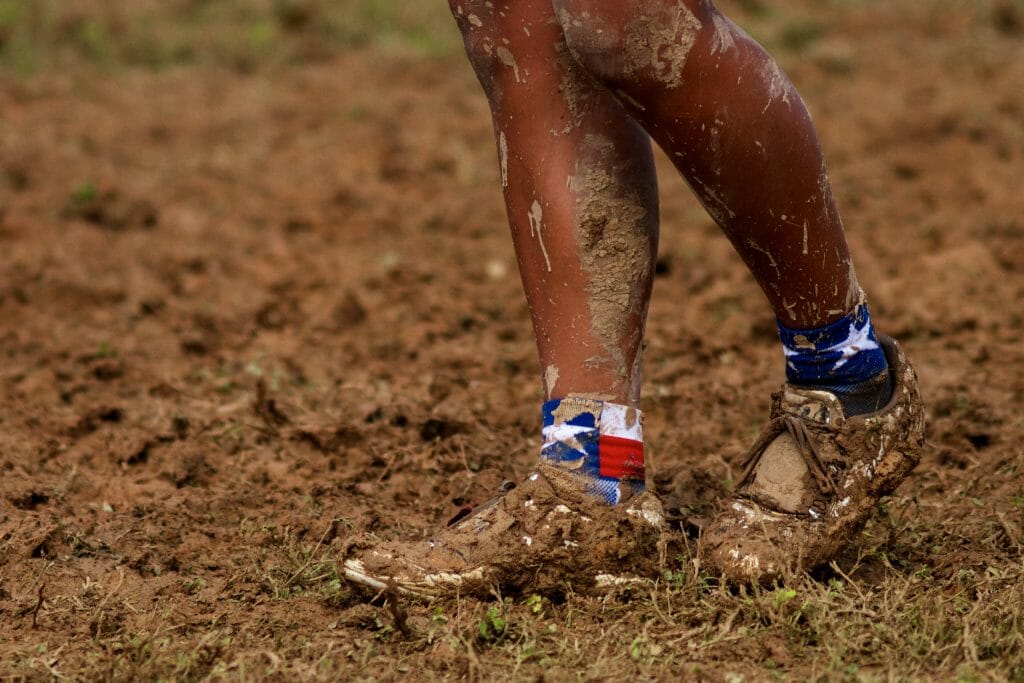 Be careful drawing season implications from the score of any game played on the Saturday of Centex. The mud wreaked havoc on every facet of the game, yanking handlers out of their pivots, making fast cuts laughable, and even weighting the disc down considerably.

Despite this uncontrollable, there was still a mental game to play, and many teams did not win on Saturday. Each team chose how to approach the mud. Some teams complained and trudged, but other teams embraced the mud, using it to practice bidding, as a rallying cry on the sidelines, or as an 8th person in their defense. The teams who will go far in the postseason are those who can get the job done, no matter the weather.

If you’ve been under a rock this month, this is what the bid field looks like for the women’s division:

Centex is where east meets west: teams from each coast face off, building a bigger web of connectivity that hurts some and helps others. Scott Dunham recently performed an analysis of what tournaments teams should attend if they want to earn their region another bid. He discovered the sweet spot is Tier II of Centex. This weekend the west hurt, the south rose, and the east held steady.

Indeed Tier II was a battlefield. The seeded teams may as well have been a deck of cards thoroughly shuffled. 2 seeds ended up at the bottom. 4 seeds rose to the top (three of them – Purdue, Colorado College, and Minnesota). Teams played close games, in the mud and out of it.

Tier I featured fewer upsets, but it nonetheless wrote crucial chapters for each team’s season. Some teams are playing to gain bids, but many are playing to ensure they win bids in April.

This weekend, Kansas and Colorado College delivered performances impressive enough to nab one of the Northwest’s copious bids out from under them. Kansas jumped 232 points, the biggest points gain behind the massive 302 gainer Colorado College pulled off.

Of these teams, Colorado College undoubtedly did the most for the region, quietly going undefeated and jumping in the rankings from 30th to 21st. Teams thrived at Centex through their mental game, an easier feat for Strata since their mental game was the singular focus of the tournament.

“We play well when we are having fun as a team, and this will be a huge factor in our performance at Centex,” wrote veteran Virginia Hill before the tournament.

Strata must have had a lot of fun: they beat California 10-6, Iowa State 13-6, and USC 13-4, to name a few. They have yet to play any of their main regional competition this season, but when they do, the teams above them should be very careful.

Colorado Kali’s only losses at Centex came at the hands of the two finalists, and their semifinals game with Florida State was probably the best game of the day. Kali was the only team who successfully read the FSU zone, thought about it, and changed their offensive tack. Indeed Kali executed at an elite level most teams didn’t reach at Centex. A good team will have a good offense, but a great team will be willing to change it if they have to. It should be a credit to Colorado that Megan Cousins wasn’t the shining star of their roster. Players stepped up across the board, from Kelsey Bennett to Kirstin Johnson and Lisa Doan. They earned their #5 ranking this weekend, they’re ready to defend it.

Kansas‘ story all season has been one of injury. Betty’s mental game this season has been superhuman; they have launched and won more comebacks than any other team. Yet faltering so spectacularly in the Centex finals, this late in the season, has to be a warning. Injuries are an issue for many teams, but they are only ever excuses for teams who are unwilling to adjust accordingly.

Again and again this season Betty has played an offense that doesn’t quite match the talent or chemistry on their field. Losing a star cutter to injury is nobody’s fault, but failing to change team strategy is a choice. Betty has plenty of talent. But they need to look at the players they will have in April, not who they have in casts on the sidelines.

Following a familiar pattern, California teams traveled to Centex, full of hope and optimism, and left with more red in their ledgers. California, UCSD, USC, and UCLA each dropped seed this weekend. Some fell further than others, but all disappointed.

While UCLA’s rank has actually improved after the weekend, their performance this weekend didn’t reflect their nationwide #4 ranking. BLU is undoubtedly good. Between Han Chen, Margot Stert, and Kristen Pojunis, they have built a chemistry rich offense that regularly delivers three to four downfield options to handlers. The team probably had the deepest roster of throwers at the tournament.

But a team that good should be able to beat lower-ranked teams, and they should be able to win tournaments. UCLA beat Central Florida twice on the weekend, but otherwise they left with little to show for their airfare. UCLA isn’t bid hunting, but if they want to be an elite team, they need to survive longer in elite brackets.

Between Tufts and Dartmouth, the Northeast strength bid is secured. But between Tufts, Dartmouth, and Northeastern, the bids are far from safely allotted.

Overall the Northeast Tier I teams survived the weekend, emerging with a combined game score of 6-6. Tufts went 4-2 while Northeastern went 2-4, yet both teams left with upsets to hang on their mantles.

Two of Tufts‘ wins counted more than their losses: on Saturday a late surge of energy gave Tufts a 10-6 upset over Ohio State, and Sunday morning they surprised Central Florida, winning 12-10. These victories helped Tufts rise 6 spots in the rankings to #11, passing UCF and OSU in the process.

Nobody shut down Qxhna Titcomb all weekend. Many teams tried, but then they blinked and she was lunging yards past their mark for her signature backhand break. The Tufts offense isn’t built around her, but her skills let the team do nearly anything they want downfield because Titcomb can send the disc their way.

Northeastern’s goal for the weekend was to prepare for the post-season, and their 2-4 record likely reflects where they are in their preparations. They have work to do, but they’re promising. Returners Mei Brust, Hannah Walters, and Melissa Ellis can still do a lot of damage, particularly in their big zone defense. A month may not be enough time for the Valkyries to rally, but their wins over Central Florida and Iowa State are still telling.

Southeast Shaping Up To Be A “Dogfight”

At times this weekend, Florida State and Central Florida seemed to be drafting off each other like NASCAR teammates. Both teams needed to keep their strength bid or earn another, and they needed each other’s help.

On Saturday, Central Florida lead the way for most of the day, winning games easily while Florida State struggled with the mud. Central Florida’s strategy was clear and focused throughout the day, even when it was hampered by conditions. Florida State, on the other hand, seemed spooked by the weather, making poor in-game decisions and faltering on defense. Both southern teams gave up in the last round of the day, opening their lines and holding out for a sunnier tomorrow.

On Sunday, the tables turned. The sun came out, and so did Florida State. Guns blazing, they battled against UCLA, making the top seed scramble to hold down their offensive points. They then burned through Colorado with the same blistering defensive intensity, and we all know what happened in the finals.

Central Florida likely had a similar game plan, but they couldn’t execute. They threw their signature zone against Ewo, and the Boston women were unphased. With little wind, they calmly worked the disc up through the UCF zone, and the Sirens never adjusted their strategy. Tilley is clearing using the same playbook as last year – and his puzzle pieces are still good – but they fit together differently.

While Georgia has one final opportunity to bring bids home, all three teams are preparing for a throwdown at Regionals.

“If it’s two bids…it’s going to be a dog fight,” says FSU coach Josh Boyd after their finals win. “[We] are three good teams, and we all play each other very, very close. We beat Georgia and UCF, Georgia has beat UCF and us, and I think UCF has beat both of us.”

Each Southeast team knows the post-season is a free for all. This weekend Florida State emerged the winner, but they know they’re never safe.

While recounting the mythical levels of mud on Saturday, a friend who has never attended Centex suggested if the bad weather continued for these tournaments every season, teams would just stop attending.

History shows a very different truth. Every year Centex grows, and every year the waiting list lengthens. There isn’t a better tournament in the Midwest for women’s ultimate. The allure is sometimes about bids, but it’s always about getting better. Many teams choose Centex over coastal tournaments every year because they understand what the event does for women’s ultimate, and they want to support the cause.

We talk about bids a lot in late March. But take a moment and zoom out the lens. This weekend forty-three teams descended on the Austin area. Almost a third of pool play games were upsets, and most of the bracket play followed suit. New teams faced institutions, and sometimes the new teams won.

The bids coming out of this tournament will matter in the next few months, but the games played will matter for many more years to come. A little mud isn’t such a bad price to pay, after all.