Santa Maria Sinks: A New Women’s Team And A Shakeup In The Great Lakes 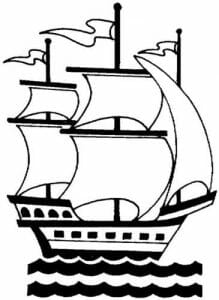 Santa Maria, the Pro Flight mixed team out of Columbus, Ohio, will not be fielding a squad for the 2015 club season, after being unable to make the commitment to USAU’s Pro Flight standards. Santa Maria’s dissolution shakes up an already volatile Great Lakes mixed region, while the exodus of its players will also have an impact, particularly on the region’s women’s division.

After initially forming in 2010 in an East Plains/Michigan Section that was dominated by Michigan Overhaul, Santa Maria first came to prominence in 2013, when Overhaul disbanded and left the Great Lakes Region up for grabs. Santa Maria was able to beat off a heavily favorited Indianapolis Interrobang! in the semifinals of the 2013 Regional Tournament, but wasn’t able to follow through in the finals, and lost to Cincinnati Steamboat for the single bid to Nationals in 2013.

Santa Maria came through last season, beating Interrobang! again in the Regional semifinals, and this time finishing off Steamboat to seal a trip to Club Nationals in Frisco, Texas, for the first time in the club’s history. Bolstered by a formidable women’s roster that included many members of recent the College Champion Ohio State Fever team, including Paige Soper, Cassie Swafford, Liz Gates, and Caitlin Harley, Santa Maria made a surprising run at Club Nationals, breaking seed to finish 9th with an authoritative pool play win over Slow White and bracket victories over Cosa Nostra and AMP. They also took half in pool play against the eventual champions, Drag’n Thrust, 8-5, but fell flat in the second half and lost, 13-9.

But the talent of Santa Maria’s women, which had been so integral in the team’s rise to the national spotlight, had gotten too deep for a mixed game’s gender limitations, and many of them have split off to form a new team in the women’s division. This has left Santa Maria without a significant piece of their roster. Facing a tight deadline from USAU to make the commitment to the Pro Flight, and with major holes in their roster, Santa Maria found itself unable to field a squad in 2015.

Flights Get Shaken Up

With Santa Maria sitting out, USA Ultimate had to alter the members of its Flight system. Filling in for Santa Maria in the Pro Flight is Philadelphia AMP, the team that Santa Maria had to beat to finish in the Pro Flight. AMP’s movement to the Pro Flight leaves an opening in the Elite Flight that USAU has filled with Madison NOISE. Whether NOISE’s position as the North Central’s Top Select team – the team that finished one spot from qualification from the Club Nationals Tournament – will be filled remains to be seen; any changes could impact bid priority for open spots in Triple Crown Tour events.

Santa Maria’s performance in 2014 suggested that it had finally taken a firm hold of the Great Lakes region, following Overhaul’s demise. Now that Santa Maria is gone, though, the region falls into disarray once again. Without a replacement for Santa Maria on the horizon, Columbus and central Ohio will be without a local presence in the mixed scene. The clear winners of a Santa Maria-less region are Interrobang! and Steamboat, who will find, once again, a void at the top and their teams in a position to fill it.

Of the two, Steamboat is likely the bigger benefactor. Their roster, released June 6, shows the addition of Santa Maria players Jeff Kula and Nancy Haskell. Additionally, Eliot Alexander and Nick Hamilton showed an interest in joining the team as well. While both Alexander and Hamilton chose to attend a tryout tournament for High Five, rather than for Steamboat, they still might end up on Steamboat for the season, as Cincinnati still has a few spots that it could fill. It’s worth watching to see if a new mixed team in Cincinnati, Goose Lee, might poach some talent away.

One surprise surrounding Santa Maria’s dissolution has been how many top players have left the region entirely. Paige Soper has reappeared on the west coast and will bolster Seattle Riot’s impressive roster in 2015. Cassie Swafford has joined the women’s team, Raleigh Phoenix. Defensive handler and the sport’s top journeyman, Mike Ford, has stated that he’ll suit up for Cahoots, a mixed team out of North Carolina. David Bentrovato, a top producer on Santa Maria’s men’s side, will play for the men’s team Michigan High Five.

This jettisoning of talent across the country has muted the impact of Santa Maria’s demise in the mixed and open circuits of the Great Lakes region. The same, however, cannot be said for the women’s side.

6 of the 11 women on Santa Maria have joined forces with other Ohio State Fever and Michigan Flywheel players and alumni to create a new women’s team. The new team, initially called Surge but now going under the name Rival, is loosely centered in Columbus, and is looking to draw players from central and northern Ohio and Michigan.

The goal, according to Santa Maria stalwart and Rival co-captain Caitlin Harley, is “to be competitive at Regionals this year, and to put ourselves in a good place to shake things up in the region.” Joining Harley on Rival are fellow Santa Maria players Kristen Smiach, Janine Walker, Alaine Wetli, Stephanie Miller, and Katie Backus. Rival’s roster also underscores the team’s draw from Michigan as it lists Flywheel players Hannah Henkin and Tracey Lo.

“That team’s going to be good,” admitted Izzi Bikun, a founding member and former captain of Cincinnati Flo. In past years, the women’s East Plains Sectional Tournament has been more or less meaningless, with all teams securing Regionals bids only to lose to women’s teams from Chicago.

“I’d be excited to see a good, competitive, women’s team come out of Ohio. We haven’t had one in a while,” Bikun said. “On a Sectional level, this really doesn’t do too much. The section is so small that we’ll still all get Regional bids. It’s going to be more interesting on a regional level to see how they do against Dish, Spicy Tuna, and Nemesis. Nemesis hasn’t had real competition for their Nationals bid for years.”

The creation of Rival, and the subsequent loss of women players to it, likely spelled the death knell for Santa Maria. While every player had their own reason for the move, Rival co-captain Janine Walker said that it was about keeping a good community together.

For Harley, these kinds of team changes are part of the territory in the mixed division, particularly in a city like Columbus that seems to be able to field 2.5 quality teams.

“The club mixed scene can be so erratic, especially for cities like Columbus, who are just on the cusp of having enough high-level club players for a competitive men’s, mixed, and women’s team,” Harley stated. “But since we aren’t quite there, we fall into this pattern of pulling together a strong women’s and a strong men’s team, then falling apart into a strong mixed and men’s team, and then repeating.”

This fluctuation put a strain on Santa Maria, as there just wasn’t enough room for the depth of talented women on the team.

“It was a tough decision to form a women’s team following a Pro Flight finish with Santa Maria,” Harley said. “But at the end of the day we knew that there would never really be an ideal time to form a women’s team. Plus, our women were eager to play in the women’s scene, again, and having a women’s team would hopefully give more opportunity for women to play ultimate in the area than a mixed team with only 10-ish spots.”

Comments on "Santa Maria Sinks: A New Women’s Team And A Shakeup In The Great Lakes"