Over any tournament – especially a three day’er like Warm Up – you’re going to see and hear some strange stuff that’s not necessarily related to Ultimate. When I notice it I usually flip to the back of my notebook and jot it down. These are the back pages.

I asked a young dude on Dozen what they were all about and he said, “They’re good because they help keep the wind off your face.”

I… I suppose they do. They’re equal parts bad ass and terrifying. If your school cut funding and you had to commit an armed robbery to go on spring break – you would want to have 27 of these for your team. I feel like there’s got to be a deleted scene from The Town on the director’s cut blu ray where Ben Affleck is wearing a skull gaiter.

I’m not sure Rivers Cuomo could pull off the little brim. You have to be abnormally thin, maintain some kind facial hair that involves the upper lip, and look like you really know your way around an espresso machine. 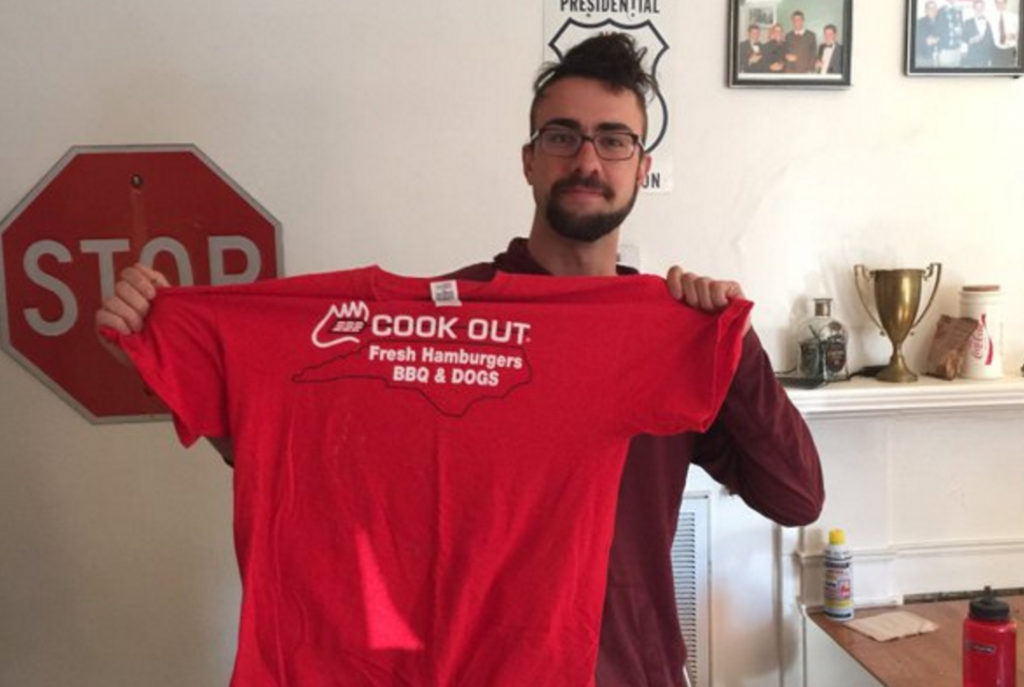 Virginia Tech won Warm Up’s fashion category by embracing an ultimate tradition as old as time; buying a bunch of bullshit shirts from the same place. In this instance, it was Cookout.

As things were winding down on Sunday, Charlie called me over to look at something on his phone while laughing hysterically. He showed me this tweet by Texas after getting another break to go up 11-2 on Arizona State.

For whatever reason, when I think of a team’s twitter account I always think it’s the person I associate most with that program doing the tweeting. Clearly, that’s wrong. It’s never that person. It’s always an idiot rookie or some poor hurt guy. With Texas, I imagine their coach Calvin Lin manning the Twitter (again, it’s not him). Picturing Lin being a low key DJ Khaled fan makes the tweet so much better. Imagine him waiting for the perfect multi break run to tweet out the Anotha One! picture…

“Oh, man… That’s our disc!” – some guy on the sideline after an opponent’s massive kick spike.

A guy made a solid deep cut and a nice catch to land about a yard from the end zone. One of his coaches turns around and excitedly says to me, “That’s a freshman!”

The rookie then throws a one foot pass straight to a defender.

Deflated, the coach turns back around. “Yeah. That’s a freshman.”

In drills before their Saturday showcase game against Pitt, some dude on Wisconsin got footblocked to hell and then, a few seconds later, was crushed in the back of the head with a disc someone tried to lag back to the throwing line. We’ve all been there.

There was a scary moment for Texas when Dillon Larberg got tangled up with his defender on an in-cut and went down clutching his ankle. After staying on the ground for a little bit, he took an injury and people began tending to him knowing that if he is badly hurt it will change TUFF’s season significantly. Larberg goes back out the next point and seems to be okay. Later in the game he skies a guy and throws a short assist. Then immediately celebrates with a standstill backflip.

You can really spot young players this time of year. A&M was up a bunch of breaks on Florida in pool play on Saturday and they had a guy out there that everyone was yelling instructions to. Timmy! Cut in! Deep, Timmy! Too deep! Back under! Back under right now! He was doing pretty well all things considered. He caught some in-cuts. Didn’t turn it over. Having 30 dudes screaming what are often conflicting directions at you for a few minutes straight is a lot to take in. I started daydreaming a little bit… You never know how a player is going to develop over the course of their college career. This kid could win the Callahan. I could be a middle-aged divorced guy working on my sixth beer after a summer league game talking about how I saw Timmy play before he was a household name – all the way back in 2016 at Warm Up. Timmy scored later in the point and his sideline went ape shit.

For the second year in a row somebody yelled “Penis!” during one of the many long stoppages in the final. There’s something about hearing a dude yell “Penis!” for no reason that just feels right. Like chicken soup. Lots of great nonsense phrases bubble up from the psyche of a young man when the opportunity to yell dumb shit arises. The Master P UHHH!… That scene in Goodfellas when Ray Liotta says “KAREN!” a hundred times… but when you’re looking for crisp and succinct, nothing beats “Penis!”

There are no observers at Warm Up. I’m sure some people hated it. I loved it. In all these highfalutin’ tournaments, we lose sight of the important things: rim spikes and players arguing in/out calls by pointing to meaningless marks on the ground. Seriously, as a spectator, the CSI “Look at this imperfection in the grass! That’s where my first point of contact was!” never gets old. I know that sounds sarcastic but I’m not kidding.

In 2015 I successfully did not touch a Frisbee at Warm Up and over three days that’s a pretty difficult thing to do. I was trying to do the same this year but it wasn’t meant to be. A disc caught an edge and rolled 15 yards away from a team’s drill right next to me and I had to give an elevator pitch to a college kid on why I couldn’t simply toss it back to him, which was a little unpleasant. I made the mistake of telling a friend about my abstention from plastic Saturday morning and he immediately (and probably rightly) tagged me in the shin with a disc from short range.

Sunday was Valentine’s Day and before Charlie and I had a romantic dinner in a semi-fancy Mexican restaurant at a table decorated with a solitary rose in a vase, we played nine holes of disc golf (since now I could touch Frisbees again). Charlie horribly shanked his first shot and ended up 30 yards into the ocean, so he had to strip down and wade out nips deep to retrieve the disc. Would’ve made for a great Ultiworld Live tweet but my phone was in the car.

The Trump rally happened at the University of South Florida while we were down there. I walked over and interviewed people about Trump or whoever they supported, then tried to slip in questions about Frisbee. Audio of that is forthcoming this week on episode 16 of Sin the Fields.

SPOILER: a surprising number of people think Marco Rubio would be sweet at ultimate.