A low, athletic stance can improve your pivoting, marking, cutting, and defense.

This article was written by guest author Will Sun.

You hear it all the time in sports. Your coach instructs you and your teammates to “get low” when marking. You get low for shuffling. San Antonio Spurs coach Gregg Popovich tells his players to get low when performing a jump stop in a drill. Dylan Freechild in a RiseUp video on cutting says to get low when deaccelerating so you can then explode out of a cut.

But what does getting low mean? The majority of players lack technique training so they do it wrong, slowing themselves down, losing their balance, and putting unnecessary strain on their knees. There’s a world of difference between the untrained low and the trained athletic low. In this article you’ll see the movement pattern for how to athletically get low, and its game-changing applications in throwing, marking, cutting, and defending.

What we are talking about is the hip hinge, or squat stance.

It’s how Marisa Rafter gets more1 hand/footblocks in her Callahan video.

It’s how Ashlin Joye’s pivoting is smoother than Kerrygold butter.

How do most players get low? Most people bend first/mostly at the knees.

See how my knees go past my toes and my weight is shifted forward? That puts a LOT of strain on knees. Unfortunately, it’s how many people demonstrate or learn marking — and it can absolutely wreck knees throughout a playing career.2 In the weight room, this knees-first squatting is the most common mistake seen in novice lifters.

To fix this technique, focus instead on hip hinge. This is accomplished by unlocking your hips and pushing them back.

Your hips should be the first things to move, not your knees. There is less strain on your knees, and they don’t go past your toes.

The only person I have heard talk about this movement in terms of ultimate is Jools Murray, strength and conditioning coach and head coach of U23 Great Britain men. She teaches her players the hip hinge by having them imagine having gotten out of a car and then closing the car door by pushing back with a little butt bump. She cues them with, “Shut the car door!” and tells them to use that stance for marking, throwing, squats, deadlifts, etc. Having people sit down in a chair shows that the hip hinge is a very natural movement. So “Sit back” may be a good cue on the field as well.

Couple that with Steve Joye’s mantra3 to always be on your toes (balls of your feet) for quickness and you will find you have a very well-balanced, agile, and athletic stance for throwing, marking, cutting, and defending.

This balance is why Marisa Rafter is able to shuffle so quickly on the mark, and also kick out her foot for a footblock while remaining perfectly stable and not losing her balance.

The hip hinge also benefits throwers. Not only does this athletic stance provide incredible balance, it also affords quickness in pivoting to break the mark. Watch it again with the Ashlin Joye clip.

Here are contrasting examples to show the point.

In the first clip, I stood up as I pivoted across, creating a longer line for my center of gravity to travel. 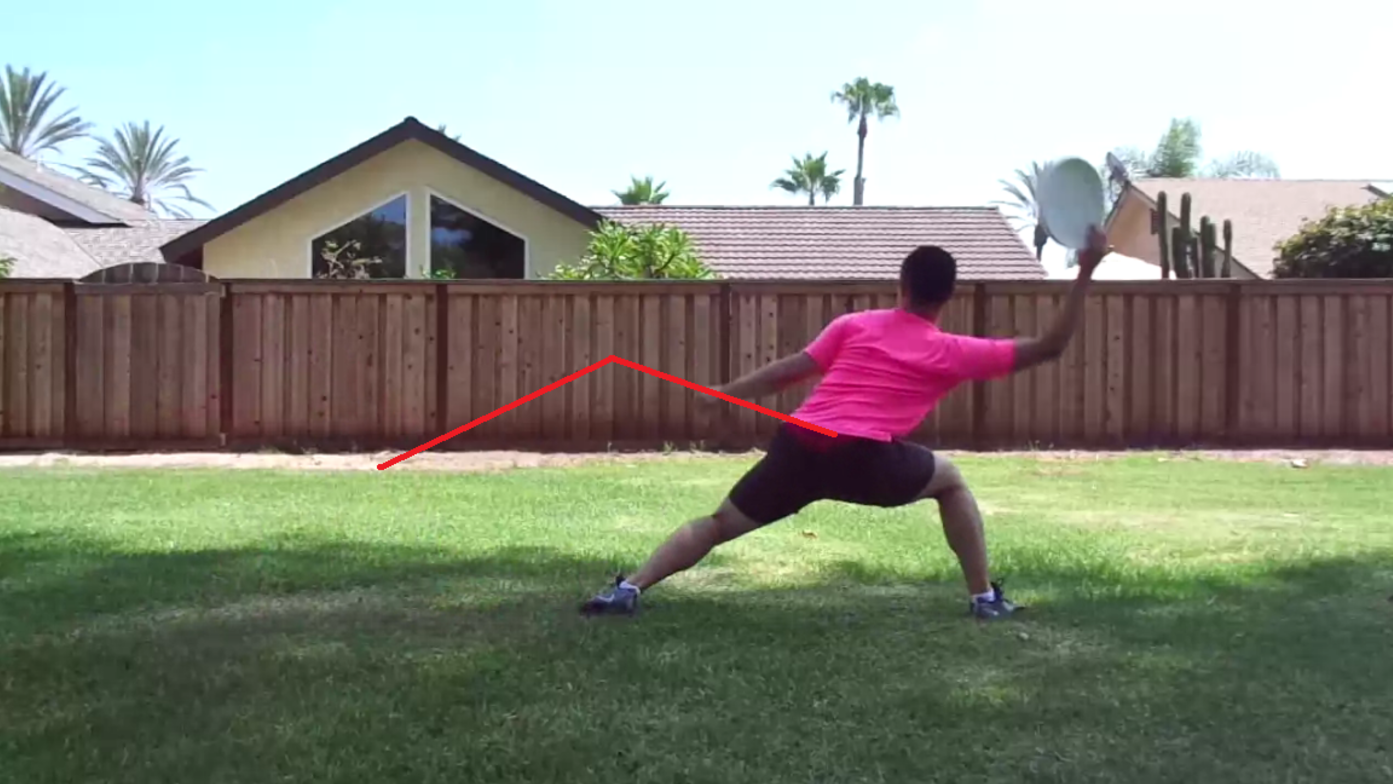 In the second, I maintained a low, athletic stance through hip hinge and shortened my pivot across. 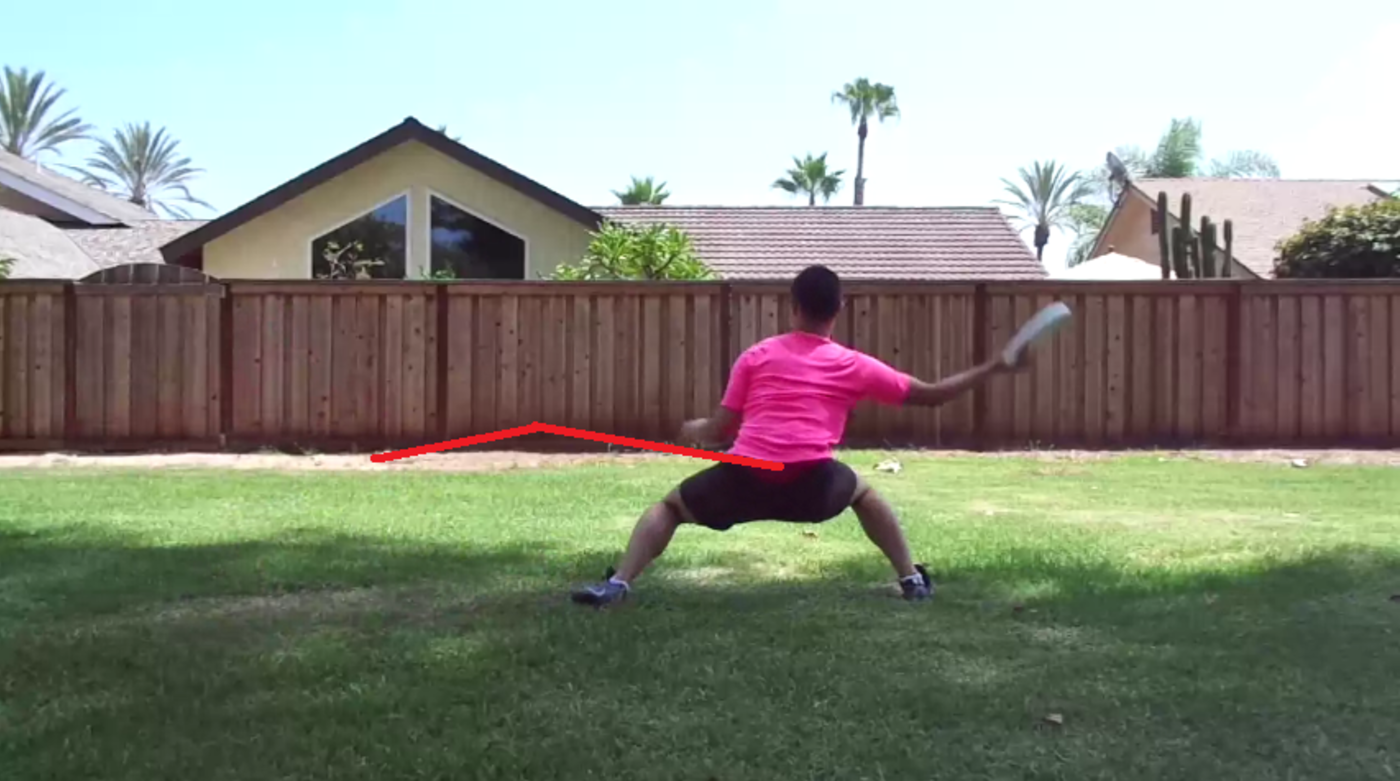 Watch what happens when Jeannette Quach of Toronto 6ixers stays low and pivots with balance while her opponent leans forward on her mark, putting herself off balance.

This skill is also useful in defense away from the disc. In the clip below, Sam Kanner gets his center of gravity low to maintain balance allow himself to shift quick side-to-side. In so doing, he effectively mirrors his opponents cut and shuts down the dump option.

Many players use this squat stance without realizing it, or without consciously recognizing all of its advantages. People with weightlifting, basketball, martial arts, or other sports experience may have learned it long ago and do it naturally on the ultimate field. One former teammate told me that his high school basketball team would do little competitions in practice, seeing who could shuffle in a squatted defensive stance for the longest time. Unsurprisingly, he used the hip hinge squat stance naturally when guarding a cutter downfield. But he admittedly had never thought about it’s advantages for throwing or marking.

It is important to note that employing this skill essentially means holding a bodyweight squat; you should expect your legs to fatigue quicker. Make sure you use similar form while training — at practice and at the gym — to prepare to maintain this position longer.

Also, stretch regularly. If you spend too much sitting during your days, your hip flexors can shorten and will feel tight or cramped when performing the hip hinge/squat. Melissa’s Witmer offers advice on stretching in this article to avoid pulling your psoas.

Playing low is not a requirement of playing well. Alan Kolick is one prime example of a world-class player who is able to thrive while keeping a high center of gravity. But getting low can increase balance and quickness. In a sport where every inch matters at the highest levels, this may be the difference between getting a break throw off or getting handblocked.

What are your thoughts on the hip hinge/squat? If you use it already, do you do so consciously or unconsciously? How did you learn about it? Does your team talk about it? Comment below!