Editor’s Note: This article contains NSFW language. After the initial publication, some parts with offensive language or imagery have been redacted.

Another long weekend of college dudes stretching their legs after a long winter’s nap in the bright, observer-less sunshine of Tampa. While rim-spike stock was down this year (which is a bummer), the fact remains: no observers means no rules!

And no rules make for great spectating. Without the presence of those in orange, there’s always the chance that the tournament can spiral out of control and into something that resembles a SyFy original series about a penal colony set in 2050. A bleak dystopian future where there are no authorities to police how far onto the field you can stand.

Act I: A Series Of Scenes

There was a lot to be excited about in Tampa. For as much as people think this is still a tune-up tournament, you can’t force a bunch of college dudes who have been cooped up inside all winter, stricken with cabin fever to do anything but go hard at an affair like this. Of course, there’s still a lot of rusty, sloppy ultimate. I watched Harvard and Cincinnati in the first round on Friday and each team had an uncontested stall. I don’t think I’ve seen two stalls in the same game in my last 12 years playing summer league.

Song Of The Weekend

The theme song of the weekend was set early. Sometimes a song just takes over the weekend. Sometimes multiple weekends. Or years.1 As I was waiting for Charlie and Prentice to pick me up in the arriving flights area, three idiot freshmen (90% sure they were from Northeastern) were slapping around while waiting on their own ride at arrivals. The obviously coolest member of the trio sat by himself on a bench and whistled Young, Wild and Free by Wiz Khalifa ft. Snoop Dogg, which became the never-ending earworm of the weekend. You know, there’s like 10 seconds of silence in the car and out of nowhere you just start yelling the hook: BA NAH NA NA NAAAAAHHHHHH, BA NAH NA NA NAAAAAAHHHHHH until Charlie tells you to “Please stop!”

In Brief Praise Of Jerseys And Rosters

First and foremost, shout out to Brown for having all their names and numbers (even the rookies) on their USA Ultimate page. I cannot express how much of a help that was. There’s a reason Brown is the first name you see when you Google “Ivy League Schools” and I’m pretty sure it has nothing to do with the alphabet. Well done, gents.

A Rivalry For The Ages

Florida and Wisconsin is one of the best out-of-region rivalries of all time–and as the rivalry has ebbed and flowed, the happy constant is that they will play one another at least once each year at Warm Up.

I talked with longtime Florida coach Cyle Van Auken2 before their yearly meeting with Wisconsin and jokingly made a quip like, “You probably have a tattoo with the recent record agai—” and Cyle just cuts me off with, “We’ve won 14 of the last 20.”

He just knew that off the top of his head and was ready to tell anyone who would listen. That’s incredible. That’s what college ultimate should be about. Florida beat Wisconsin 13-10 two hours later. Make that 15 of the last 21.

I’m a handler. I get excited to watch awesome handler play. I’m not talking about the handlers that actually move well and score goals–only the ones that break the mark in abusive street-ball style ways but don’t necessarily help the offense.

As such, I was really excited to see Auburn Aetos’ Eric Sjostrom play because he can fucking BREEEAAAK. So I’m watching Aetos play Minnesota and Sjostrom looks terrible. Like, he’s playing terrible and he physically appears terrible. He looks sick. Green in the gills, like he might barf at any moment.

In the middle of the fourth point or so, Sjostrom calls an injury and comes to the sideline. His teammates seem to know something is bothering him and after the point ends he takes the long walk across the field towards the bathroom.

Sjostrom was out with the flu the rest of the weekend. At this point Auburn is probably sunk so I spin around and start watching Florida and Northwestern. After halftime and Auburn dude comes over and lets me know that, due to some kind of puking aversion, Aetos player Sam Smith put his hand inside Sjostrom’s mouth viper-style to try and make him throw up. I want to call that guy the Teammate Of The Year, but there’s always some weird dude on the team–every team–who’s eagerly volunteering for gross details like that. So…good on you, Sam.

On Saturday morning, a fog that rivaled Stephen King’s short story The Mist swept over the fields at the University of South Florida. It actually may have been the same mist. No one can be sure. But just like the insects in The Mist that made grown adults question what’s right, wrong, and the existence of God, the underdogs crept out of the fog and put doubts in the minds of the higher seeds. Oklahoma was taking it to LSU at halftime 7-3. The self appointed Most Disrespected Team in America Illinois State was taking half 7-5 on Northeastern with incredible plays.

Up was down. Left was right. Dogs were favorites. Yet, as the fog slowly burned off, the world of college ultimate slowly blinked back into reality. Both Oklahoma and ISU ended up losing. I played five years of college ultimate on a team not unlike Illinois State–and I loved the way those dudes hung tough against a super system team that they were comparable with in top talent but way behind in terms of depth. And had Twitter been around at that time, I would now be too toxic a person to even write for Ultiworld. Respect, ISU.

Virginia Tech Burn had this gas jug bit going all weekend and it was a huge hit. There are two bad things that can eventually happen when this sideline gag runs its course. One of them is a gas tank full of water and the other is way, way worse.

Yo. I wrote about this young man when he was a clueless rookie in a cotton shirt in 2016. I wrote about him again in 2017 when he got jacked and carved out a role for himself. I’ll be honest–this started out as a bit of a hoax. Yay! Timmy! Wouldn’t it be fun if this guy got good and won the Callahan! Haha! I like fun things! Go, Timmy! But shit has gotten real. Before our very eyes, Timmy, once a boy, has become a man.

From where Timbo was to where he is now… it’s just two different players. It’s like when Mickle went from his freshmen to sophomore year and grew 11 inches, put on 80 pounds of muscle, and bought a Porsche3. Timmy is now an O-line starter and on kill lines when A&M needs a break. This dude gets Ds–and Dozen is lucky he’s not two inches taller because he’d be playing cornerback for the Aggies right now4. I don’t know if the game has slowed down or he’s gotten faster, but the Road Dogg is flying down Fury Road and everyone else is just another blood bag.

“Looks like you guys are having fun out here. I’ll bring my cleats next time. I played a little bit in high school.” – A local pizza guy who delivered two pies to team Ultiworld at the fields. Florida has always lacked infrastructure at the youth level and I think it’s great that this local guy wants to get involved with ultimate, so I took the liberty of putting him on Tulane’s roster for the series.

“You can tell they think they’re so much fucking smarter than us.” – A Connecticut player in the early goings of their 13-8 loss to Brown

“I think we’re going to be the bid killers. Like, if you lose to us, you’re not getting a bid.” – A coach that I happen to agree with

Your parents want to support you in all that you do because they love you–not because they can relive their honeymoon in the temperate February Tampa weather while you’re not on the field! THEY JUST WANT TO WATCH THEIR KID PLAY. WHAT’S WRONG WITH THAT?!

An oblivious Auburn dad wandered onto the field during a drill and, in a complete role reversal, had to be reeled in by his son with a “Dad. DAD. DAD!” …and the cat’s in the cradle and the silver spoon, little boy blue and the man in the moon…

A Texas A&M mom caught an awful pull that went out of bounds while sitting in a chair and briefly basked in raucous applause. 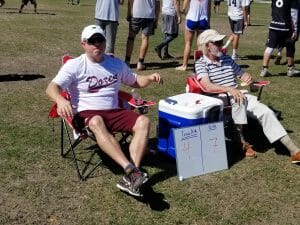 This is actually a public service. These Texas dads might not know fuck-all about this sport but they know what a goal is.

Central Florida, whose football team unquestionably won the NCAA National Championship in football this past season, paid homage to their pigskin brethren this year by full-subbing their jerseys with the Knights record. School pride for the win!

Back At The Ultiworld AirBnB

The Olympics are fun. Less fun that NHL players weren’t able to play this year, but still, watching these once-every-four-year sports is a good time. Me personally? I’ve never been skiing. That’s not a knock on skiing, I’ve just never done it. The point is, I don’t know anything about skiing. Or figure skating. Or the biathalon. And if you’re like most of America, neither do you.

Watching the Winter Olympics is what it’s like when regular folks watch ultimate. You can have an opinion. But at least have the self-awareness to know that you’re probably wrong. I realized this while listening to Chuck and Prentice prattle on about how well (or poorly) someone was doing during fucking downhill slalom and it was fucking maddening. I could’ve sworn we were in Tampa to cover luge time trials.

I’ll leave you with this…

The USAU event page will say that Carleton won 2018 Warm Up. It can say that… but that doesn’t make it true. It was this weird dude from Arizona State that looks like Joe Dirt and Steve Prefontaine simultaneously went through the transportation pods in The Fly. He actually won Warm Up. I want to party with this dude.

Comments on "Florida Warm Up 2018: The Back Pages"