It was the first major week of competition in the AUDL, and it did not lack for drama! Some huge upsets (home teams lost five of the weekend’s eight games) have laid the foundation for a wild 2018 season. Let’s look at some of this week’s stories.

The Roughnecks Ground The Flyers In Raleigh

This past weekend we saw the highly anticipated rematch of the 2017 South Division Championship game: the Raleigh Flyers vs. Dallas Roughnecks in North Carolina. In a last minute change, this game claimed AUDL’s Game of the Week status and was streamed live on Stadium, stealing it from the DC Breeze-Montreal Royal matchup due to poor forecasted weather. Raleigh will now be highlighted in a total of five AUDL Game of the Week features on Stadium.

Despite the back to back Flyers appearances, I am sure no one was too upset to watch the two powerhouse teams look to make their mark on the early 2018 season. Raleigh may have clinched the South Division during the regular season last year, but Dallas again got the win that took them to the semifinals and AUDL championship weekend, leaving Raleigh behind to reflect on their game day mistakes.

The 2018 preseason AUDL Power Rankings largely focused on each of these teams’ player gains and losses. Raleigh is predicted to come out on top of the 2018 AUDL rankings, and for good reason. But it appears Dallas is out to prove that a team is more than its returning stars (or lack thereof) as they pounced early to build a first quarter lead and hung tough late to beat Raleigh 17-14, despite the Flyers’ home-field advantage.

At the end of the day, a road win is a road win: Dallas soundly lost to Raleigh on their turf last regular season. Now, with just one victory, they’re back on top of the South.

In the first cross divisional game, the Seattle Cascades took down the Minnesota Wind Chill 29-28 in a contest that came down to the final seconds. There’s still snow on the ground here in Minneapolis, but Minnesota was able to fly out to Seattle and be competitive with the Cascades.

Josh Klane had a team-high seven assists, 71 completions, and 33 points played for the Wind Chill. Michael Jordan (you read that right) had a team-high six goals for Minnesota. The Cascades spread the disc around more, but Mark Burton led the team with a whopping six goals, five assists, and three blocks.

Give the Wind Chill a little more outdoor practice and I think this game turns out different. But Seattle looked very solid despite a lot of roster turnover, integrating some talented young players effectively. The Wind Chill hope to avoid a 0-2 start April 14th against the Madison Radicals while the Cascades look to get off to the hot 2-0 start against the San Diego Growlers.

Reed Hendrickson is a damn baller that you need to know about. He has killed it this season for the #4 Washington Sundodgers in the College Division, and now he’s got himself a top 10 appearance with this full field cut and layout:

Hey Greenie! It’s not a touchdown! In fact, it wasn’t even a score! Ah well. They were into it.

Alex Duffel as the Joker

That’s the Seattle Cascades’ Alex Duffel rocking full Joker makeup. As crazy as it is that this was allowed by the teams and referees, here’s the story from Duffel himself:

“Mark [Burton] and I throughout the years have gone by various duos like The Hardy Boys or Merry and Pippin. We have a saying, I cause the chaos in the streets and Batman (Mark) always cleans up my mess. Considering that we’re on the O-line together, we found it to be applicable, plus we like to add character to the environment.”

The Tampa Bay Cannons had a surprisingly confident entrance into the season against the Raleigh Flyers last weekend, but the Atlanta Hustle spoiled the party with a 17-15 win over the Cannons this weekend. Despite the loss, the Cannons’ coach Andrew Roca again stole the show with his continued creative costuming.

Inspired by famous coaches, last week his getup closely resembled Mike Ditka, this time channeling New England Patriots head coach Bill Belichick sporting a hoody with cut sleeves (and a headset). Think about why he’s dressed as Belichick…2 What will Roca wear next?

The Stadium App Is Sweet

For the second straight week, the Stadium app has been great. Really high quality and professional. Lepler is great. I hope this partnership continues. My one gripe is that there is seemingly no way to use it on my Xbox One.

There was lots of action on the left coast in week two. We’ll start in SoCal, where the Los Angeles Aviators soundly beat the San Diego Growlers 30-17 to kick off their seasons.

The Aviators pulled away early behind impressive performances from returners and newcomers alike. Tim Beatty, Eric Lissner, Eli Friedman, and Tom Doi had typical strong performances, and it was nice to see Mark Elbogen back after tearing his ACL last summer.

The star of the game, though, was clearly Chris Mazur. The former Dallas Roughnecks (and Connecticut Constitution!) handler stole the show, throwing seven assists and catching two goals with just one throwaway, playing primarily on the Aviators D-line. He was equally comfortable launching a 70 yard huck as he was going every-other to slice through the Growlers zone. If he continues to play at this level (and there is no reason to expect he won’t), he could be the key to pushing the Aviators to a division title after a second place finish last season.

The Aviators also got big contributions from some lesser known names. One that stood out was Sean McDougall, who made stand out plays on both sides of the disc. His stat sheet only shows 2 goals, 2 assists, and 2 blocks, but he put consistent pressure on Growlers cutters every time he took the field. His goals both came on long hucks, the second of which he caught while being tackled by a Growlers defender and after getting a block despite wearing a broken cleat. With strong contributions from role players like McDougall, the Aviators could be the team to beat out west.

The perennial semifinalist Madison Radicals topped the Indianapolis Alleycats 20-13 on Saturday. The Alleycats do not have a single win over the Radicals in the history of their franchise. Five years of futility.

Madison looks poised to continue their reign of dominance in the Midwest.

Why throw a backhand when you can swag out like this:

The Defending Champions Go Down

No Beau. No Ashlin. No Cassidy. Just eight returners from Opening Day 2017. We last saw the Flamethrowers taking down the Toronto Rush in a thrilling 2017 AUDL Championship game, but the 2018 team is missing many of the stars that contributed to that title.

They didn’t seem to mind in their season opener against the San Jose Spiders, scoring a break on their first point with new addition Hunter Corbett throwing the goal. Gusting winds and first game nerves led to a lot of turnovers in the first quarter as both teams looked sloppy.

Justin Norden ably took the reins for the Spiders D-line (after playing offense for much of 2017), providing a steady presence in the wind. He was able to marshal the team for a few breaks and a 11-8 lead through the first half before the conditions became more favorable for throwers.

Former Flyer Mark Lin was very active throughout the game on the Spiders O-line, scoring four goals and throwing two assists, often as the initiating cutter. He also was the Spiders’ primary hucker, unlocking the deep space for an offense that has the downfield athletes to exploit their matchups. Shane Earley, in particular, was constantly open for San Jose’s offense, finding space between Flamethrowers defenders but had to sit out much of the second half with a leg injury. The Spiders offense as a whole looked almost unstoppable in the second half.

Eli Kerns expertly ran the San Francisco offense, connecting well with backfield partner Elliot Chartock, who was an impressive 45-45 with two assists (including an upwind hammer to end the first half) in his first pro game. The Flamethrowers chemistry was on full display, as Kerns, Greg Cohen, Marcelo Sanchez, and Antoine Davis weaved between Spiders defenders, dominating their offensive points with speed and skill.

San Jose held a three- to four-point lead through much of the second half, but San Francisco crept back, catalyzed by Sonny Zaccaro’s premature spike midway through the 4th quarter. Zaccaro had a stellar game, throwing eight assists for the Spiders, but caught an upline pass inches outside the endzone and immediately spiked the disc (thinking he scored) for a turnover.

After a timeout, the Flamethrowers slimmed the lead to two, followed by a break on a marathon point to trim the lead to one. Two quick holds left San Jose up 21-20 with 1:46 to go. San Jose’s handlers swung the disc around for over a minute before Antoine Davis came up with a layout block on an in cut with 19 seconds left on the clock. Eli Kerns immediately picked up the disc and launched it to Greg Cohen. Sonny Zaccaro, making up for his earlier mistake, rose up and swatted the disc away, sealing the statement win for San Jose.

In what could be called the first quasi-AUDL affiliated semi-pro women’s game, the Indy Red3 decimated the Nashville Nightshade4 23-4. Red held the Nighshade scoreless in both the second and fourth quarters.

Notably, the teams played with a hybrid AUDL-USAU ruleset using referees but on a 40-yard wide field. You can watch the full game here.

In what will be an ongoing feature here in the Throwaround, we will follow the various signs we see around the league, whether they’re in the stadium or on the field. We continue with the Tampa Bay Cannons’ sideline play-calling signs this week as they took on the Hustle in a losing effort: 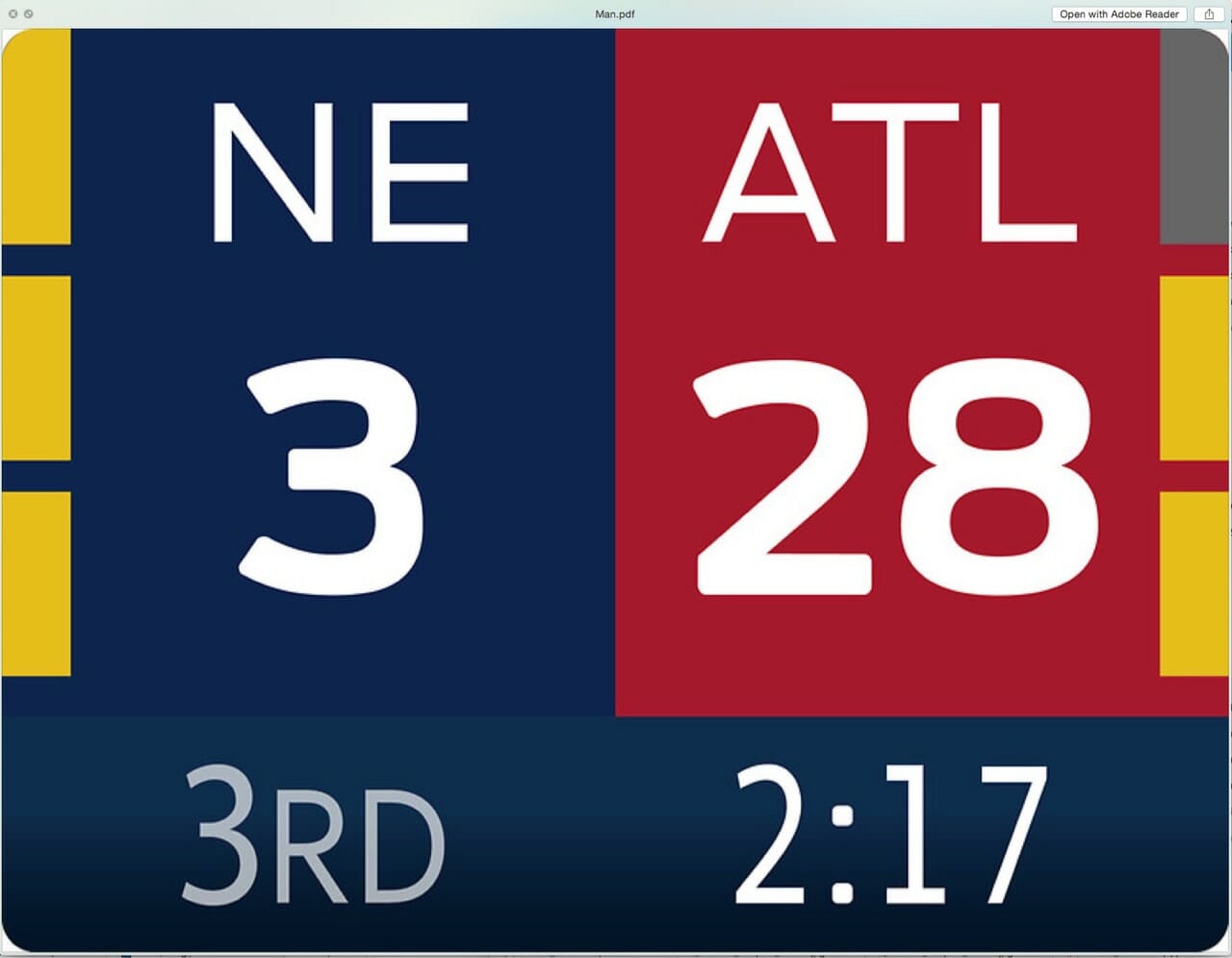 Who can forget?? The Atlanta Falcons had a 28-3 lead over the New England Patriots late in the third quarter of Super Bowl 51. And they blew it. And Cannons’ coach Andrew Roca was wearing a Bill Belichick outfit (above). 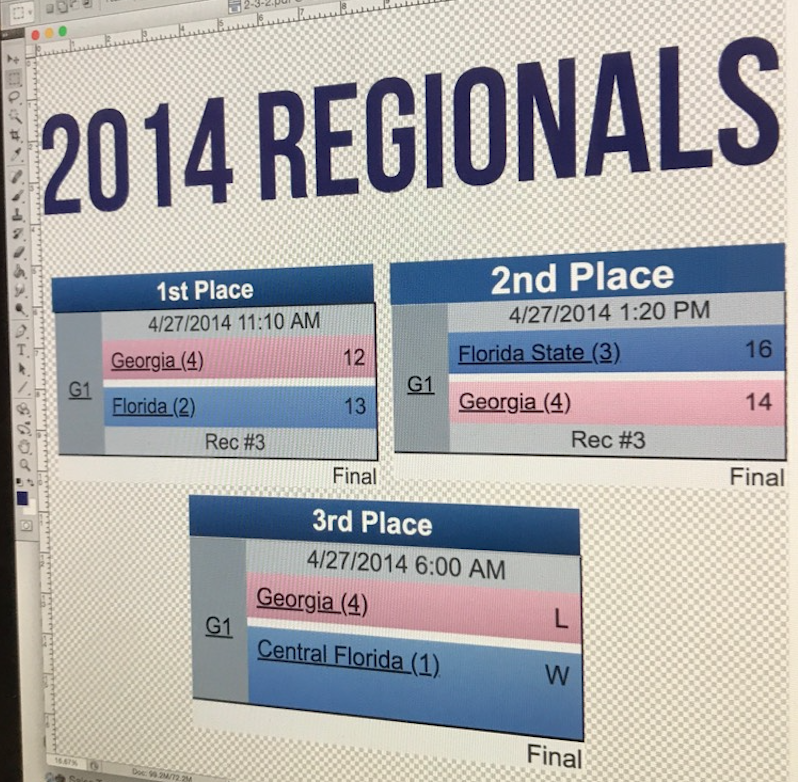 A throwback to 2014 Southeast Men’s Regionals where Georgia lost three straight games-to-go to miss Nationals, with the final loss coming to Central Florida (coached by Roca).