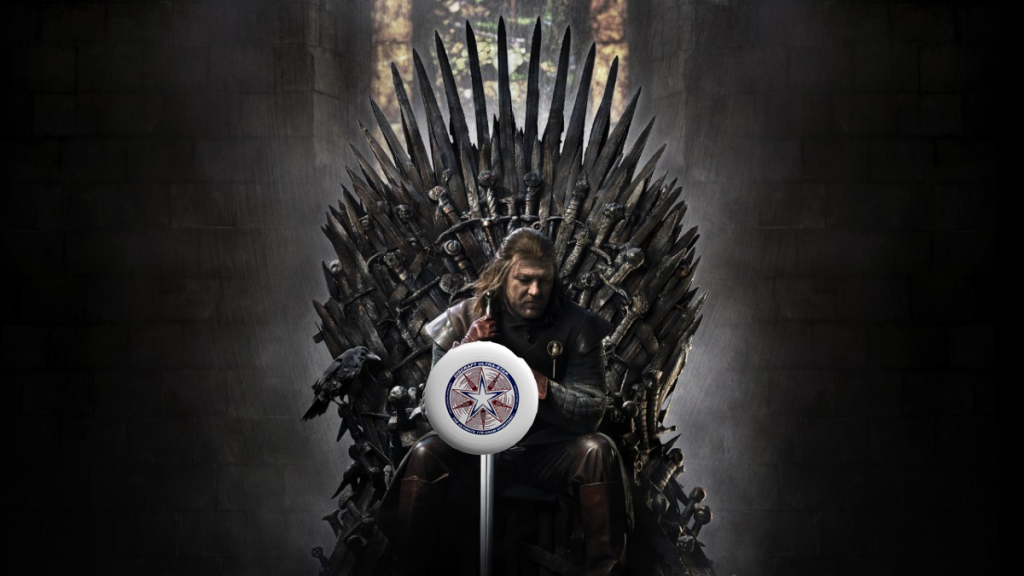 HBO’s Game of Thrones, the biggest show in television, wrapped up with its series finale last night. A group of Boston area ultimate players — Alex Klotz, Eric Dion, Judith Garber, Lee Gutierrez, Evan Rosenberg, and Nicki Haylon — put together this list of GoT characters as the players they would be in ultimate. Enjoy!

Arya Stark scores a callahan against the best team in the league for a huge upset win on universe. At the tournament party, she goes off by herself to practice and no one notices she is gone.

Bran Stark does literally nothing of importance all season, then gets chosen as captain.

Brienne of Tarth is the ridiculously good tall girl who shows up to every single game and scores 3/4 of the points. She’s also the one who takes care of the drunk people at tournaments, and makes sure they get home okay, but then doesn’t get invited to the after-party because everyone forgot.

Bronn is the really good practice player who keeps getting promised a spot on the team but it never actually happens because the team values favoritism over talent.

Catelyn Stark is the “team mom” who is really supportive of everyone but then when one of her teammates gets fouled goes apeshit on the other team.

Cersei Lannister stands on the sideline for most of the tournament telling the really tall guy what to do, and doesn’t play until the fourth game when everyone else is tired. She also doesn’t follow any of the rules but expects everyone else to.

Daario Naharis is the team’s biggest honeypot and always has new haircuts or facial hair so looks different every time you see him. He’s also really good at frisbee and knows it, but still listens to the captain most of the time.

Daenerys Targaryen is that one player who always tries too hard and lays out into people when their team is winning by 7.

Davos Seaworth is the guy who doesn’t really play, but he always shows up to the parties with good beer.

Drogon is the only original member left of the team but then hates all the new people, quits, and moves to the other side of the country.

Eddison Tollett has been on your team for several seasons and had to move away last year for work. Edd also gets injured after he moves because one of his teammates was being an idiot.

Euron Greyjoy is the guy who always throws a hail mary hammer on stall 1 regardless of the situation.

Gendry Baratheon is the guy who has a super bad experience at a tourney, quits the team, takes up rowing, and then comes back three years later, decides to rejoin the team, and is ridiculously good.

Gilly is the girl you got as a pickup one time and then she just kind of stayed on the team.

Grenn is the guy who’s always willing to be in the cup.

GRRM is the league commissioner who decides that the captains should organize the tournament.

Harry Strickland has been on your roster all season, finally shows up to a game, and then needs to leave immediately for a “family emergency.” He also didn’t bring the animal crackers he promised.

Hodor is the clueless tall guy who doesn’t use his height but is loved by all.

Jaaqen Hagar is the guy who is somehow still on a college team after 10 years.

Joffrey loses the game and throws someone else’s disc into the river. He also calls foul every time anyone gets too close to him.

Jon Snow is the newb who doesn’t really know how/where to cut but is really athletic so manages to get open all the time. He also lets the disc fly right past him without touching it because he’s too nice and didn’t want to take someone else’s catch away.

Jorah Mormont is the badass grandmasters player who pulls wins out at the last minute but somehow newbie Jon Snow gets all the credit.

Khal Drogo is the ringer you recruited who gets injured before the first game.

Littlefinger is the guy who comes up with all these elaborate stacks and zones that nobody can figure out and then drops an easy swing pass when they’re finally implemented.

Loras Tyrell has been trained his whole life to become the perfect ultimate player, but deep down he just wants to play Frolf.

Lyanna Mormont is the middle-school player who is somehow more intense than anyone else and always scores the winning point.

Meera Reed is the girl who is always willing to pick up but then gets really mad and leaves because no one ever thanks her.

Missandei is the person who shows up for every hat game during spring hat, but then isn’t allowed to go to the tournament because apparently she “wasn’t rostered.”

Ned Stark is the “rules guy.”

Night King is an AUDL-level player on a team with a bunch of college noobs and has to carry his entire team, then gets injured in the first game of the tournament and no one else can pick up the slack.

Nymeria is the girl you met when you were both little high schoolers and the next time you see her she’s captaining a team at nationals.

Oberyn Martell vastly overestimates his handling abilities, tries to throw a chicken wing into the endzone, and gets it handspiked into his face.

Olenna Tyrell is an older lady who no one has actually ever seen play frisbee but makes recommendations and everyone trusts her opinion. She’s also a huge advocate for gender equity.

Podric Payne is the guy who you see up, wasted, and making friends with everyone at like 4 AM at a tournament, but he’s still the first one at the field the next day and magically not hungover. Also consistently wins Most Improved Player.

Ramsay Bolton just tries to get away with as many fouls as possible. Then when he tries to call a foul, the observer claims they didn’t see anything. Ramsay always brings only a medium grey jersey.

Renly Baratheon never gets to be captain because he’s “not a senior yet,” but wins every single spirit award.

Rhaegal gets injured in a collision with the asshole guy on the other team that everyone hates and is out for the rest of the season, but ultimately it has zero effect on the team.

Rickon Stark is when you’re listing the guys on your tournament roster and you’re like, wait, who is our tenth?

Robb Stark definitely commits to sub on your team next week, then bails at the last minute.

Robert Baratheon just shows up to tournaments to drink and say, “God, I was good last season”.

Samwell Tarly calls injuries midpoint just because he’s tired, but he’s best friends with the captain so no one can say anything about it. He also apparently once pulled off the sickest layout known to man…when no one was watching.

Sansa Stark is the person who just chills in the stack to not cut anyone off, but then gets open deep every time she does cut.

Shae breaks up with the guy she’s dating on the team, hooks up with a guy on another team, and then joins that team.

Shireen Baratheon wants to play ultimate but her asshole dad won’t let her, so she teaches strategy to Davos instead.

Stannis Baratheon is the guy who keeps bringing his creepy, non-frisbee-playing girlfriend to all the games.

The Hound only joined your team so he could beat his old team but has to play them savage.

The Mountain is the person that keeps getting injured and returning to the field only to get skied on universe point.

The Sand Snakes are the players who always shout SEVENS at pickup even though the field is too small.

The White Walkers only poach the lane and then get upset when their mark get hucked to and no one is on them.

Theon Greyjoy is the guy who was a jerk in college and not that good, but went through some stuff and is now super nice, talented, and always volunteers to drive.

Tommen is the guy who got added to the team when his brother got injured and is actually a lot better than his brother, but then also gets injured.

Tormund is the guy who is actually a football player but is really good at frisbee so a lot of people ask him to pick up and sometimes he feels like it. He also always wants to play Never Have I Ever in the hotel room at tournaments and has a ton of dedication to his college team.

Tyrion Lannister is the guy who makes fun of people for suggesting more dump/swings but secretly agrees, but then in the last game of the tournament throws nothing but thumbers.

Varys is the player who is like “Hey guys maybe we should throw more dumps” and then everyone boos.

Viserion says he’s picking up with your team, but when you get there, he’s playing with the other team.

Comments on "Game of Thrones Characters As Ultimate Players"