More ideas about the best way to set up for success when receiving the pull.

Most teams simply don’t think enough about fielding the pull. They practice their red zone sets, reading jump ball hucks, and other things that they may actually have to execute less frequently than how they’ll begin nearly every offensive point they’ll play.

And as the first thing that happens on any offensive point, properly transitioning from receiving the pull to a full offensive possession is a valuable skill. A well-fielded pull improves field position, flow, and sets the tone for your offense. It’s essentially the first blow in the fight of that point; failure to do it well is a landed strike for the opponent. By confidently navigating the first challenge, the offense takes control.

The wonderfully thought Kayla Emrick outlined great tips for fielding the pull in “How Field the Pull & Why It Matters”, and it is great reading. While you should definitely do that, I’ll summarize:

With this as a base, we’re going to go into more detail on: communication, dealing with rough conditions, and the value to be gained.

Communication: Talking Your Way To and Through the Pull

If we accept that it is important to have clear responsibilities about how to field the pull, it’s clear we need to figure out the best way to communicate about said responsibilities. One of the most effective ways to do this is to build language into your team’s communication that quickly indicates who is doing what. If one player is the “center,” another the “right catch,” and a third the “left catch”, all it takes is about ten words to get across who should be doing what.

You can also skip this step by coding it into position on the line. Handlers can stand on the line in their respective order; the handler on the right of a pair is responsible for fielding pulls to the right half. Establishing this rule beforehand helps make sure this happens consistently. In fact, it can be helpful to distribute handlers to opposite ends of your seven on the line, in case the pull is low and direct or a roller, making it more likely someone’s in nearby position to field it. 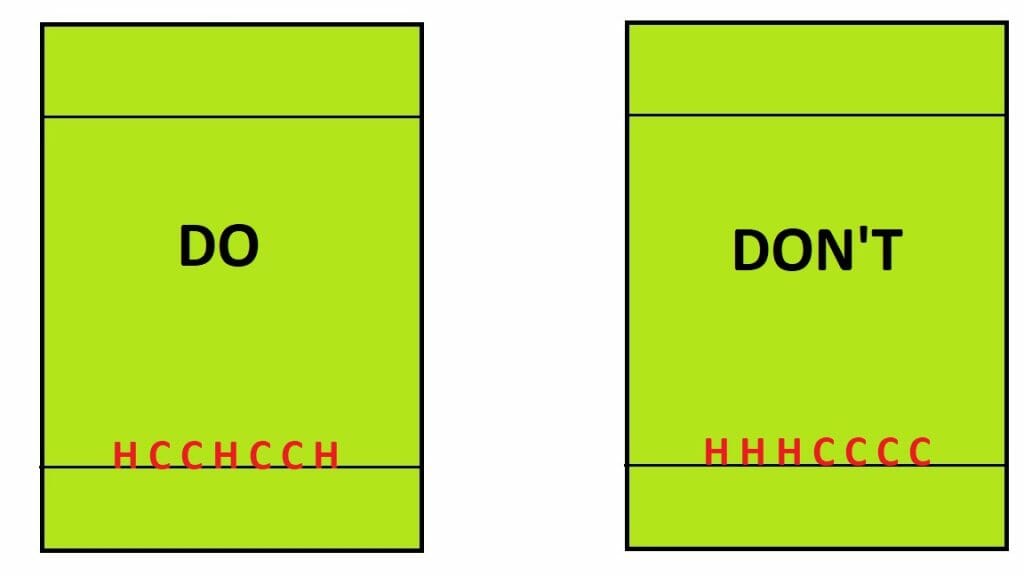 But the conversation doesn’t have to stop when the pull goes up. Simple communication can help smooth out any potential confusion. Many of us are used to saying “I’m giving them a hand” or “Pull is coming,”1 but you can also clarify your intentions among the handler set. An “I’ve got it” or “You’ve got it” can help make sure there aren’t any miscues. Similarly, giving teammates an audible cue or countdown for when you are catching the pull can help improve timing for first cuts.

If you end up as the third handler not catching the pull, talk to your teammates about how fast or where the defense is coming down; letting your fellow handlers know that they have time or that one covering player is charging down fast is valuable information for the pull catcher who is tracking the pull with their eyes as well as the center handler who will often be faced back towards your own team’s end zone waiting to receive.

When You Can’t Catch: Cover Your Lanes and For Your Teammates

Across all levels of ultimate, pulls vary in quality from throw to throw. Sometimes, it’s simply execution by the puller. Other times, its at the behest of the conditions, particularly strong winds. What do you do when it is difficult to catch the pull?

The first tip ties directly back into how you line up on the line: spread out across the line. Holding line by maintaining order does not prevent the seven players you have from spreading out across the width of the field. With a handler in each third, offenses can be prepared to initiate play regardless of which part of the field the pull lands in or rolls to. If your opponent is rolling the disc out of the sideline (intentionally or unintentionally), have cutters by the sidelines who can sprint ahead of the handlers to stop the disc.

What about when the pull is coming in hard and sharp? Sometimes, the risk of trying to make the catch is not worth the reward. But an offense can get most of the benefit if the disc is quickly put into play. The initial pull catcher should plan to backstop the disc. Track its flight, read the landing point, and get just behind that point, so that when it hits the ground, it bounces or rolls right to you. You can even get on one knee to help make sure you don’t get nutmeg’d.

But even beyond that, we can get by with a little help from our friends. In windy conditions, have one of the other handlers line up behind the player receiving the pull. They can help in case of emergency, like the disc popping up over the initial receiver.

The Value of Pull Fielding

Ultimate is a game of dictating. The first point of interaction between the teams on any given point is when the receiving team takes the pull. The offenses ability to dictate the point start there. By fielding the pull successfully, the offense can gain an advantage in tempo and in field position, whether by yardage or gaining strategic high ground. This is the offense’s opportunity to run the play they want from the field position they want — know what you’re trying to do before the pull goes up and be prepared to attack the valuable space by fielding the pull quickly and cleanly.

Allowing a pull to land and roll away from your pull fielder or watching it roll out the side and end up 30 yards away means the defense will likely have time to get down on their assignments and be set up to defend your pull play. Those are big disadvantages to give up just because you weren’t prepared.

Ultimately, fielding the pull is about a lot more than just catching it. It’s not always easy, but it is a valuable skill to cultivate.