The inaugural PUL regular season has come to a close.

June 21, 2019 by Graham Gerhart and Alex Rubin in Coverage, News, Recap with 0 comments 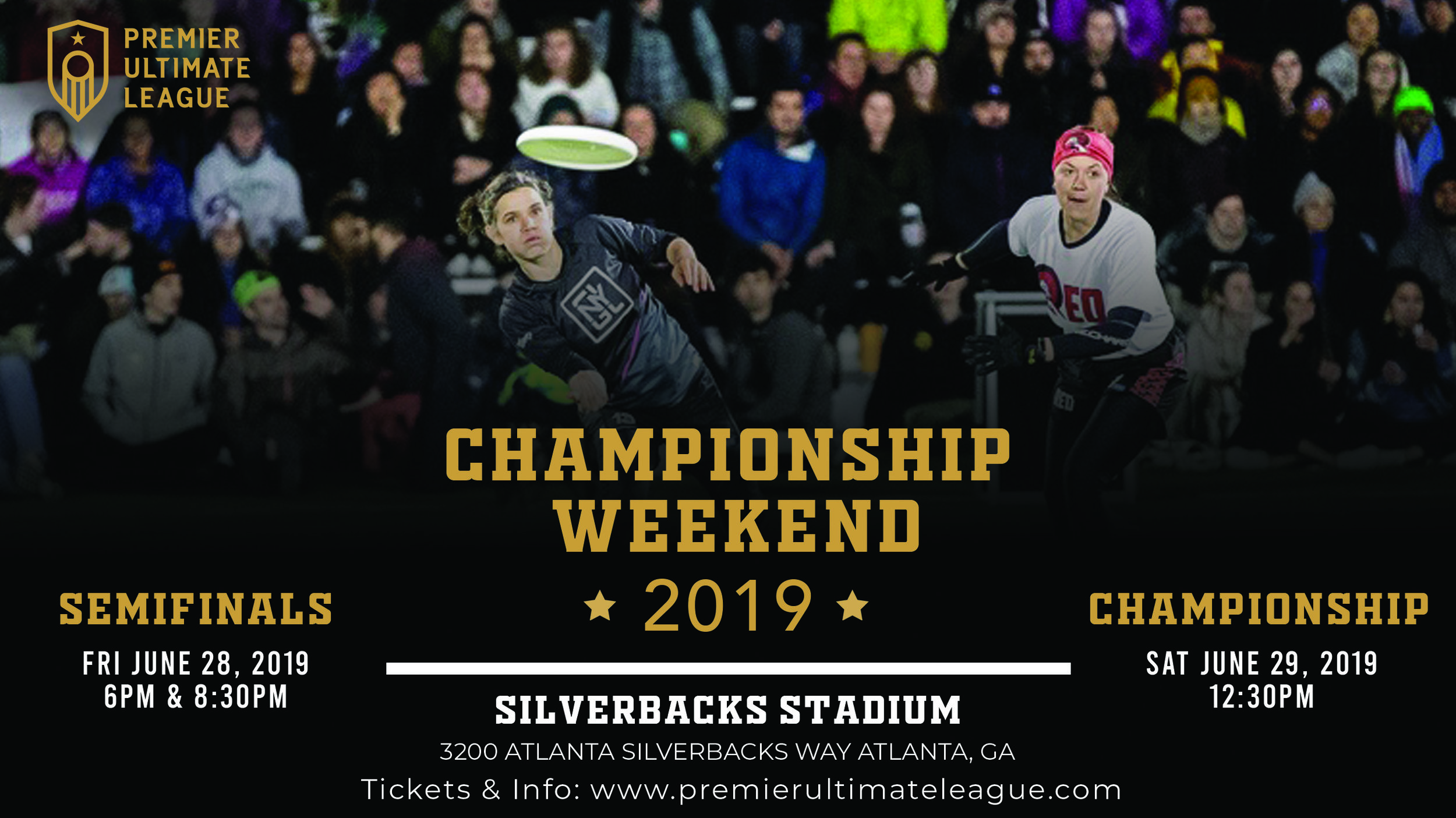 After nine exciting weeks, we’ve reached the end of the regular season in the Premier Ultimate League’s inaugural campaign. Four teams closed out their regular season slate last weekend, with only one advancing to the playoffs. The championship schedule has now been set, so let’s take a look at how the final week got us there.

Even though both teams had all but been eliminated from playoff contention, Columbus Pride and Indianapolis Red fought hard in their conclusive regular season game as a Friday night showcase at the annual Poultry Days tournament. While the game was closely contested the entire way, Pride managed to pull away for a 15-12 win after scoring a third of their points in the fourth quarter alone.

The first half of the game was emblematic of how closely matched the two teams were. Both sides were able to force a few turnovers on defense, but never could turn it into a break thanks to good endzone defense on both sides. Red got the first break of the game to go up 3-2, after a depleted Pride offense threw a simple swing pass right over the intended receiver. It was clear that Columbus was missing their more aggressive playmakers. With Zoe Hecht and Sadie Jezierski at a U24 National Team practice, there wasn’t as much firepower on the field. Sophie Knowles took on a larger role, but without additional handlers, was mostly relegated to the backfield, instead of providing a spark in the short field. Indy seemed to take notice of this change and used their zone to great effect.

Despite allowing the first break, Pride would soon earn one of their own. Emily Barrett, Pride’s most impactful player in the first half, completed the bookends with a handblock on the sideline and a skying catch in the endzone. Columbus then took advantage of the wind to come down in a zone of their own, suffocating Indy’s cutters and forcing a turn at the end of the first quarter. With patient downfield offense, Pride worked it to the end zone and got the disc to Knowles who sailed a scobber over her defender into the safe hands of Iris Javersak.

Red owned the second quarter completely, scoring five of their 12 goals in that quarter alone. After Columbus held initially to take a 6-3 lead, Red’s offensive execution tightened, and their defense surged to match it. Kristin Dudley was particularly impressive, scoring on their first hold and assisting on their first break, as was Austin Pruncha, who had two highlight-worthy blocks in the quarter along with a sliding layout grab to that put Indy up 7-6 — their first lead since 3-2.

The wind truly picked up as the second quarter wore to a close, and it slowed the game considerably. Both teams were still making smart cuts and keeping possession well, but points were few and far between. By the time half rolled around, the teams were still neck and neck, with Indy leading 8-7.

Thanks to the newly turbulent wind, the level of ultimate in the third quarter looked considerably different from the first half. The very first point of the quarter ate up a full six minutes of the clock, denying both teams a chance to flex in the second half. A Pruncha goal finally put a cap on the point itself, but the damage was done to both team’s offensive units, as timeouts and subbing had kept them out on the field for most of that stretch. The quarter ended with the teams tied at 9s, collectively scoring a total of three goals in the frame.

The teams traded quick holds to start the quarter, led by their stars. Prucha nabbed Red’s tenth goal of the game with an impressive athletic layout. Knowles, after a number of unnecessary turnovers in the 3rd, was white-hot in the 4th for Pride’s offense, wrecking Red’s person defense with her high-release throws. Still, it was Indy that broke first, as Emily Nadler managed to sneak an upwind I/O flick to Kristin Baxter in the end zone. This put Indy up 12-11, but would also be the last point the team would score.

With an almost spotless offensive performance, Pride would take the last four points of the game for the victory. Their defensive unit came through with some choice blocks, but it was how well they navigated the wind with the disc in hand that clinched it. Naturally, credit should go to Knowles, who had three assists and a goal in the 4th alone. She took the reins when Columbus needed her to, and it won them the game.

It was a great showing from Pride in the 4th, but not enough to give them any chance at making the PUL tournament at the end of the season. They still ended their season with a win, and finished 6th overall. Red ends their 2019 one win short of Columbus.

Austin Win Over Raleigh Not Enough to Advance

In the final game of the PUL’s inaugural regular season, Austin Torch pulled off a gritty win over Raleigh Radiance. The 12-10 upset was a great finish for Austin, but not enough to rocket them into the playoff bracket. Raleigh played tight despite the wind and Austin’s intense defense, ultimately locking in their spot for Championship Weekend in Atlanta at the end of the month.

Austin set the tone early by breaking on the third point of the game. The wind had battered down a huck from Raleigh’s Rebecca Fagan, and it let Austin’s ever-ready D-line handlers get a chance with the disc. A huck from Dre Esparza opened the field for Austin, and Kayla Ramirez punched it in soon after. From there, the two offenses settled in and began trading blows. Captain Julia Schmaltz came through for Austin and earned them another break to close out the first quarter, and overall was the difference-maker for the Torch early on, either dishing out assists or hockey assists all throughout the first half. Amy Broome also came to play, making big plays to help Torch build and maintain their lead.

Thanks to the wind, the score remained low, and both teams used their timeouts liberally. Raleigh clearly was missing the sure hands of Ashley Powell in the backfield, and couldn’t stretch the field as much as they would have preferred. Anne Worth was also missing, and her sure cuts were notably absent on Raleigh’s offensive unit. Right before half, Raleigh managed to sneak in a goal that kept them in contention. Lindsay Soo, who had been making plays all game for Raleigh, chased down a disc near the sideline and hit Sara Dieter in the endzone. With that goal, Raleigh kept the deficit from looming too large. Being down 8-6 was a much more manageable task for the Radiance than a three goal deficit.

The third quarter played out much like the second. The teams traded points, Schmaltz and Soo continued to lead their teams to holds, and the wind slowed everything to a grinding halt on multiple consecutive points. In a mirroring of the game played by Columbus and Indianapolis earlier in the weekend, there was a full point that lasted for more than half of the quarter.

Raleigh had their chance to break back into the game late in the 4th. A huge blady pass to Georgia Tse flew over all of Torch’s exhausted offense, and brought the Radiance within one, down 11-10. With three minutes to go, Raleigh sent out a kill line to get the stop. They got their chance with an endzone turn on their own goal line, but turfed it at half field with a poor swing. Austin’s offense wouldn’t make another mistake, and Kayla Ramirez snared a disc in the endzone for the goal, ending the game 12-10.

Despite their loss, Raleigh clinched a playoff spot and will enter the PUL finals weekend as the 2nd seed. This was Austin’s last game, but they end the season in fourth placed, only losing out a semis spot because of Atlanta’s locked position at the tournament.

Highlights from the Week

You can buy tickets for championship weekend here.

The inclusion of Atlanta in Championship Weekend at the expense of an Austin team who finished with a better record spawned some arguments on Twitter.

The Stats of the Game Twitter account pulled together some season-long stats for individual players in the league, with the top of the leaderboard (unsurprisingly) dominated by Revolution.

Many PUL players are participating in AFDC’s Color of Ultimate showcase game this weekend.

The Atlanta Soul’s Anraya Palmer was interviewed this week by Upwind Ultimate about both her experience in the PUL and the Color of Ultimate showcase.

It is still Pride Month and many teams and the league itself are selling Pride gear.

“I’m happy that the league was willing to be flexible in terms of rules this year, but I think we can do even better. When we decided to use the WFDF receiving fouls, everyone was on board. But in practice, it’s been hard to implement. I even hear commentators making comments about fouls that are in line with the USAU rule. I’m optimistic this will get better, but it’s a learning process.” – New York Gridlock’s leadership on the major takeaways from the first PUL season

Despite Austin’s surprise upset of Raleigh, our rankings are unchanged this week and ultimately our top four teams are the ones who qualified for Championship weekend.