February 16, 2020 by Daniel Prentice and Patrick Stegemoeller in Coverage, News, Recap with 0 comments

TAMPA — Just four teams remain in the hunt for a Warm Up title — Carleton, Michigan, Texas, and Georgia Tech. With Brown taking a surprise loss at the hands of Michigan, UMass missing the bracket by the smallest of margins, and tough match play schedules leaving some good teams out of the championship race, Saturday evening’s quarterfinals were a strange affair.

Here’s a look at the action from the day. 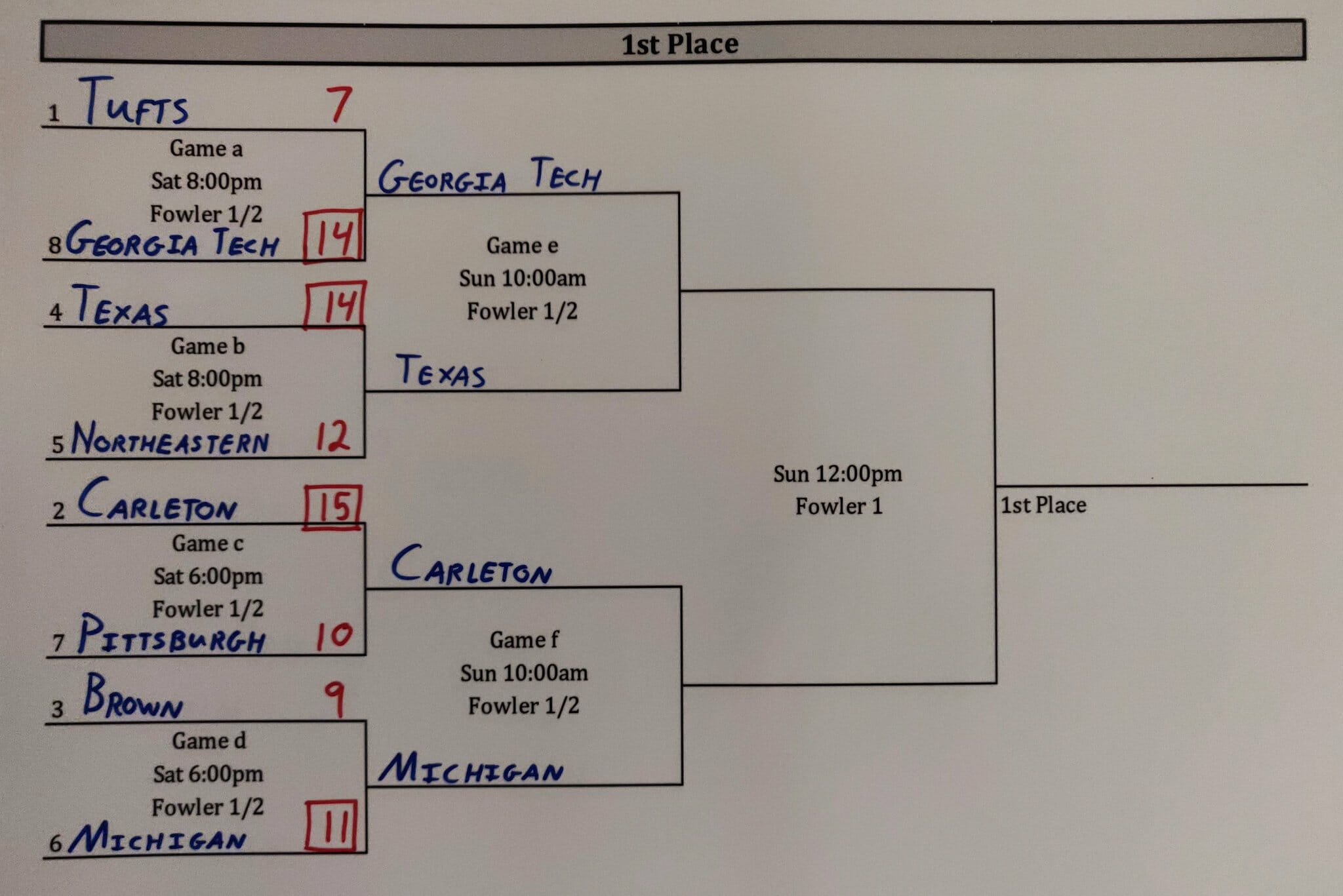 Any hope Pittsburgh had of repeating their 2018 semifinal upset over Carleton was dashed early, as CUT ran out to an early lead and never let Pitt back in. Seemingly every major play went Carleton’s way, with Stanley Birdsong, Luke Webb, and Joe White all taking turns to posterize their defenders in the deep space. The one notable exception was an outrageous trailing edge layout grab from Michael Ing, putting Pittsburgh on the board for the first time trailing 3-1.

Carleton’s O-line dictated the terms of engagement all game and swiftly moved the disc against person or zone. There were points this weekend when the focus seemed to slip for Carleton, but CUT was dialed in and putting on a show Saturday night. Surrendering only a single break all game, Carleton played with a tempo and precision that overpowered what had looked like the best defense at the tournament. They took half 8-6, quickly extended the lead with two breaks out of halftime, and kept pumping in holds to win 15-10.

Pittsburgh disappointed on both sides of the disc, with their offense struggling to find rhythm and the defense failing to dictate the shape of play. There were stretches where the handler core was able to string some nice sequences of movement together, and burly cutter Will Helinski gobbled up goals with his physicality in the endzone, but by and large, the disc was not moving fluidly between the various levels of the offense.

Michigan pulled off the upset of the weekend by knocking off Brown 11-9. Michigan didn’t announce themselves as an upset candidate right away, but they did hang around with Brown through the game’s first act. Brown claimed a pair of breaks in the first eight points, but Michigan proved — with their willingness to grind and solid play in the backfield — that they weren’t just going to roll over for the favorites. Led by strong performances from players like Jordan Schwallie, Adam Stautberg, and Raymond Lu, Michigan played with no fear of Brown.

The game’s second phase started after Brown wasted a couple of chances to break while up 6-4. A third break likely would have ended Michigan’s hopes of hanging around, but the bout of sloppiness from Brown triggered a full on slide. Michigan broke on the ensuing point to make it 6-6 and then Brown freshman Leo Gordon dropped a wide open huck in the endzone to set up another Michigan break for a 7-6 lead. The teams traded holds into half, meaning the game was only on serve, but the three point stretch sapped an already tired Brown of emotional energy and instilled Michigan with more belief than they would need.

When Michigan broke on the first point of the second half, the upset bid became real. They had several chances to break again on the following point but couldn’t convert. Brown did then get the break back for 9-9, but it was clear after the exhaustive hold for 9-8 that back to back double game point wins to end match play left the team physically, emotionally, and mentally spent.

Michigan held and then broke to close it out for the 11-9 final score and emphatically prove themselves worthy of their place in the bracket.

Georgia Tech Gets Revenge on Tufts

Tufts was up 7-1 at half on Georgia Tech when they met in match play on Friday morning. Since that point, Tech has outscored Tufts 22-10 as they fought their way to a definitive 14-7 win on Saturday night. After a few swapped holds, it was a one way street of breaks, with Georgia Tech scoring on a bungled fast break attempt from Tufts to make it 4-3 and again at 6-4 after a spectacular layout block from Mark Farid. The offense was humming for Tech thanks to Will Lindquist’s extensive vision and range, going break free in the first half.

Tufts entered the game with limited numbers and their rotation got smaller as injuries continued to take their toll. Jac Carriero limped off with an aggravated hamstring as Tufts was broken to make the score 10-6, and the game never got closer than three points from that point on. With only 13 healthy bodies by the end, Tufts didn’t have the legs or the energy to climb out of the hole Georgia Tech had put them in.

In soft cap, Chris Zuo peeled off the stack for a poach block and then tossed the winning assist to close out the game 14-7 and send Georgia Tech to the semifinals.

Early miscues from Northeastern were ruthlessly punished by Texas’ D-line and ultimately ended up being the difference in Texas’ 14-12 win. A dropped pull at 2-1 led to a quick Texas break, and then a short field turn on the next point made it 4-1 almost as quickly. Another break right into half gave Texas a comfortable 8-4 lead.

Both teams traded holds through the opening stages of the second half, with Northeastern offering little resistance to the Texas O-line. Vinay Valsaraj and Sebby Lauzy were effective downfield while freshman John Clyde helped anchor the backfield. Northeastern’s offense was solid, too, apart from the first half miscues. Their steady holds kept them from getting completely blown out of the game while the defense tried to find its footing.

The Texas offense finally wavered at 10-7 when they committed a trio of turns, but they weren’t broken until the score was 13-10. Northeastern did make a late push as Texas’ offense slipped from cruise control into carelessness and got back-to-back breaks to pull within one at 13-12. But Texas ended the slight scare with a clean hold on the final point of the game to advance to semifinals.