Ultiworld’s 2019 Throw of the Year, Presented by Friction Gloves

Time to crown the Throw of the Year with your votes!

Check out all of the nominees and vote below, then check back to see which clips advance for another opportunity to participate. The first round of voting starts now and closes on Thursday, March 26 at 4 PM ET. 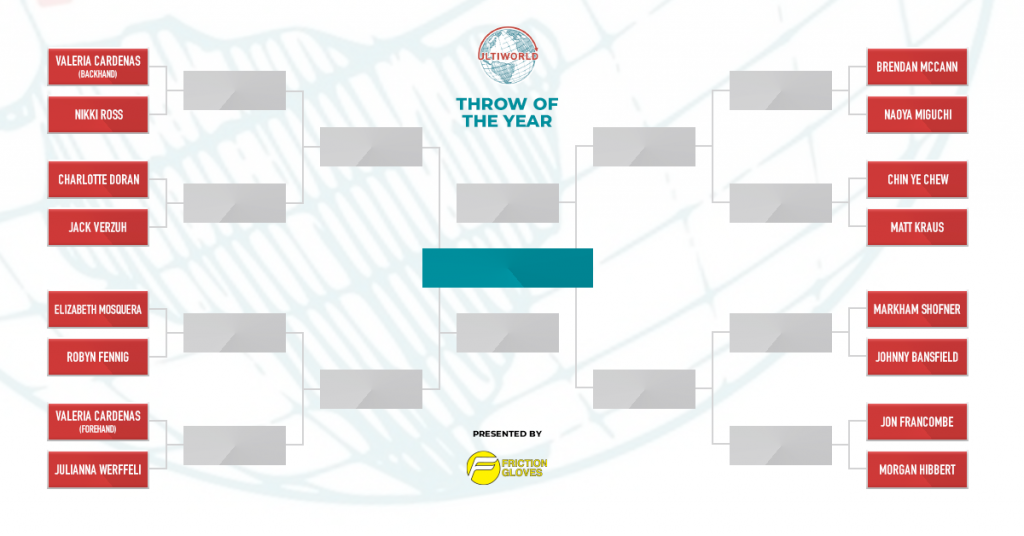 Young in age but vast in experience, Valeria Cardenas showed off her talents for the Colombian U24 team against the vaunted Americans. This cross-field backhand dropped in for her receiver before the back line closed things down or a pair of defenders could have any say in the result. The throw wowed the online audience and could do it again to win this bracket.

A coach might tell you to avoid throwing the same throw you just pump-faked, but Nikki Ross sees the field with an advanced eye. Known for her powerful backhand, the Boston Siege handler gave it just the right IO to dive into the waiting hands of a receiver. Ross tied the club women’s division for the lead in assists in 2019 thanks to dots like this one.

Dodging the Defense: Doran vs. Verzuh

As if they were laser-guided to the target.

As crazy as it is, Siege lands another a throw on the list from the same game. That has to be a first. This time, it’s Charlotte Doran representing Boston. Most scoobers are lifted over the defense, but this one is ripped across the field with enough power to evade the downfield player in the zone and give the receiver plenty of space for the continue. It’s a perfect example of when the throw before the assist is the real hero.

Verzuh’s reputation grew in their final college season, as they became one of the most feared throwers in the division following years as its most dominating receiver. This throw is impressive on its face, but most throwers were being brought to their knees by the Texas winds at the College Championships. Verzuh remained resolute, piloting this throw like a drone with a perfect pop over the defender and soft drop into their receiver’s waiting grasp.

Technicians With Power: Mosquera vs. Fennig

There’s one throw the defense gets: the pull. But it is still a throw, and nobody throws them better right now than Elizabeth Mosquera. The Colombian star is an artist as a puller, and this one should be enshrined. And it came at one of the most important moments in the entire Premier Ultimate League season: in a taut fourth quarter of the playoff semifinals. It isn’t coincidence that the set defense quickly generates a turn.

The 2019 Club Women’s Player of the Year made quite an impact for her new club, including this throw from Scandal’s U.S. Open upset over San Francisco Fury. Fennig bombed a backhand to fellow Heist transfer Austin Prucha from near the short brick mark to just inside the back line of the end zone. That’s a small space, very far away, to hit, especially with a defender chasing.

Opening The Field: Cardenas vs. Werffeli

Forehands with power and finesse to stretch the defense.

Most of us can’t throw a huck through elite club defensive traffic. Most of us can’t perfectly hit a defender in the same third. Valeria Cardenas can do both, after a hard pivot to move the mark. With her second entry in the bracket, Cardenas muscles a forehand straight up the line, slicing past the defense while staying catchable and in-bounds.

Werffeli’s 56-yard forehand huck to space demonstrated her standstill throwing power, going high enough to be hard to defend while remaining easy to play offense with. And it came on double game point in the National semifinal against a powerful Fury team that Brute Squad has become very familiar with. To shove aside such immense pressure to make such a difficult and pivotal throw is impressive for anyone, let alone a thrower who is barely out of college.

To The End Zone With Style: McCann vs. Miguchi

The game might not reward style points, but we do.

Is it tremendous vision or adrenaline-seeking that leads a thrower to see a cutter peel off of the back of the stack deep and snap off a scoober? The answer may be both, or maybe it’s a secret only Brendan McCann knows. From well behind the midfield line to halfway deep into the end zone, upside down — clearly, McCann sees the code.

With a key game at the world championships on the line, Naoya Miguchi lofted this beautifully weighted forehand across the field for the game-winning goal to push Japan past Singapore in the mixed division. There’s no hesitation for Miguchi, who sees this developing as soon as he spies his target shift at the back of the stack. That’s how you end a game.

The Beauty of Throws to Space: Chew vs. Kraus

The nirvana of a sailing disc and a streaking receiver intersecting perfectly.

The Singaporean U24 Mixed team was one of the best stories of this past season, a surprise outfit that reached all the way into the semifinals, playing an exciting brand of ultimate. Their Catch of the Year nominee reached the final, and Chin Ye Chew contributed this Throw of the Year nominee to the cause. Say what you will of throwing to a receiver in the same third; this thrower simply guides his teammates to a better space.

Kraus begins this nominee with a block, settling on the front of the end zone line with an eye on the opposite end. I doubt even his receiver expected him to deliver a massive forehand from one end of the field to the other for a ‘golden gun’ one-throw score. Talk about making your opponent pay for their red zone mistakes!

What Wind?: Shofner vs. Bansfield

While mortals cower in fear, they bend the wind to their will.

Markhan Shofner’s reputation as a gunner is apt, given his penchant for high-value and spectacular throws like this one. This was just one of three potential nominated entries from Shofner that got serious consideration for the bracket. But above the others, this wind-riding OI forehand behaves as if the thrower is mystically attuned with the forces of nature around us.

While his opponent understands the forces of nature, Johnny Bansfield might just be one. The explosive defender couldn’t advance deep into our Block of the Year bracket, but he might be an even better power thrower. This 60-yard projectile in the semifinals of Nationals might have melted the plastic, blasting upwind as if the shifting air was akin to what you’d find inside a gymnasium.

Flare Over Fundamentals: Francombe vs. Hibbert

Get fancy with your bad self!

This one tests our definitions of a throw, our creativity as offensive players, and our limitations as humans. At the British Indoor social tournament, Disco Inferno, Jon Francombe turned a rather silly drop into an anomalous assist by booting the disc the rest of the way. Whether by accident, desperation, genius, or all of the above, this one is so unique that we had to include it.

Here we go again. It escaped us until we finalized everything that the venerable Morgan Hibbert landed plays in the Block of the Year, Catch of the Year, and now Throw of the Year bracket. Someone get this man a trophy! While his plays haven’t had a ton of good fortune among the elite, perhaps this splashy no-pivot around air-bounce backhand assist from a matchup against rival GOAT will get the job done.

Comments on "Ultiworld’s 2019 Throw of the Year, Presented by Friction Gloves"