Ultiworld’s 2019 Throw of the Year: Quarterfinals, Presented by Friction Gloves

Check out all of the nominees and vote below, then check back to see which clips advance for another opportunity to participate. The second round of voting starts now and closes on Wednesday, April 1 at 12 PM ET. 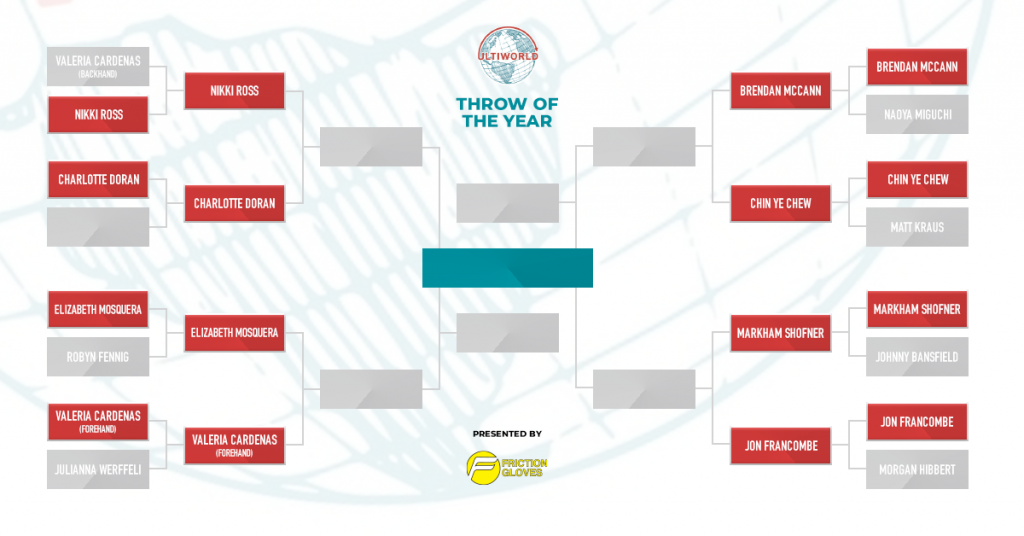 We have two teammates tangling in both of our women’s matchups, including first-time Nationals qualifiers, Boston Siege. Ross was in a close contest, taking about 55% of the vote over Valeria Cardenas. One member of Siege will move on to the semifinals! How will the vote be split?

Our second comrade competition is between frequent Colombian teammates, Elizabeth Mosquera and Valeria Cardenas. While these plays come from different teams, these two are extremely familiar with one another from their years on Revolution. Mosquera scored round one’s narrowest win on the women’s side, with about 54% of the votes over Robyn Fennig; Cardenas earned 60% of the votes against Julianna Werffeli. Can the world-class pull outperform the sharp forehand huck?

Both of these throws came during championship competition, a pressure-cooker environment against elite opposition. For McCann, he was the leader of Michigan Tech at the D-III College Championships. Chew was representing his country on the international stage during his team’s breakout performance. Chew’s over 71% of votes earned in his round one matchup led the entire bracket, so McCann has his work cut out for him.

Perhaps you’ve heard the idea that nearly every offense has someone who has license to break the structural rules that allow the offense to operate. Markham Shofner is at his best operating with the freedom to take a challenge like riding the wind with a deep OI forehand. As for Francombe’s rule-breaking: is there really much more to say about it?

Comments on "Ultiworld’s 2019 Throw of the Year: Quarterfinals, Presented by Friction Gloves"