From one disc to many. 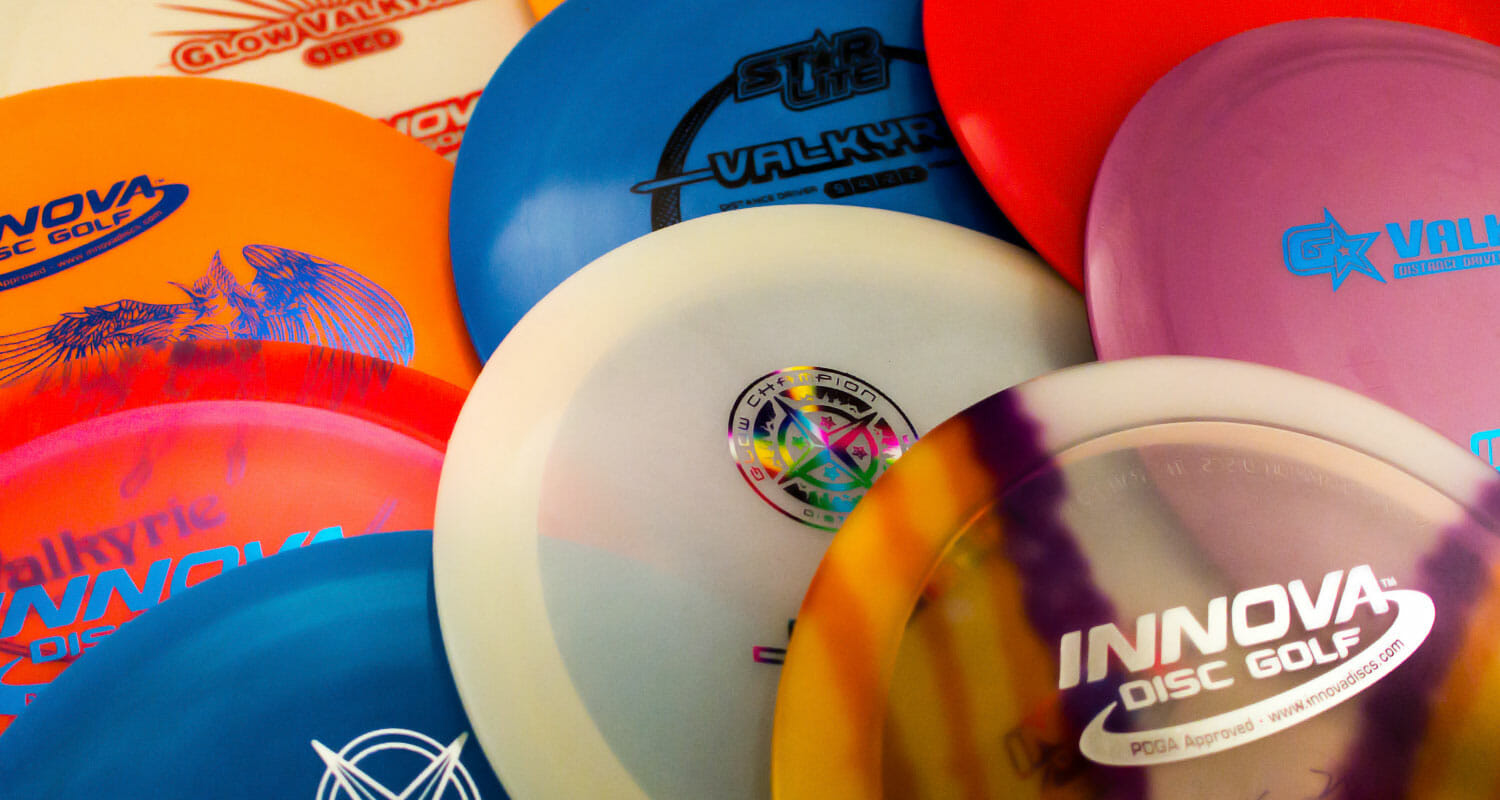 This is the sixth and final part in our series on learning to play disc golf as an ultimate player. The series is presented by Innova Discs, the Choice of Champions!

One of the things I’ve always found most exciting about picking up a new hobby is learning the vernacular. I have a fond memory of being at practice at ARHS in my second year of playing ultimate. Tiina, our coach, was talking about zone offense and said something to the extent of, “If the stall gets high and no one is open, don’t turn it over throwing backwards. Jack it down field instead.” But my mind had no context for “jack it,” so instead I heard “jacket” and was left completely confused. When I asked what a “jacket” play was, she and a few of my teammates looked at me like they couldn’t tell if I was joking and eventually said something like:

“Throw it as far down the field as you can.”

Finally, a satisfied nod of understanding. Thus, language is acquired.

Allow me to save you some time with both the language and the learning curve of rule number one, “to throw it is to know it.” Let me preface our linguistic exploration by saying this: in ultimate, you only throw one disc, so the concept of “flight characteristics” is a little foreign. If a right-handed backhand player (RHBH) throws it “outside-in,” it will fly out to the left while tipped back to the right and slowly slide back along that angle. To succeed in ultimate, a player needs to develop different angles and release points to achieve trajectories suitable for all of the situations that can arise on a field.

In disc golf, the objective is almost diametrically opposite: a disc golfer wants to find consistency in form while choosing the right disc for the occasion; the disc is the variable, the thrower the constant. Here is the sixth Tuesday Tip for ultimate players picking up disc golf: Let the disc do the work. I’m going to refer to a RHBH for all examples while I try to explain myself.

Since we only throw one kind of disc in ultimate (a Discraft Ultrastar; remember that I am old and miss me with your Pulsar comments), the only way to measure stability is to consider a fresh disc against a worn in one. It’s possible that you’ve noticed that a worn disc will flip over easier than a new disc.

For example, you can throw an inside-out (IO) forehand with a fresh disc with some confidence that it will hold that delicious IO angle and finish by falling to the right. With a worn disc, the same amount of power might flip it over, sending the disc diving off to the left and your coach into conniptions. This is because a new disc is more stable; it holds its trajectory longer as power is increased. As a disc is worn in, it becomes understable relative to its earlier condition, which accounts for the unintended flip.

You can also “turn over” a disc by putting too much power and not enough angle, as shown here when I almost blew a chance to win the Boston Invitational on the most ill-advised throw in ultimate. Six-Seven Kevin made an athletic play to track it down, but that throw was supposed to arch out to my left and then sail back towards the center of the field for him to run onto. If you pause it, you can see that I released it IO, but with too much power; the angle wasn’t steep enough to compensate for the understable flip of the disc, or “turn” as it is called on the Innova Flight Ratings. If you pause it a few seconds later, you can see me, then a 28-year old, realize that if Kevin can’t get there I will once again be benched by my high school coach.

As we move into disc golf, in order to refer to different discs, I’ll use the term “mold.” For instance, the Ultrastar and the Pulsar are different molds. The Pulsar is a more stable mold than the Ultrastar, making the Ultrastar relatively understable. There is lots of science and physics that determine how the mold dictates stability, but I’ll leave that to someone else to explain. For our purposes, just know that you can put more power into a Pulsar before the disc will flip over, as in the IO forehand example.

Golf disc molds allow access to the other side of the spectrum as well: overstability. Something that is overstable will not flip over, so you can really haul off on it, even into a headwind, and still expect it to finish its natural flight trajectory.

And that brings us back to the idea of letting the disc do the work. You are a craftsman out there on the links; pick the right tool for the job. If a fairway bends to the right, don’t try to jack up a monster outside-in to “force” the disc over towards the basket. Instead, reach for something understable, throw it nice and flat like you learned to do in the field, and let the properties of the disc turn it over and steer it towards the pin. This is really as good as it gets in terms of performance and aesthetic. If you’re facing a stiff headwind (which will make the disc “feel” like it’s traveling faster than it is and make it “want” to flip), don’t throw an understable disc on a wicked IO line and expect it to navigate. Again, stick to that consistent, flat release you developed in the field and throw an overstable disc that will hold straight and finish left. This is what I mean by letting the disc do the work.

In translatable terms, hyzer refers to an inside-out angle while anhyzer refers to an outside-in angle. However, golf discs fly differently than Ultrastars and Pulsars, so a little something is lost in translation. To elaborate: OI and IO refer to the flight path of the disc from the throwers perspective, from the in-side of your stance to the out-side, and vice versa. Meanwhile an/hyzer refers specifically to the angle of release and angle of the disc in the air. In golf, the flight path is referred to as the “line.” So when someone tells you they “liked that line,” they’re saying the liked the combination of disc selection and release angle that produced the resultant trajectory.

To that end, sometimes you will want to throw an overstable disc on an anhyzer (“anny”) to trace a fairway that forces you initially to the right, but left to finish. Sometimes you will want to throw an understable disc on a hyzer for a “flip shot,” which is how you achieve maximum distance relative to power. At some point you’re going to return to throwing an Ultrastar and realize how much hyzer you’ve been putting on it all these years you thought you were throwing it flat. It is a weird sensation.

Anyway, you’ll figure out the right angle + disc + power combinations faster when you play the same course consistently. Once you’ve established a precedent for what you can make your discs do, it’s just a matter of imagination and execution to take on new holes. Over time you’ll “season” your discs through wear and tear and they will lose stability, opening up entirely new lines for old faithful discs. The first Mako3 I ever bought still has a place in my bag because it is now a beautiful “turnover” disc having lost most of its stability.

Below, you will find a few disc suggestions for those of you looking to expand their selection and experiment with stability and an/hyzer release. I’m listing throwing putters, mid-ranges, and fairway drivers because, as a new player, you probably aren’t throwing hard enough yet to perceive meaningful differences in the stability of high speed discs. Again, I’m going to recommend Innova discs because they are what I am most familiar with, but you can easily use the Marshall Street Flight Guide to find comparable molds from other brands.

Hyzer Flip: A disc thrown hard on a hyzer angle that “flips” up to fly flat, or even “flips over” to fly anhyzer.

Flex Shot: When an overstable disc is “forced” to fly anhyzer from release before stabilizing and fading into a hyzer. This is a useful shot when used intentionally, but a limiting bad habit when adopted early to gain distance.

Brace: The power transferred into the right leg during a RHBH. When the shoulders and hips pivot over the brace, power is increased.

Premium Plastic: A brand’s most durable plastics, usually stiffer and glossy or translucent in appearance. Generally, these are the more stable than the same mold in a baseline plastic. More expensive.

Baseline Plastic: A brand’s least durable plastics, usually softer and matte or chalky in appearance. Generally these are more understable than the same mold in a premium plastic. Typically preferred in putters. Less expensive.

Spike, or Spike Hyzer: The disc golf version of a “blade,” or a disc thrown so inside-out/hyzer that it dives almost straight into the ground.

Comments on "From Ultimate to Disc Golf: Flying Saucers [Pt. 6]"