Carleton and UNC are the final two, but only one can be champion.

Previously, we shared the top five finishers in both the D-I men’s and D-I women’s divisions from each regional championship, along with a narrative story of how things might have played out, and every game from every regional championship. We followed up with the pool play games of the D-I College Championships and the prequarter, quarterfinal, and semifinal rounds.

Only two remain and only one can be champion. Wire-to-wire #1 and #2, Carleton and North Carolina, get a chance to settle the score. 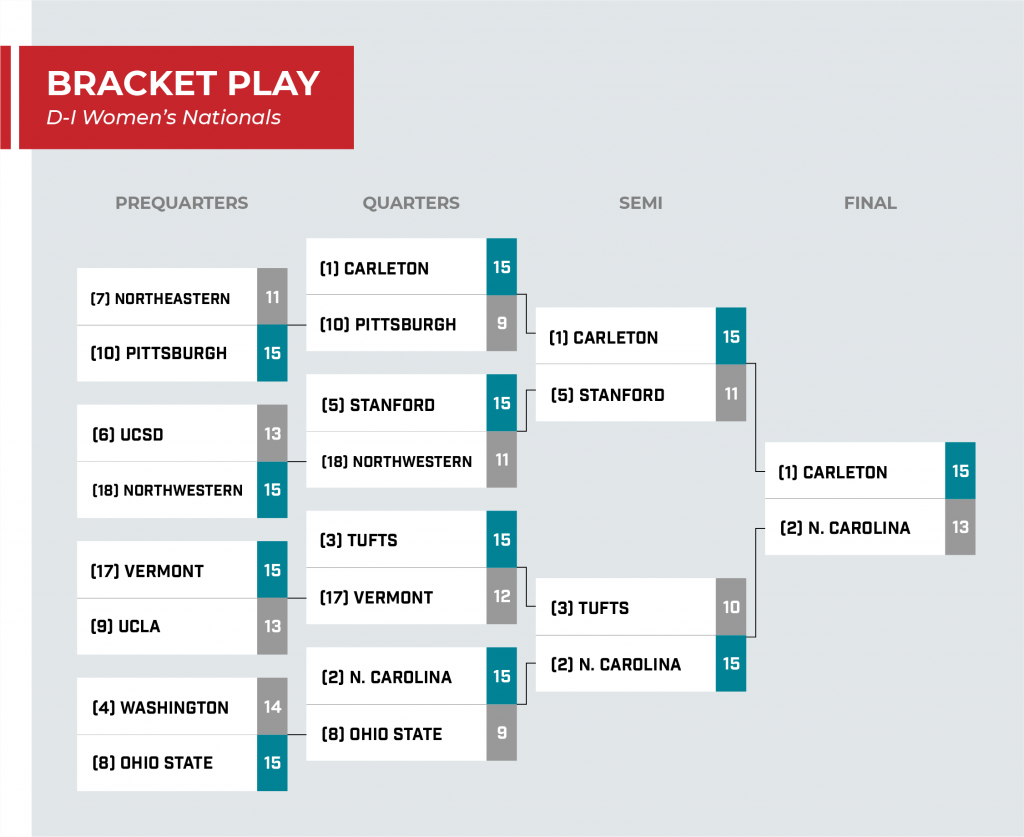 Carleton Syzygy edged North Carolina Pleaides 15-13 in an exceptional matchup between two talented teams that had been brewing all season. After spending the whole year at the top of the standings, after a preseason of speculation about the two clubs, after pontificating and predicting, the final product was a showcase of the women’s division’s finest programs. It was close throughout and easily could have gone the other way, but it was Carleton’s superior ability to execute that gave them the narrow advantage on the field and on the scoreboard.

The first portion of the game, while as close as the rest would be, belonged to North Carolina on the scoreboard. They coaxed a turn to open the game on an upline miscue between Isabel Arevalo and Kate Lanier, but failed to convert. The D-line did not make the same mistake on their next opportunity, after Sydney Rehder deflected a reset from Lanier to Karen Ehrhardt; Rehder and Connie Cui confidently maneuvered the offense into scoring position, with Cui hitting Olivia Monroe on the break side for the game’s first break, giving UNC a 2-1 lead.

Both offenses stepped it up and delivered a run of ultimate that will surely be subject to advanced analysis as an example of what the game can look like. The back-and-forth of the contest can be attributed more to defensive pressure and the high stakes than any poor offensive play — the teams compiled 21 holds, more than we saw in either women’s semifinal. Carleton hit three straight, with fluid and disciplined possessions, two of which ended with Ehrhardt connections as Karen delivered the disc to Alyssa in the end zone. For UNC, Anne Worth countered with two of her game-high five goals, including on a gorgeous deep shot from Tyler Smith.

With the scoreboard reading 4-4, Syzygy disrupted their opponent’s rhythm with a zone, one of the only times we saw either team deploy such a strategy in the comfortable conditions. But it was enough to create some discomfort, and Maya Powell was able to push away an ambitious Smith huck to Florence Brooks. Powell soon found room to connect deep with Nariah Sims, who reset back to Lauren Carothers-Liske for a give-and-go break score to make the score 5-4, Carleton.

North Carolina looked comfortable attacking the deep space, despite just moderate success: North Carolina completed 40% of their 10 hucks, compared to Carleton’s two turners on six deep looks. However, UNC’s ability to threaten to attack away helped create the big spaces they preferred to operate in. In contrast, Syzygy demonstrated they could maintain possession, attempting 33 more passes than Pleiades, but still managing a higher completion percentage (95 to 94).

For the time being, the long ball paid off — on offense and defense — for UNC as they retook the lead. Smith smoked one to Ella Juengst for a timely hold. On the other hand, Arevalo overshot a put of her own, allowing UNC to strike back, with Theresa Yu finding Dawn Culton in space to set up the Pleiades break that gave them the 6-5 advantage. They nearly forced another huck turn on the next point, but a spacious shot from Lanier was hauled in by a bidding Carly Campana with one of the game’s most spectacular goals.

But it giveth and it taketh away. After a Carleton break courtesy of a Sims block and a Carolina hold brought the count to 7-7, Pleaides had a chance to claim the first half after a red zone error from Syzygy. Worth tried to squeeze a huck into Juengst, but ran out of real estate, crossing the back boundary. The no. 1 seed did not seemed fazed as they marched the other way for the hold to take half, finishing off the possession with a break swing from Lanier to the elder Ehrhardt, who continued to Anika Thomas-Toth for the 8-7 Carleton lead.

In the second half, Syzygy displayed the depth of skill that has defined their team, with seven different players throwing assists and six different players catching goals. Over the course of the game, seven different Carleton players eclipsed 100 total yards; UNC’s offense was more concentrated, with Worth, Smith, Juengst, and Bridget Mizener each amassing over 200 yards, but no other player getting into triple digits.

Yet one of UNC’s biggest plays didn’t involve any yards gained for Julia Zwierzynski. After a Carleton turn and missed Carolina huck put the Syzygy offense in their own end zone, Pleiades locked up the downfield options and kept the the Minnesotans pinned. A rushed swing from Anna Stubbs was scooped up Zwierzynski for a Callahan that jolted the crowd and earned her team a 9-8 lead.

The offenses fed off of the energy. In a similar five-hold run to the one in the first half, Carleton’s offense scored on three of their next four possessions, with North Carolina scoring twice with an equal number of turns. But the defenses didn’t back down from the challenge. UNC had a particularly strong goal line stand, preventing Carleton from reaching the end zone as they moved sideline to sideline over and over. The offense held up under the pressure, with Emma Gautier finding Alyssa Ehrhardt near the front cone for her team-high third goal to tie the game at 11-11.

Perhaps the biggest difference-maker was how efficient Carleton’s D-line was once they got the disc. After an Ada Wright block, Sims, Carothers-Liske, and Powell led a lovely Carleton series that concluded with an Emma Chin goal for a break to retake the lead, 12-11. The Syzygy D-line converted on four of five opportunities in the game. Meanwhile, North Carolina’s defense failed to convert either of their two clutch opportunities in the game’s final four points. They found themselves in the unenviable position of needing a break after the UNC offense tied the game at 13-13. But Cui could not connect with Zwierzynski on an under on the defense’s final break opportunity, giving the Carleton offense a short field that was immediately traversed by a single throw from Lanier to Carly Campana.

North Carolina’s offense looked well on their way to forcing double game point. They hit the open side for consecutive gainers before pushing a reset back to Smith, who dutifully pivoted to swing the disc across the field to Mizener. But Sims, living up to her Defensive Player of the Year reputation, bid to tip the disc, giving it just enough wobble to escape Mizener’s grasp despite reaching its target. After Carleton advanced past midfield, Lanier found Karen Ehrhardt, who turned and snapped off a swift forehand to an open Carothers-Liske to clinch a championship for Carleton.

From beginning to end, Carleton was considered the division’s top team. They are truly a complete outfit, with depth, skill, and athleticism to beat any given opponent on any axis. UNC was nearly their equal, and both programs have been steadily moving towards a title. After years high expectations and elite recruits, it was Carleton who got their first. But given the young talent on both rosters, and their potential to soak up more elite recruits, it might be the last we see of this pairing in what could soon become a race to build a dynasty.