Switzerland Returns to the Fields

This past weekend, local club Freesped held the Swiss Ultimate Summer Kick-Off in Basel. Saturday was a one day tournament for the open division and Sunday was a one day tournament for the women’s division. Switzerland had originally planned for their second phase of their open and women’s national championships to be held this past weekend but have since postponed nationals to a one-weekend tournament to take place later in August due to the COVID-19 pandemic. The Summer Kick-Off featured 13 open teams and 8 women’s teams. As each division only had a single day to play, games were shortened to 11 points with a half-time at 6. 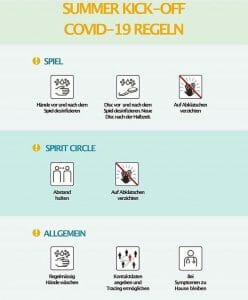 The tournament structure was not designed to crown a winner. The open division used a three-round Swiss draw format,1 and Crazy Dogs were the top ranked team at the end of the day. The women’s division played two separate pools of four teams. FABulous and Freespeed Ladies both went undefeated in their respective pools.

“Everyone seemed to be really enjoying being back on the field and play against other teams,” said Freespeed’s Gilles Neve. “I found the level of play quite high considering that we’ve only been training for four weeks. For most it isn’t about winning the tournament but rather trying out the new tactics and enjoying to be on the fields again. All in all, it looks like everyone’s mostly grateful to be playing ultimate again, also since the rest of the season is still so uncertain.”

Extra safety measures were in place. Most notably, players were to wash and sanitize hands and discs before and after each game. The disc was swapped out for a clean one at half time. High fives were prohibited during play and in spirit circles. In said spirit circles, players had to keep 1.5 meters of distance between themselves. Players were also asked to stay home if they exhibited any COVID-19 symptoms.

Switzerland is a nation of 8.6 million people. The country did not have as strict of a lockdown as some of its neighbors but gradually restricted activity from February 27 to March 20, when gatherings of more than five people were prohibited and non-essential businesses were closed down. On April 27, the country began to gradually re-open and regular sports training was allowed from June 6 onward. According to Worldometer, Switzerland ranks 37th in confirmed cases per capita and 19th in deaths per capita.2

As the graphs below show, Switzerland has been stable in daily new cases and daily new deaths since team sports began in early June.

Comments on "Switzerland Returns to the Fields"