Vote for the best team of the past decade. 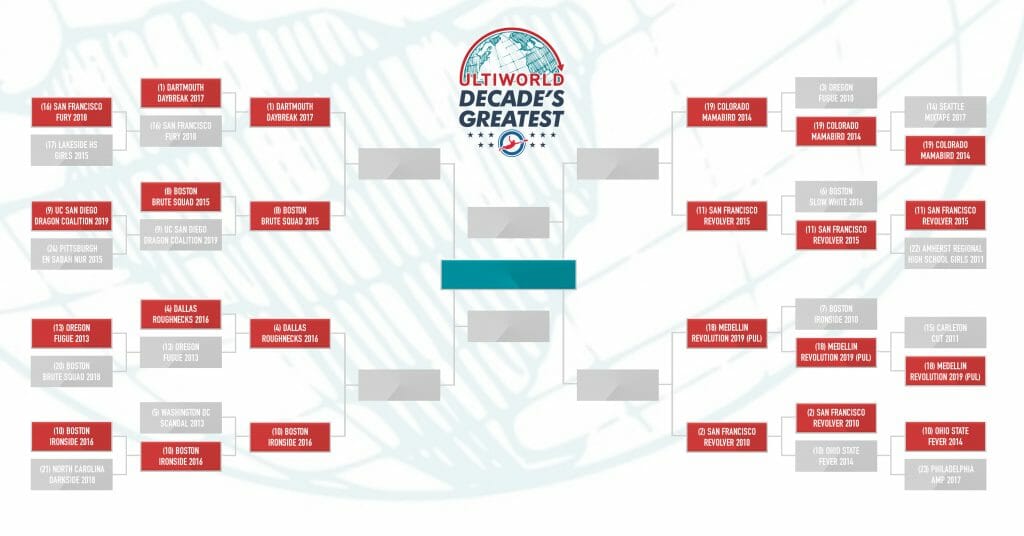 The decade had its share of dynasties with extended runs of excellence, while other teams had one or two outstanding seasons. The super programs are the ones you already know. But which team in which season was the best of the decade? We’ve culled the list down and are leaving it in the hands of our subscribers to decide.

We reviewed full-season results from every meaningful competition in North America from 2010 to 2019 to select 24 of the most dominant single-year teams of the decade. We excluded national teams — shout out to the 2010 WUGC Canadian National Team, the 2015 U24 Mixed US National Team, and 2010 WJUC US Boys National team — whose critical competition is simply too brief to really get a true sense of their greatness. Championships were highly valued, albeit not required for consideration. Our final field is composed of entrants ranging from high school squads to elite semi-pro outfits and nearly everything in between. The question is not who would win in a matchup between the two, but rather which team was more dominant and successful compared to their competition. Did Oregon Fugue’s 2013 team crush their college peers to a greater degree than Boston Ironside did to their club men’s opposition in 2016?

Our top eight seeds received byes, while the bottom 16 battled it out in a play-in round. Only eight teams remain — who will reach the final four?

For full write-ups of every team, head to the first post in this series. 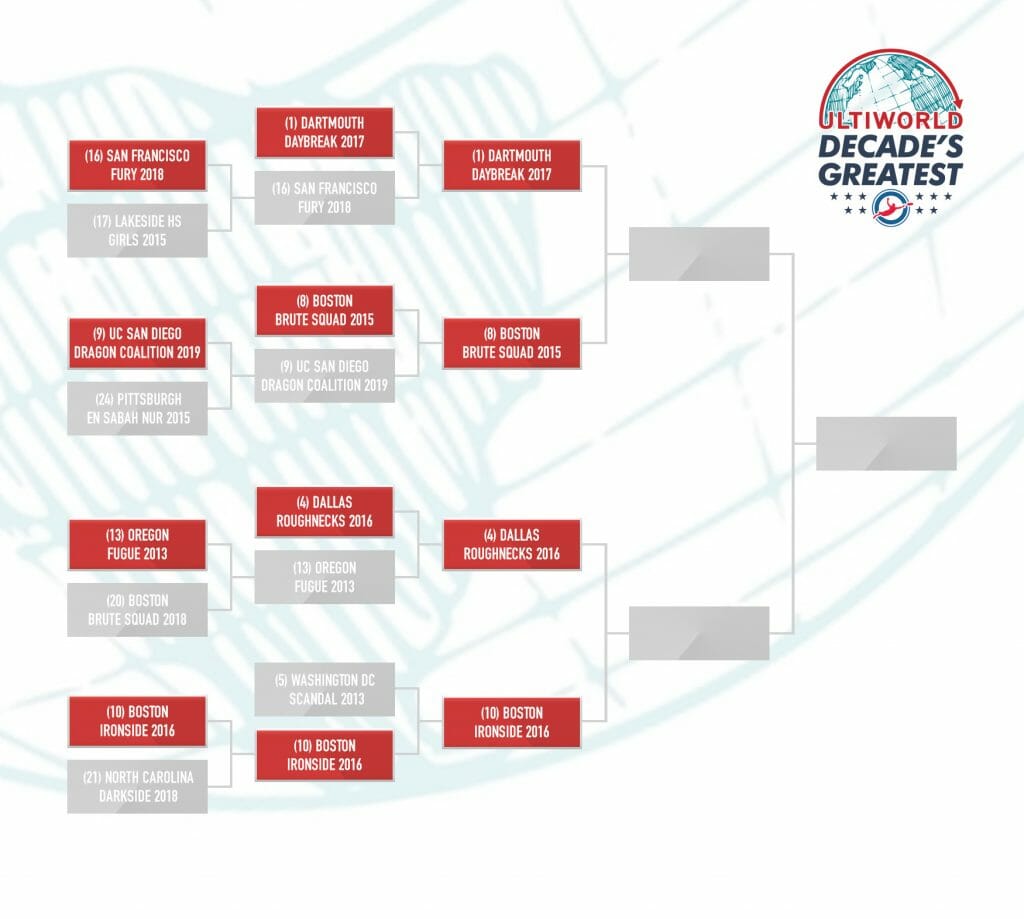 In some ways, this matchup pits the next generation of Brute Squad against the last. Julianna Werffeli, and Caitlyn Lee, and Claire Trop had yet to arrive on to the Boston club. Both achieved solid but unspectacular victories in the previous round — Dartmouth by about 10% of the votes and Brute by about 20% — and so this one is pretty unpredictable.

Roughnecks 2016 had the most emphatic win of the tournament thus far, eclipsing the 80% vote mark against Fugue 2013 in round 2. Meanwhile, Ironside 2016 was in the closest matchup of the round, beating out Scandal 2013 by just four votes. Doesn’t bode well for Boston, whose cast around Kurt Gibson will go up against Dallas’ impressive roster. Then again, Boston beat Beau and Cassidy for their title, so… 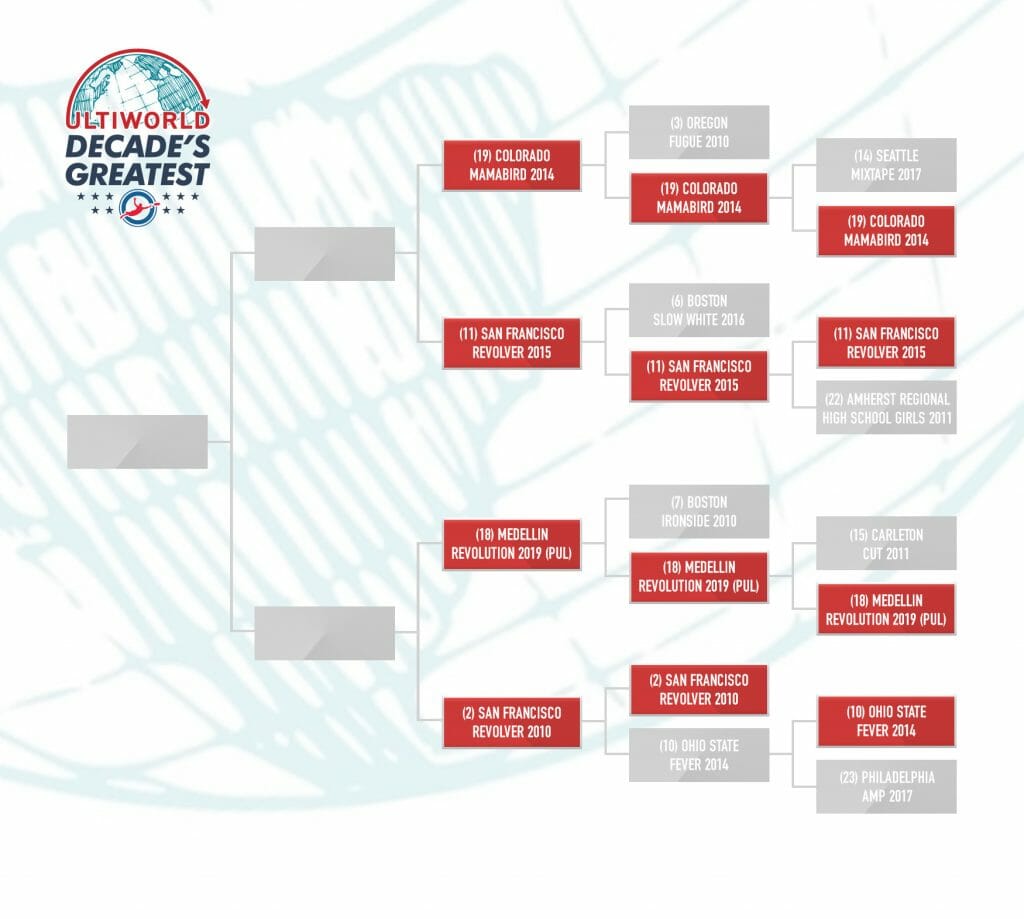 The lowest remaining seed in the tournament, Mamabird 2014 will face another victorious underdog, Revolver 2015. Colorado didn’t have too much trouble with the no. 3 seed, Fugue 2010, in round two, but their margin of victory looks small compared to Revolver’s 3-to-1 vote tally against Slow White 2016. Jimmy Mickle has conquered Revolver before, but the Triple Crown winners have proven to be a very difficult matchup.

Revolution continued to roll with another crushing performance in round 2. They had almost 77% of the vote against Ironside 2010. But can they take the team that beat Boston to end that 2010 season? Revolver’s championship caliber may give them a stronger chance against the Premier Ultimate League’s reigning victors.

With the bracket laid out, we now turn the decision over to our subscribers! Which team, relative to their peers, was the best of the decade? Voting for this round closes at 12 noon Eastern on Wednesday, July 15.

Bonus Content for The Decade’s Greatest: Best Single-Season Team Round 3 is only available to Ultiworld Subscribers

Comments on "The Decade’s Greatest: Best Single-Season Team Round 3"