July 30, 2018 by Charlie Eisenhood in Livewire with 0 comments 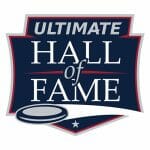 Ultimate’s Hall of Fame will be getting quite the boost this year. 12 new members have been selected for induction into the Hall — the group will comprise the 15th class.

The group will be inducted during this year’s National Championships in San Diego as a part of the festivities surrounding the sport’s 50 year anniversary. Read more about each of the new members of the Hall on USA Ultimate’s website.

Comments on "12 New Members To Join Hall Of Fame"