The latest rankings may include the closest call of all!

USAU released the final 2015 Club Rankings on Wednesday afternoon, accompanied with the Nationals bid allocation. It’s another exciting photo finish to the regular season, which seems to be the new normal for these announcements.

The major surprise is on the Men’s side: Prairie Fire appears to have edged out Condors for the final bid by less than 1 point after both teams finished with a rating of 1685. The margin is so small that a single point additional point scored in a regular season game by the Condors could easily have flipped the result.

As predicted by Ultiworld, Chain Lighting, GOAT, and Temper were the “next three” out on the Men’s side. That should set up some of the most thrilling regionals in recent history, as the Northeast, Southeast, and Mid-Atlantic regions will all be looking at two bids but three highly-regarded teams.

While Ultiworld’s analysis following the final weekend of regular season play predicted that GOAT and Chain would fall out of the bid cutoff zone, it also noted the difficulty in predicting the last team in. Indeed, according to USAU’s website, Prairie Fire eclipsed Condors by a fraction of a point — .34, to be exact — even closer than Rhino edge over Street Gang two years ago. 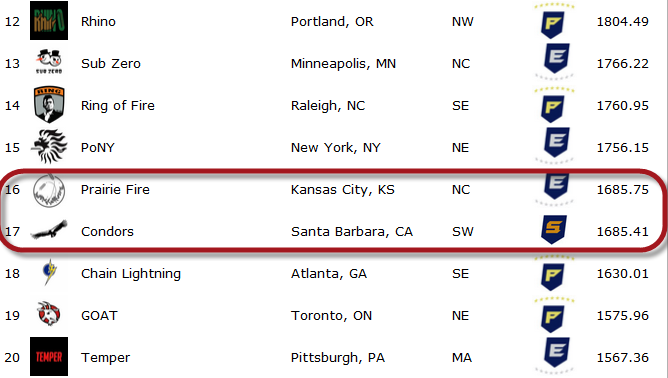 The final bid allocation in the Men’s division is as follows:

As expected, there was one major story line heading into the final Mixed rankings: Which of  Noise, Blackbird, and Cosa Nostra would collect the final bid? As it turned out, Cosa Nostra’s performance on Sunday at the Pro Flight Finale dropped them all the way down to #19, costing the South Central a bid.

And with Noise passing Blackbird and landing in the #15 spot, they secured the final bid (the Great Lakes, with no top 20 Mixed teams, is guaranteed 1 autobid). Southwest Regionals — which had five mixed bids last season — will be a bloodbath, with many quality teams fighting for just two spots. 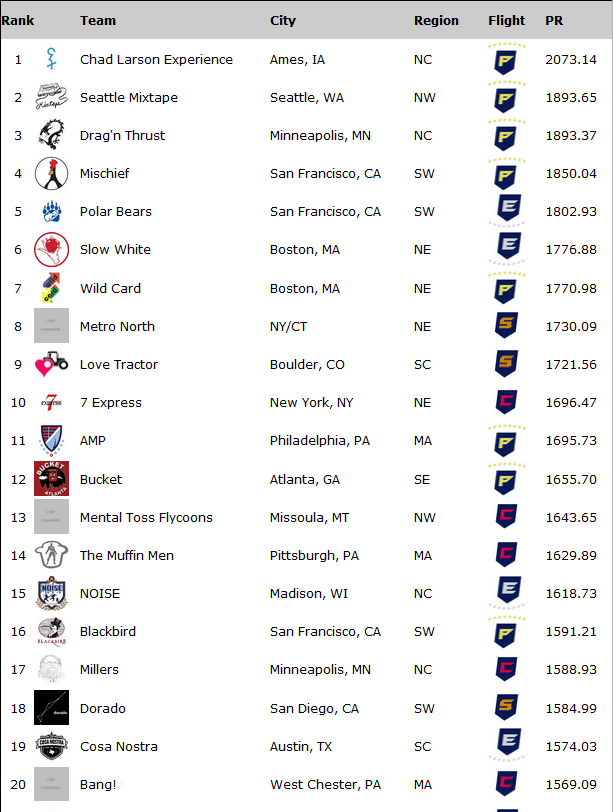 The final bid allocation in the Mixed division is as follows:

The bids in the Women’s division went as expected, with Showdown holding on comfortably — they finished a full 100 points ahead of Hot Metal for the final bid spot.  The Northeast region will have 4 bids, up from 2 last year. 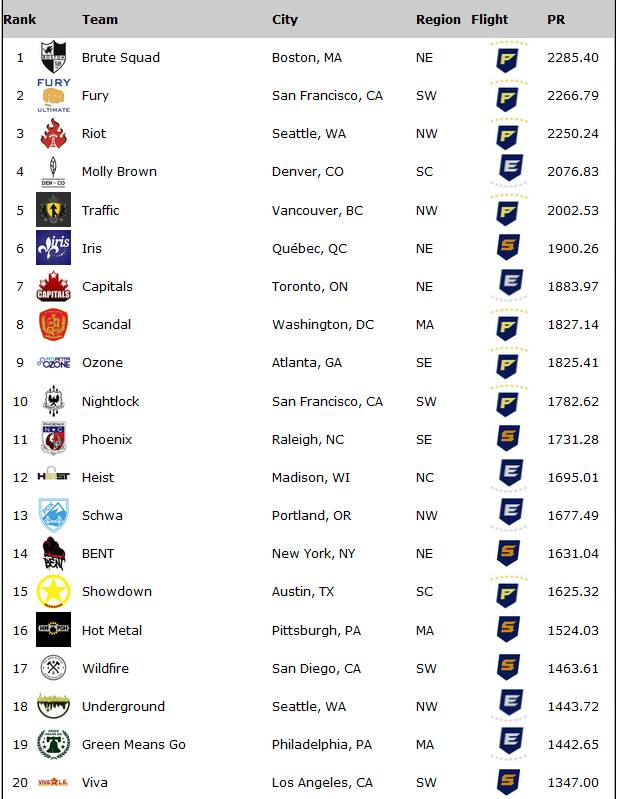 The final bid allocation in the Women’s division is as follows:

Revolver, Chad Larson Experience, and Brute Squad took home the regular season championships in the Men’s, Mixed, and Women’s divisions respectively, though not without some fight. Brute Squad edged out San Francisco Fury by 19 points in the Women’s division, and Revolver eclipsed Seattle Sockeye by about the same amount in Men’s.

Here are the full Men’s rankings (the full Women’s and Mixed are posted above): 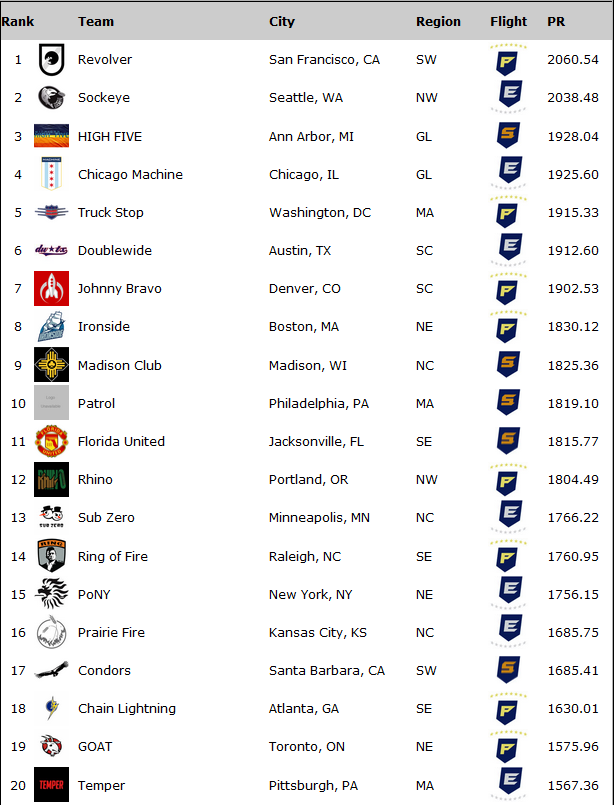 On the women’s side, the Pro Flight Finale results and latest batch of rankings almost guarantee that Brute Squad, Fury, and Seattle Riot will share the #1 seeds at Nationals, barring any major upsets at Regionals.  Exactly who between Riot and Fury will land in the #2 (versus the #3) overall spot is trickier to predict, as the teams have battled tight over the season and are currently 2-2 against each other. Fury’s 16 point lead in the rankings is quite narrow, but might be enough for USAU to give them the edge.

On the men’s side, things might be more complicated. Defending Champion Johnny Bravo has fallen to #7, but could (and, honestly, should) be seeded ahead of that at Nationals.  High Five, which began the season as a Select team, is now sitting at #3. And the possibility of storied teams like GOAT, Chain, and Temper stealing bids at Regionals from the higher ranked teams like Patrol, Florida United, or PoNY could cause further chaos. Predicting exactly how USAU will balance information from the rankings with past results, head-to-head results, and subjective impressions will be a fascinating story to watch unfold.

Comments on "Final USAU Club Rankings Arrive with Nail-Biters: Chain, GOAT, and Condors All Outside Top 16"