Stick With Observers: People Cheat More When There Are Referees

January 24, 2013 by Charlie Eisenhood in Opinion with 33 comments 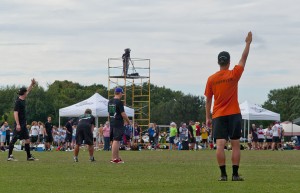 Yesterday, Ultiworld opinion columnist Alexander Palmer laid out his case for bringing full third-party referees into ultimate. As you might expect, the comments section has been fiery (worth a read). The comment below from Rob Barchard stuck out as a particularly thoughtful response.

He argues that referees alter the way the game is played as players begin to take advantage of the limited scope of the ref’s vision. He advocates for the current hybrid system — perhaps with expanded observer powers — to maintain Spirit of the Game, fair gameplay, and maximal rule following.

[quote]This is a well written and laid out article. I think you have clearly communicated and explored faults with self-officiating and to some extent observing. But there is a major hole here. [/quote]

[quote]You assume, and lead the reader to assume, that referees will instantly resolve non-compliance with the rules. I don’t believe this to be true at all. In fact, I believe that more rules violations will occur and go uncalled under a refereed structure. How many times have you or someone you know commented on the refereeing of a NHL, NFL, or NBA game? Unfortunately the quality of refereeing is just as relevant as the quality of players self-officiating. Worse yet, is that at the end of a game, players can always be content with the outcome of the game because they have the structure to control the officiating currently, while winning or losing a game over questionable refereeing is a much more souring experience.

Referees cannot, no matter their training, make calls as accurately as players in every circumstance. Admittedly, there are other times such as line calls that the use of another perspective is very valuable – observers handle this well. Knowing when a foul happened is about paying attention to how and where you were contacted, and the order of events in questions. All the fine details come into it and there are many times an outside perspective just doesn’t have the ability to know what happened as well as the players themselves, and in the event of disagreement – compromise- what a novel and excellent approach.

More to the point, I agree whole-heatedly with Lou Burrus. Adding referees will certainty erode the Spirit of the Game and community of Ultimate. It also adds to the infrastructure requirements of any event making the sport slightly less accessible. In, I believe the early 2000’s, the UPA (now USAU) received a letter from the head referee of FIFA regarding self officiating and refereeing. The sum of it was a suggestion to preserve self-officiating and avoid ever entering into refereeing. The main reason was very strait forward: in a refereed game, it the responsibility of the referee, not the players, to observe the rules of play. This is to say while playing in high level competition with a referee, players should begin to exist win-at-all-costs attitudes, so long as they can avoid penalties of getting caught.

Many years ago I played university nationals for ultimate the weekend after play club nationals at a junior level for water polo. Water polo is a very different sport, but it is entirely driven by the referee. The rules are such that it is in many circumstances it is advantageous to intentionally foul other players, even when the referee calls it. Most of the time it goes unnoticed and the advantage is amplified.

As a result the sport is violent, and in my experience, the players did not have nearly the respect for each other as in Ultimate. Translating this to Ultimate, a situation could arise where a marker simply pushes the thrower over before they get a chance to make a huck; in a refereed situation having a foul called on you could easily be advantageous to the potential point your opponent is about to make. In a refereed game you could, or possibly should, push the mark when the balance is in your favor. In our game, that doesn’t happen.

In soccer people dive, in waterpolo players strike ribs and faces when no one is watching, and in every other refereed sport, players draw fouls to gain advantage by manipulating what and how the referees sees an event. This type of behavior is not respectable and has no place in ultimate. Refereeing only opens the door for this. It doesn’t take long for this to happen either. Watching the first Alley Cats game of the AUDL I saw a player pivot in a way that involved contact – possibly drawing a foul – and begin to walk the yards before the referee even called it. Observers are an excellent balanced solution, and with fine-tuning could even better meet the needs of pro-referee advocates. If timeliness is the issue, give players ten seconds to resolve calls, at which point observers could step in like refs to make the call.

And what about the times you get hit a little bit and just don’t want to call it? I’ve got a player streaking long and it’s more advantageous to complete the throw than to call non-incidental but accidental contact? Players should focus on playing the game well and by the rules, not appearing to do so for the referee. It should remain the player’s responsibility to play by the rules, and when players disagree on what happened it takes only a second to involve the observer to make the call.[/quote]

Comments on "Stick With Observers: People Cheat More When There Are Referees"