Division II of Midwest Throwdown originally featured 24 teams in 8 pools of 3, but dire weather warnings prompted Grinnell and Purdue University to drop, and Carleton College Eclipse returned home upon news of last weekend’s tragedy. And so there were only 21 teams to duke it out in 5 larger pools on Saturday.  This reseeding didn’t seem to influence the play on Saturday: all the teams had some wintry rust on their throws and catches. Teams rediscovered their chemistry even as temperatures progressively dropped. Handlers were the stars on Saturday for many teams, patiently working the disc yet knowing when to punt to a cutter who could snag junk.

University of Northern Iowa Monium came into Midwest Throwdown as the top seed, and without the opportunity for cross-pool challenges, they ended the tournament as the only team in Division II with four strong wins. They beat  Washington University-B 11-4, they beat Missouri 11-3, they beat Northwestern-B 11-1, and they crushed second-seed Marquette 15-0. Liz Reuter, Dani Sweet, and Jaime Frahm marched the disc effectively up the field for Monium, and their better throws and inside breaks distinguished Northern Iowa from many of the Division II teams who had fewer veteran throwers.

Marquette University Moxie relied heavily on their handlers Devin Simonelli and Abby Mann to set and reset the disc, and they used frequent dish passes and quick handler movement to their advantage. They ran a 2-person zone that initially hampered less experienced teams in the mild wind, but they played a close game against Missouri that they just clinched at 8-7, and their zone must have been ineffective against the stronger handler core of Monium.

When I asked about Washington University-B, “Wubwub,” one coach simply said, “They’re a very tall team. Washington University has a tall future.” Their handlers were tall. Their cutters were tall. They used their height well, and they had decent hands, breaking seed over Northwestern University-B and University of Missouri.  Missouri had a large team, but they lacked the central handler who could direct their offense in the wind, and they couldn’t find the necessary offensive flow. Northwestern University-B was what a B team should be: enthusiastic, energetic, and relatively unskilled. They had hustling defense in their early games, but their players are still new to the sport, and the combination of wind and zone defense impeded their game.

Truman State TSUnami (#8 – DIII) dominated in Pool G, scoring easily against less experienced teams like Kansas State, Nebraska, and Mississippi. Handlers Jessica Zilch and Stephanie Sherman were effective in the wind for TSUnami, and they managed to shut down their pool. I would have liked to see this team match up against stronger competitors such as Northern Iowa, Drake, or Claremont College in their crossover games. Without any unexpected defeats on Saturday, this pool at least warmed up all four teams after a long winter.

The rest of the Division II pools saw upsets of the top-seeded teams: the Claremont College Greenshirts came into the tournament ranked 4th in Ultiworld’s College D-3 Ultimate Power Rankings, but they were stopped cold (forgive the pun) by Harding’s zone in their first game. Claremont didn’t give up after Harding took half at 8-2; Marianna Heckendorn threw several hammers over the cup and produced layout D’s for the Greenshirts, and they earned 5 more points before the game ended at 15-7. Sophomore Brooke Rice was everywhere for the Sky Bisons: she caught most of their scores, she played deep in their zone, and she pulled every point. Both Harding and Claremont College would go on to dominate Wisconsin Stevens-Point and Minnesota-B with only 4 total points scored by these teams combined on Saturday. 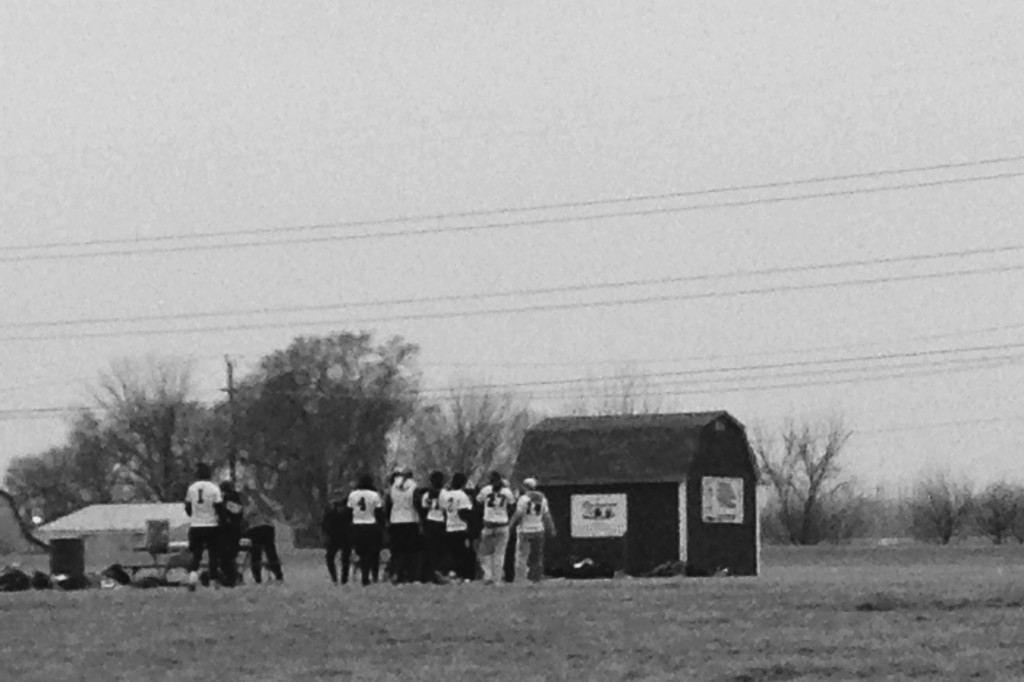 The Valparaiso Chicks Hucking Discs (#6 – DIII) played their hand on Saturday with a shuffled deck: many of their players were either absent or injured for Midwest Throwdown, so they began the day with few veterans who had to step into unfamiliar roles. Yet Teryn Gehred and Kelly Perfect still made an impact in their backfield while returner Ellen Guisfredi caught every other pass downfield on offense while generating handblocks on defense.

Valpo won a close and scrappy game in the morning against Drake University, who relied heavily on Lauren Perucco (Heist) for big throws. Their next game against Missouri S&T looked sloppier as the day – and players’ hands – grew colder and stiffer. Valparaiso pulled through to win 15-5, but their sluggish pace carried over into their final game against University of Michigan B-Fly.

B-Fly played patient and they played skilled: Amanda Alexander executed impressive grabs and throws throughout the game, and B-Fly was able to gain a 2-point lead before Valpo woke up and battled back to a closer loss, 7-8. Valpo is a strong team with a well-established D-III program, and a close game in miserable weather shouldn’t be significant for them, yet. But this game had to have tasted bitter for the #2 D-III team in the country.

University of Dayton Kraken was the final lower-seed team to rise to brief glory on Saturday when they broke seed 12-15 against Wisconsin-Milwaukee BlackCat in the first round. Milwaukee attempted a vertical stack that Dayton effectively shut down, and many of Heather Ahenen’s punts weren’t  connecting successfully. Dayton worked the disc upwind with a patient horizontal stack and with initial looks to Candice Otrembiak who was able to huck well in the wind. They broke seed again against Northern Michigan Aurora who thew a hesitant zone that Dayton broke through consistently. Northern Michigan couldn’t do the same: they struggled to move the disc to the break side going upwind, and they fell to Dayton 4-13. Bradley University The Darkside played zone with a nearly-savage squad all day, and their defense was effective – but a savage zone takes its toll, and Bradley had trouble converting when they did generate turns against all their opponents.

Last rounds ended, and most teams fled to the safety of cars, cars that would race the impending storm home. Harding and Northern Michigan lingered to play an abbreviated additional game, but both teams cleared out quickly after Harding won 6-0. Claremont College also stuck around to play up against Colorado State, losing 2-6; perhaps they were attempting to squeeze more pulp out of a sparse weekend book-ended by long flights.

The Division II pools were expertly crafted with plentiful crossovers in mind, but once again the weather had other plans. So I struggle to extract bigger meanings out of cold and blustery games – these games won’t make or break Division III rankings, and they won’t define a season. But, after 5 years of living in the middle of this country, I think I can point to a particular grudging pride that teams carry when they play weekends like the last. Sure it’s windy; it’s freezing; it may snow. But you love Ultimate, so you play – in gloves, hats, and layers. You complain about the cold, but you step on the line.

And thus Midwest Throwdown lives up to its legend, and another round of teams pays tribute to the brutal and bitterly cold tournament that takes so much and gives so little. This weekend may not have produced larger implications for any Division II teams’ rankings. But we’ll all be back next year.

Many thanks to Samantha Thompson (Spicy Tuna) for helping me cover Division II: without her meticulous notes, her expert analysis, and her companionship for 14 hours of tense Midwestern traveling. this would have been impossible.