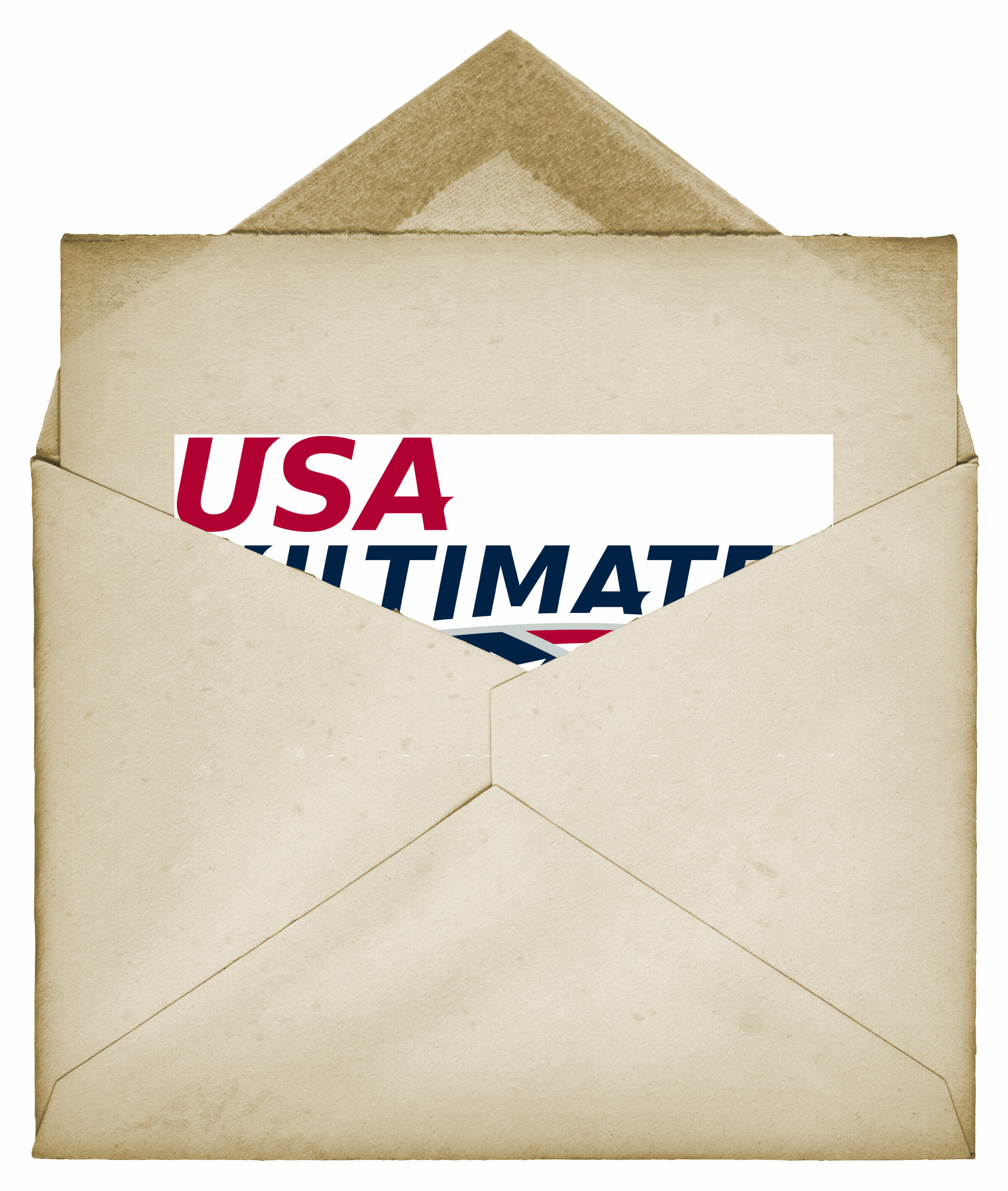 USA Ultimate published their first Ultiworld mailbag on December 22nd, three days before Christmas. Due to the timing, unsurprisingly, the article received no comments. This is unfortunate because USAU’s responses to some questions were truly important and gave insight into the organization’s process and thinking on some of the biggest questions facing Ultimate and the governing body. The content, however, was buried in very long answers and published in the depths of “no-one-cares-about-Ultimate” season. Here is my interpretation of the most meaningful USAU comments:

“First and foremost, USA Ultimate does not buy time on ESPNU, ESPN3, or any other network or distribution channel.” – Andy Lee, Director of Marketing and Communications

While not made explicit, I believe this comment is intended to address a critique that many involved and informed gender equity advocates have leveled at USAU regarding the implementation of their gender equity policy. The policy states that USA Ultimate coverage and promotion of the women’s division must be equal to that of the corresponding men’s division. However, partners and vendors aren’t held to the same standard and should only be encouraged to provide equitable coverage.

Gender equity advocates have made the claim that, since USAU is paying for ESPN3 streaming and more men’s games are broadcast than women’s on ESPN3, USAU has fallen short of their gender equity policy.

By stating that they do not pay for the time and (somewhat) clarifying their financial relationship with ESPN, USAU is attempting to defend their adherence to their own gender equity policy; it implies that ESPN is a vendor or partner and, by the letter of the policy, should not be held to the 100% equitability standard that the gender equity policy requires for USAU’s own media and that gender equity advocates are calling for. The presumption is that if all of the ESPN costs (production and hosting/air time) were covered by USAU, ESPN would essentially be a subcontractor and the coverage could be considered “USAU coverage” and subject to 100% equitability by the policy.

What USAU’s response fails to address, however, is what kind of “encouragement” they are actually giving to ESPN to provide gender equitable coverage. While perhaps the organization doesn’t buy “time,” all indications are that it is still putting in a significant amount of money into the production side of the broadcasts. Since the games are primarily hosted online, the production expenses are the overwhelming share of the actual costs of the broadcasts.

In addition to making the statement about not buying time, Andy Lee also wrote that ESPN was “thrilled with all of the content” thus far and that USAU and ESPN are in discussion to expand content. All indications are that USAU has a significant influence on which games ESPN selects for broadcast and have plenty of leverage to close the coverage gap. In fact, whether they are indeed abiding by their own policy is certainly not clear.

On top of it, USAU’s failure to address this issue fully, including failing to be explicit about the gender equity policy at all and how this comment is related, is concerning. In order to even get an assessment of what USAU is communicating about this, I’m having to do a considerable amount of reading between the lines. While it’s understandable that specific financial contract details can’t be discussed, it’s fair to expect a good faith explanation of how programming choices as they relate to gender equity are made.

As a player-focused organization, USAU should be facilitating the process to inform and provide transparency to their members to the greatest extent possible. This is doubly true when (a) the people who have been making these critiques are involved and information-seeking members and (b) USAU has used their gender equity policy as one of the key pillars for their case for not partnering with the semi-professional leagues.

Perhaps the biggest problem this brings up is a flaw in the gender equity policy itself and/or the mechanisms for monitoring its application. With a rule requiring “encouraging equity,” who is responsible for ensuring that USAU is doing a reasonable or sufficient amount of encouraging? A proposal by several gender equity advocates has been submitted to the Board of Directors for the upcoming Board meeting that hopes to address this issue with an independent “gender equity ombudsgroup” that would have additional access to information related to decisions impacting gender equity and help facilitate communication between USAU and its membership on issue like this.

On Affiliating with Big Leagues

“There is a long list of benefits USA Ultimate offers its affiliates that provide value to both small and large organizations. While some of the larger and more established organizations may in some cases already have one or more of these elements in place, they can still benefit from all of the various offerings.” – Melanie Byrd, Director of Membership & Sport Development

USAU’s relationships with the largest leagues is not typically a high profile discussion, but those relationships are critically important to the growth of the sport and the governing body. Currently, only a small percentage of players who play in US leagues are members of USAU. And the largest leagues like Disc NW (Seattle), BUDA (Boston), WAFC (Washington DC), and PADA (Philadelphia) are not affiliated. USAU should rethink their affiliate model to create tiers of affiliation and better support large leagues; a flexible affiliate model would result in members of leagues of all sizes becoming USAU members as well.

USAU is missing out in two big ways here: first, the opportunity for incremental-dues revenue from players who participate in leagues but no other USAU programs. As USAU attempts to grow, add staff, and do more outreach, one of the biggest constraints to that growth is funding.

Second, USAU loses the opportunity to increase their reach. With more members, USAU would have more players whom they could contact through e-mail and other channels. An increased membership would help USAU more successfully promote programs and attain sponsors and media partners.

Currently, USAU’s affiliate program is a one-size-fits-all program. The biggest benefits for small and medium-sized leagues is liability insurance and the ability to process waivers. The largest and most organized leagues, however, can independently obtain insurance and process waivers in a much more cost-effective way than the $10-15/player that it would cost them to affiliate with USAU. While the organizers of those large leagues might agree with the concept that all players should be supporting USAU’s efforts to structure and grow the sport, the financials simply don’t work out.

A league that supports 5,000 players may be looking at a cost of $25,000 or more to move from their own insurance policy to the USAU affiliation. That’s a significant amount of money to a local organization that they could be spending on their staffing, local outreach, underserved community program development, or simple cost decreases for their own league participants.

USAU has been working on their affiliate program for over ten years now, but the vision and structure still seems to be limited and not adaptable to the needs of growing Ultimate populations. This is unfortunate because, in addition to the benefits that USAU would receive if they could garner affiliations with the largest leagues, one would suppose that there would be efficiencies of scale to a larger insurance policy that would allow everyone involved to lower their insurance costs. All of this is particularly concerning as more leagues are moving into the “large league” category with the growth of the sport.

It’s been said that the best leaders don’t create followers; they create more leaders. USAU would be wise to rethink their affiliation model to both draw in the largest leagues and capitalize on those leagues’ ability to have a bigger on-the-ground impact in achieving USAU’s vision for the sport. A model in which local disc organizations that meet certain criteria that include membership size, local and regional USAU event hosting, outreach activity (clinics held, coaches and observers trained, women’s outreach, physical educator outreach, support for underserved communities, etc.) receive USAU membership at a rate that is below whatever the insurance rate the local organization would otherwise pay would spur local leadership and investment in growth.

For areas where leagues were performing adequate development outreach, USAU would not have to invest their own development funds and would be able to redirect those funds toward smaller, less organized communities. While the USAU budget would not see as large a direct influx of cash from large league affiliation, a structure of this sort would better help achieve USAU’s mission. It would expand USAU’s membership rolls and empower large local organizations in delivering USAU programs and others that support USAU’s goals.

Overall, I am really pleased with the new USAU mailbag. While I have some disagreements with the organization, it’s great to see them joining the grand conversation about ultimate in this form.