June 1, 2015 by Andy Philipson in Profile with 2 comments 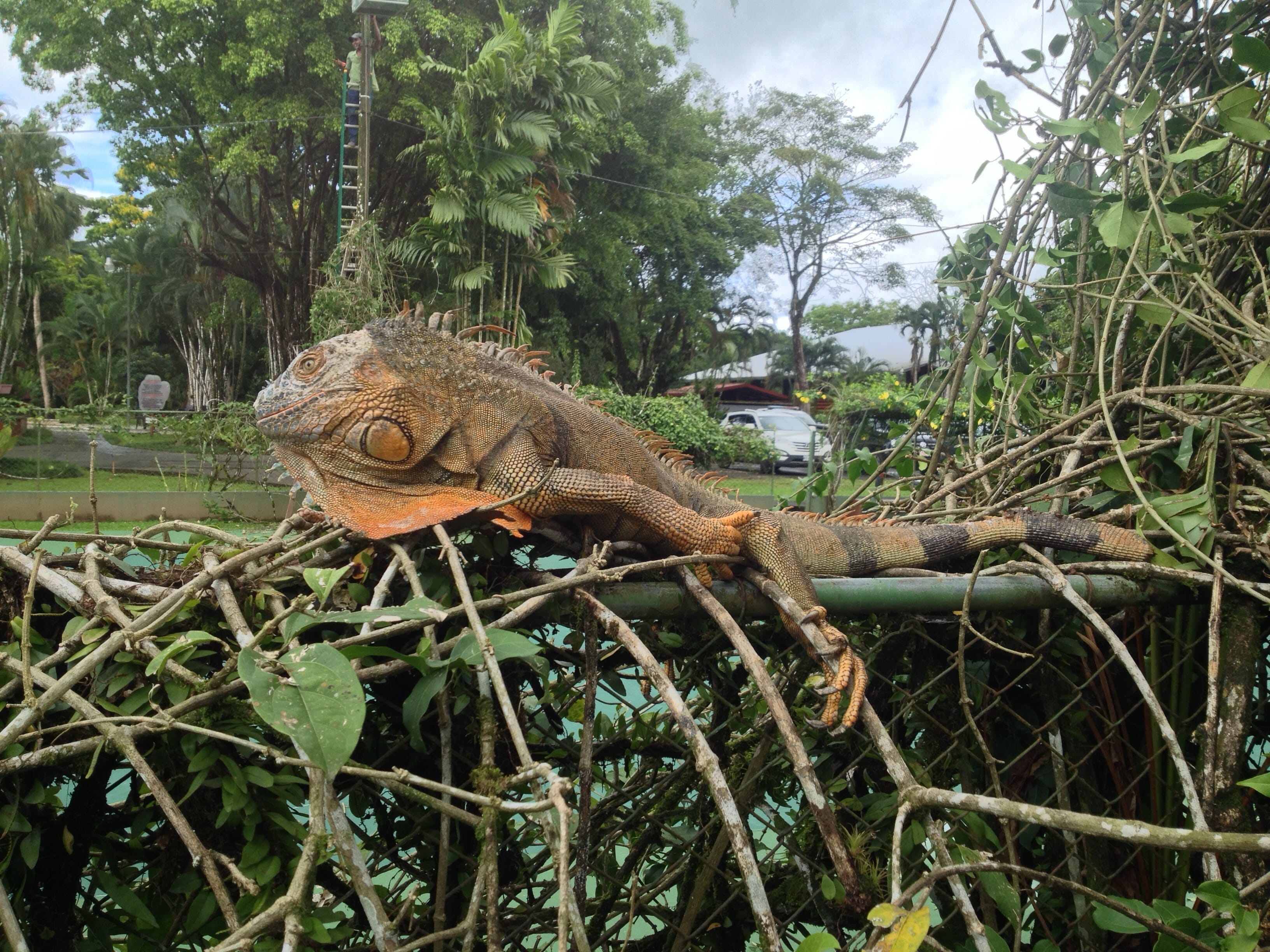 Very rarely will I go to a hat tournament and not know anyone there—the game of Ultimate Geography has gotten so wonderfully complex that it’s impossible. No matter where you play you always find someone who was on a club team with your buddy from school, who dated a summer league teammate, or who stumbled into you blind drunk at Wildwood.

But what about players from other countries, or other continents? I’ve played a lot of Ultimate in my life but I’m not about to crack the national squad and head to Dubai for Beach Worlds to get my groove on with Team Kenya. Instead, I booked a flight to Costa Rica and enjoyed the next best thing—the Volcanic Ultimate Tournament.

The idea is simple enough—organize a 2-day hat tournament in the middle of the rainforest to bring together American and Costa Rican players for four days of ultimate, exploring, partying, and bonding and send them home with new friends, a few crazy stories and countless plastic bags filled with the wettest, muddiest clothing imaginable.

The TD of the tournament is Carlos Chacon, a Tico (that’s slang for Costa Rican) ex-pat who lives in South Carolina. He’s been hosting the tournament for 8 years, coming home to play some Ultimate with a crew of wide-eyed Americans and eager Ticos. Normally he splits the participants into six teams with an equal mix of foreigners and nationals, but after interest from a Panamanian club team this year’s edition of Volcanic Tournament was five hat teams and one club team.

Fortunately for Americans, it isn’t a problem if you don’t speak any Spanish—the majority of the Costa Rican participants speak at a pretty high level, or you’re bound to found an American on your team who can get by. Plus, the vocabulary isn’t that different—the word for flick is “flick,” backhand is “backhand,” handlers are “handlers” and cutters are “cutters.” To whomever brought ultimate to Costa Rica, English speakers of the world thank you for simplifying the vocabulary.

(I should note that some Spanish speakers call a handler a manejador, which translates to driver, but everyone understands the English words)

The Volcanic Tournament is hosted and played at a beautiful hotel resort in the north part of the country; my friends and I remarked that we had never had a tournament lunch any better than a dry bagel and pickles before coming down here. The fields are some of the best I have ever played on…until we kind of wrecked them in the last rounds as a brutal rainstorm passed. I should make it abundantly clear: don’t come to Costa Rica and expect it not to rain.

Still, we were able to get four games of round-robin play in on Saturday without any major issues. This author’s proud team may have gone winless, but low expectations give plenty of time to network with other players. Among the participants are Americans living and teaching in Costa Rica, Venezuelans looking for some competition, Colombian students in San Jose, and plenty of Costa Ricans from all over. Central American ultimate is a fairly tight-knit community—in Costa Rica at the least there isn’t much more than this tournament and a weekly pick-up game in the capital.

For those like me who have little-to-no experience with international players, I think it’s pretty easy to assume that your average Tico, Pana, or other Latino player won’t be as talented as their American counterparts.

During my team’s game with the Panamanians we got to talking—most of them learned ultimate as a result of the NGO Ultimate Without Borders, founded by Ben Searle during his service as a Peace Corps Volunteer in the country. The team does good work—the Panamanians were filthy.

More than that, I couldn’t get over how spirited they were. It’s pretty tough to like a team after they bagel you into halftime, but the Panamanians exemplified what makes this tournament so special—it doesn’t matter how different two peoples’ backgrounds are, Ultimate brings us all together. Yes, they stall and cheer in Spanish and their spirit circles are wacky, but it’s impossible not to see their team as a mirror image of so many fun summers I had playing club back at home, just better behaved.

We finished up play on Saturday and packed in to relax before the tournament party, fruitlessly leaving our cleats out to dry in the ridiculously humid air.

Fortunately enough for us the rain abated long enough to make it out to the pavilion where the music was raging, beer flowing, and a number of excited Americans were trying to teach the Ticos about the joys of flip cup. It’s amazing what a few Imperials can do to bolster your confidence and bring back middle school Spanish classes.

Close by raged a shadow war between the Americans and the Ticos over music control; you’ll never hear a stranger mix of dance, rap, rock, salsa and reggaeton at a Frisbee party in your life, that’s a guarantee. That being said, we hit all the favorites and the Ticas were more than willing to teach us gringos a few dance moves.

We woke up Sunday a bit groggy, our vision matched by the haze that hung over the fields. After a few minutes of warmup the skies opened up, the ground that had held so firm for the day previous finally showed signs of wear and tear, and our yellow jerseys started to look far browner.

After a tight game (and loss) against the white team, our tournament ended, but with the rest of the teams we headed over to the far field to watch the juggernaut Panas take on Orange for the championship.

I’d like to say that the spirit of worldliness and cultural exchange reigned supreme, but it was pretty clear from the opening pull that the entirety of the onlooking crowd were trying to will Orange to an upset over the undefeated Panas.

The game was quite back and forth with Orange taking half up a few breaks, though a quick run by Panas put them back in the game. Orange was barely holding on until a poorly advised (read: best decision) blade-hammer was snagged one-handed over the outstretched arms of a diving Panamanian. Seriously, it was an incredible catch. An immediate “ohhhhhhh” exploded through the crowd and Orange took advantage of a dazed Green; two points later a tipped swing pass was ripped down for a Callahan, and the game, and the tournament.

In yet another display of their incredible spirit the Panas were quick to congratulate Orange for winning before regaling us with their ever-famous “Piel!” chant: you shout “Piel!” (which means skin) until someone starts to take off their shirt. What did I tell you—it’s a different language and culture but Ultimate is the same everywhere.

We all showered off and met back at the busses for one final trip before heading home the next day—Arenal is world-famous for its aguas termales, or natural hot springs in English. I figured it would be a few hot tubs with piping that heated up the water—not so.

Instead, after a short hike through the rainforest we arrived at an opening filled with a succession of small pools connected by steaming waterfalls. At the top of the complex was a natural spring spewing super-hot water—the further down it got the cooler the pools became.

So there I was, relaxing in a steaming hot tub with a cold drink in my hand in the middle of a beautiful rainforest shooting the breeze with Panas, Ticos and Gringos, all new friends. It doesn’t get much better than that.

I don’t know how you sum up the Volcanic Tournament. It’s pretty surreal to play ultimate with someone who shares zero ultimate experiences with you and doesn’t speak too much of your language. It’s also pretty crazy how much more smoothly the games went than your average summer league game — foul calls outside of picks were pretty rare and spirit was incredibly high.

More than anything, I was shocked at how quickly the tournament shifted away from six individual teams and toward one large, multi-ethnic family. Maybe it’s being in the middle of a tropical paradise surrounded by volcanoes, monkeys, crocodiles and iguanas, maybe it’s just that this batch of tournament participants were predisposed, or maybe it’s the 100% humidity, but I can honestly say that I returned home with dozens of new friends. You don’t go to Costa Rica to launch 80-yard bombs, up your career tally of layout Ds, or work on your spike game; you go there for the people.

You go to meet Harold, a Panamanian handler whose flick fake put people on the ground all weekend.

You go to meet Carlos and Fico, the Costa Rican brothers who selflessly run the show.

You go to meet Andrea from Colombia and have a layout contest with her.

You go to meet Ferdinand from Germany and smile as he finds four Scandinavian girls to come to the party.

You go to meet Rommy from Costa Rica and have her teach you how to salsa.

Whomever your reason, I hope you go to Costa Rica and live it up; I’ll see you next year.

– When booking flights for San Jose, Costa Rica, be sure that you aren’t mistakenly flying into San Jose, California.

– The four days the tournament spans are not nearly enough to enjoy the natural beauty of Costa Rica. I was fortunate to get a week off from work and spent the other three days exploring the beach and the capital. I’d highly recommend doing that.

– The grocery store in the nearby town of Fortuna carried local beers Imperial and Pilsen… also Milwaukee’s Best Ice. Props to the people at Milwaukee’s Best for managing to get a buyer all the way down in Costa Rica.

All photos were taken by the author.