April 7, 2015 by John Phillips in Preview with 3 comments

Year two did not provide the fairy tale Championship ending for the Toronto Rush that the team’s inaugural season featured, but they remain the team to beat in the AUDL East. With the deepest and most talented roster in the Division, the Rush look poised to return firing on all cylinders heading into 2015.

The teams up North overall seem to be the most intriguing, with the Rush, the Montreal Royal — the only team in the East to ever defeat the Rush — and the Ottawa Outlaws, entering into their inaugural season. Back in the States, the New York Empire bolstered their roster while the D.C. Breeze lost a few big pieces heading into this year’s slate. Let’s take a look at the state of the AUDL East. 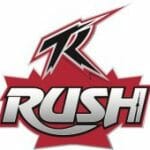 While the Toronto Rush came up short on Championship Weekend last season, losing to the San Jose Spiders, the 2015 Eastern Division will still run through Toronto. Over their first two seasons in the league, the Rush have only lost twice, and with all of their main contributors returning, the other six teams in the East will be playing catch up throughout the year.

The Rush run through leader Mark Lloyd, who played over 370 points for Toronto while posting 46 goals and 45 assists in the regular season. He has showed sustained excellence on both sides of the disc, making plenty of highlight plays along the way to being one of the top five players in the league. Lloyd has plenty of help on the field, including the likes of Jeff Lindquist, who finished the year T-10th in assists with 41, and Cam Harris, who was third in the Eastern Division in plus/minus in 2014, closing the year at a +73.

While the San Jose Spiders may have laid a blueprint for beating the Rush — put the pressure on Toronto to make big plays in the air on D while forcing them into mistakes on offense — it remains to be seen whether any other team in the East has the personnel to do that.

Montreal ended its season on a high note last year, handing the Rush their first regular season loss. Heading into 2015, however, whatever momentum the Royal may have been able to carry over from last season is offset by the loss of their leader in assists and their top two goal scorers in Eric Dion, Tim Tsang, and Chuck Cantone, respectively. Yoland Cabot will be expected to have an even better year than in 2014, where he posted 23 points and 23 assists.

Still, the Royal impressed in their first season, hanging tight with teams that were expected — on paper — to beat Montreal handily. That process of learning how to win culminated in their victory over the Rush, and the mentality should carry over to this year. The Royal had trouble winning air battles in their first season, and that has been a big point of emphasis heading into this year. With a strong core group returning, Montreal looks ready to fight for a playoff spot in the East.

The big signings that the Outlaws have made heading into their inaugural season show that they are ready to compete with the rest of the Eastern Division right away. Derek Alexander, who had a wonderful Nationals in 2014 playing with GOAT, was the Outlaws’ first signing, and potentially the most important. Having a steady, experienced handler is invaluable, but the fact that he has experience playing with plenty of the players on the Rush is an added edge.

The same goes for captain Karl Loiseau, who played for the Rush the last two years. The understanding that Loiseau, Alexander, and others on Ottawa have of the two-time Eastern Division champs is an X factor heading into their inaugural season.

On the field, the Outlaws hope to capitalize on their strong handler play while not being afraid to take chances downfield. It may be unrealistic to think the Outlaws will come close to taking down the Rush in their first season, but look for Ottawa to compete with the rest of the East. Ottawa’s deep and large community of ultimate players should also give the team a significant home field advantage.

The Empire were a pleasant surprise last season, making it all the way to Championship Weekend before falling badly to the Rush in the semi-finals. Still, the Empire have momentum heading into the 2015 slate, especially considering the two big signings they made in the offseason.

Jack Marsh returns to the Empire after playing for the MLU’s Rumble last year; he’s joined by Rumble teammate Ignacio Yz. Marsh has all the tools to make a huge impact in big games, while Yz has top-class speed paired with the willingness to leave his feet at any moment. Offsetting those pickups is the loss of the players from North Carolina that donned the Empire uniform last season, including Noah Saul, who posted 56 assists over 14 regular season games.

They join a roster without any one superstar, but with plenty of strong athletes who know their roles. Matt Stevens finished second in the league last season with 61 goals. Isaiah Bryant, the heart and soul of the Empire, will lead their defensive effort in 2015. Also returning on the defensive side are the Drost twins, who remain underrated parts of a very good New York defense.

The Breeze will have a distinctly different look this season, losing three stars to the Pittsburgh Thunderbirds in Tyler DeGirolamo, Alex Thorne, and Tyler Kunsa, as well as Brett Matzuka to the Chicago Wildfire. Without any big signings to offset the loss of those players, look for the Breeze to be focused much more on playing strong defense, and protecting the disc to the best of their abilities on offense. They will not be as strong a team this season.

The brightest star that the Breeze has going for them is coach Alex Ghesquiere, who also coaches two-time Women’s Club National champion Scandal and has coached Team USA in the past. In his comments leading up to the season, he made clear the teams’ approach this year would be much more systemic rather than relying solely on individual talent. If anyone can build a team from the ground up, it’s Ghesquiere.

After winning their first game against the Philadelphia Phoenix, the Rochester Dragons went on to lose the last 13 games of their season by an average of 10 points per game. It was rarely pretty for the Dragons, and from the looks of it, this season will not prove to be much better.

The biggest bright spot in the Dragons’ season last year was the mix of scoring and defense that Dave Ferraro (PoNY) provided. However, just days before the season kicks off, his name is absent from their roster. Kevin Quinlan will have to pick up the slack. Quinlan led the Dragons in assists last year, but he will need to do a bit more for the Dragons to work out of the Eastern Division cellar this year.

The Philadelphia Phoenix were only a tad better than the Dragons, proven by the fact that the Dragons won their only contest against Philadelphia. However, with David Brandolph (Patrol) serving as the Phoenix’s head coach while recovering from knee surgery, and with Lindsey Arnone stepping in as the Phoenix’s general manager, it looks like the culture surrounding the team is changing, even if the wins on the field don’t come.

Ken Wells, the Phoenix’s standout from the 2014, won’t return to the roster for 2015, but Philadelphia will return Sam Esser, who brought a strong effort as a two-way player, and welcome back Rob Allan, who was a key player for the Phoenix in 2013 before taking last year off.

Just when it looked as though the Rush might be even slightly vulnerable after falling in the 2014 championship game, the rest of the East grew weaker. Montreal, New York and D.C., the three biggest threats to the Rush, all lost valuable pieces over the course of the offseason, while the Rush returned all of their heavy lifters. Barring some unforeseen circumstance, the Rush should walk away with the Eastern Division crown without much trouble.

Despite losing major talent, however, Montreal, New York, and Ottawa will all be jockeying for position throughout the year. Montreal still has its core intact, and New York’s acquisition of Marsh and Yz may help the team stay sharp on offense. Ottawa’s roster is impressive on paper, and it’s fair to say that the Outlaws will compete for a playoff spot.

Despite going 10-4 last year, D.C.’s upside is small. With the list of players composed, it will be hard for the Breeze to hang on in close games against good opponents, whereas with the likes of DeGirolamo, Thorne, and Matzuka last season, D.C. had more staying power.

Philadelphia and Rochester didn’t make any moves that suggest that they will rise out of the basement, but at least in the case of Philadelphia, with a new GM and coach, change will be in the works; it just will take time.

Look for Toronto to pull well ahead of the rest of the East, with Montreal, New York, and Ottawa duking it out for the other playoff spots. Any games involving those four teams will be worth watching, as the competition level will be high and evenly matched, while D.C., Rochester, and Philadelphia may struggle to hang around through four quarters in most games.