It was a great run.

In which our heroes are sent packing.

Daniel: It’s taken me a while to muster up the courage to finally watch this episode. Our own Charlie Eisenhood spoiled the ending for us, and that really stuck in my craw. I had a feeling this would be the end of our boys, but knowing for sure that it was genuinely upset me. Of course, there was no SPOILER ALERT warning, and that had a bit to do with my saltiness, but mostly I was upset that I’d spent all this time watching this show for it to ultimately be for naught. It was a hell of run — our boys were absolutely dominant for a stretch there — but in the end they wilted like the Washington Capitals in second round playoff series once Brodie actually had to do something. Now it’s time to dissect it all to the best of our ability.

Katie: Oh, Brodie and Kurt…the tragedy that they’re gone while Sheri and Cole are still in it. Like the 1-seed upset by the scrub team who’s just at Regionals for a good time and “giving rookies experience.”

Daniel: Various thoughts throughout the episode:

Katie: It’s too bad that #TeamKrodie is gone, or I would put my cultural anthropology degree to use to go in on whatever the implications of this thing are: 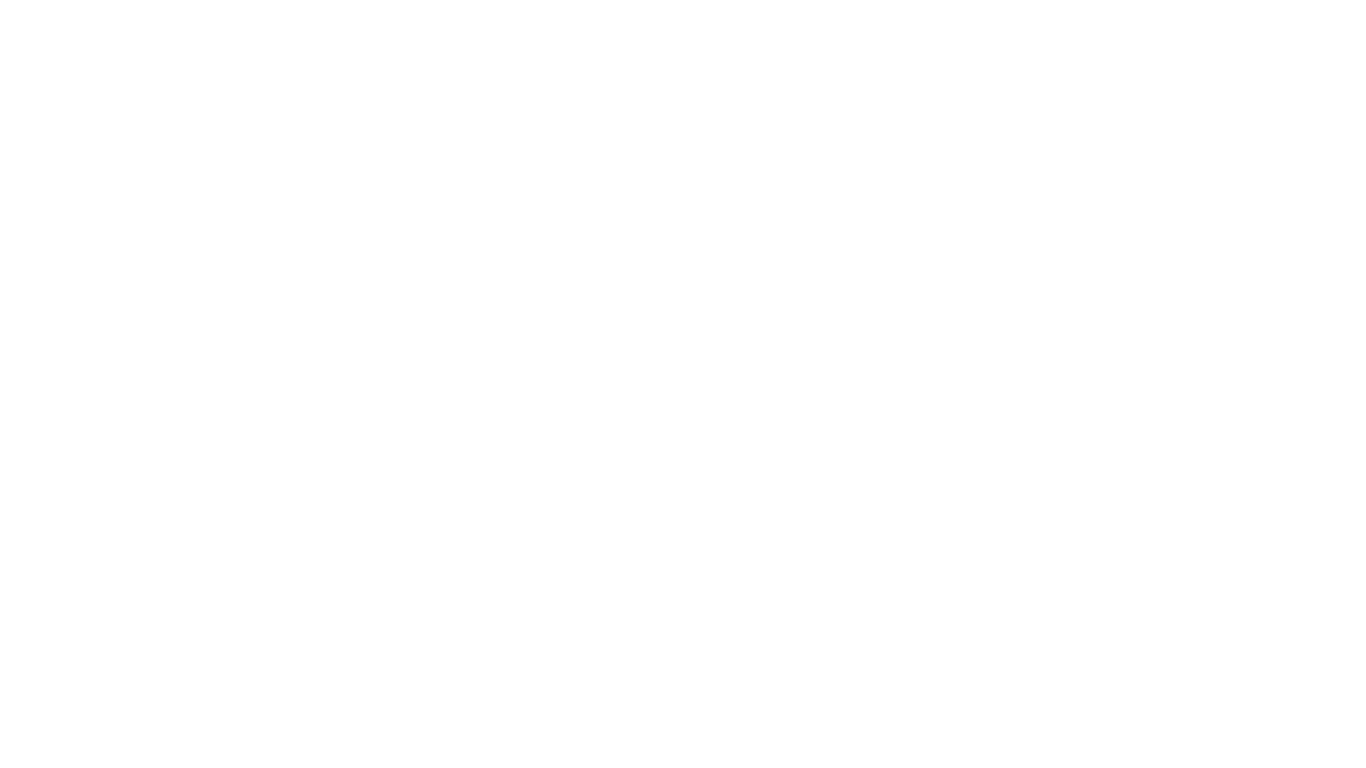 Patrick: Conspiracy Theory: Producers knew it was bullshit that Krodie got eliminated in a leg in which there was no feasible way to make up ground after a U-turn, so they planted a bunch of seeds last episode about them not managing their roadblocks correctly to throw people off the scent and say “hey, they should have managed their roadblocks better or else they wouldn’t be in this mess” when in fact the roadblock thing made NO DIFFERENCE because the kite fiasco would have happened regardless since whichever partner WASN’T selected to do the salt thing had to make the kite which means that IF Krodie had better managed their roadblocks and they were even, giving Kurt the opportunity to do the salt challenge without the knowledge that Brodie had to do the next roadblock, IT WOULD HAVE LEFT THEM IN THE SAME SPOT so ultimately the roadblock BS was a smokescreen to try to shift the blame from putting the U-Turn on a leg that made it IMPOSSIBLE for our boys not to get eliminated once the other teams ganged up on them because the show couldn’t deal with their precious Tyler and Korey fanbase seeing those smug, gutless, disingenuous leeches lose in the finals, and yes this is all one sentence.

Keith: Pat, think you’re on to something here. Would you be shocked if Jim Gerencser was somehow involved? That guy’s money is everywhere.

I wonder if Brodie was thinking “Man, this is rec.sport.disc all over again…”

They both know about being in the front and having everyone dislike them. I did find the turmoil it caused for the others teams an intriguing plot point, especially when seasoned with Brodie and Kurt’s “Burnie and Ashley wouldn’t U-Turn us” theory.

Katie: I did a little research, and there are so many different features like a U-Turn in this show. In the past there have been u-turns, double u-turns, double blind u-turns, anonymous u-turns, yields, intersections, battles, face-offs… WHY DIDN’T WE SEE ANY OF THIS? This U-turn felt like an afterthought instead of an integral part of the race’s structure. /rant

Keith: But to be honest, were our boys really the best team? Would I say they were better racers than Burnie and Ashley or Tyler and Korey? Obviously, they are superior to Dana and her flying monkey as well as the Roll Tide duo. But I can’t say with confidence they would have beaten the other two in a finale. It isn’t clear to me how much they could have leaned on Kurt in the last leg, but Brodie just kept coming up like the weak link.

Simon: I should point out, there isn’t a single shot in this last episode where Brodie is actually carrying his backpack while running, but he is dragging his knee brace all over the place. He was gassed.

On the other hand, my man Kurt knows how to mask for maximum exfoliation: 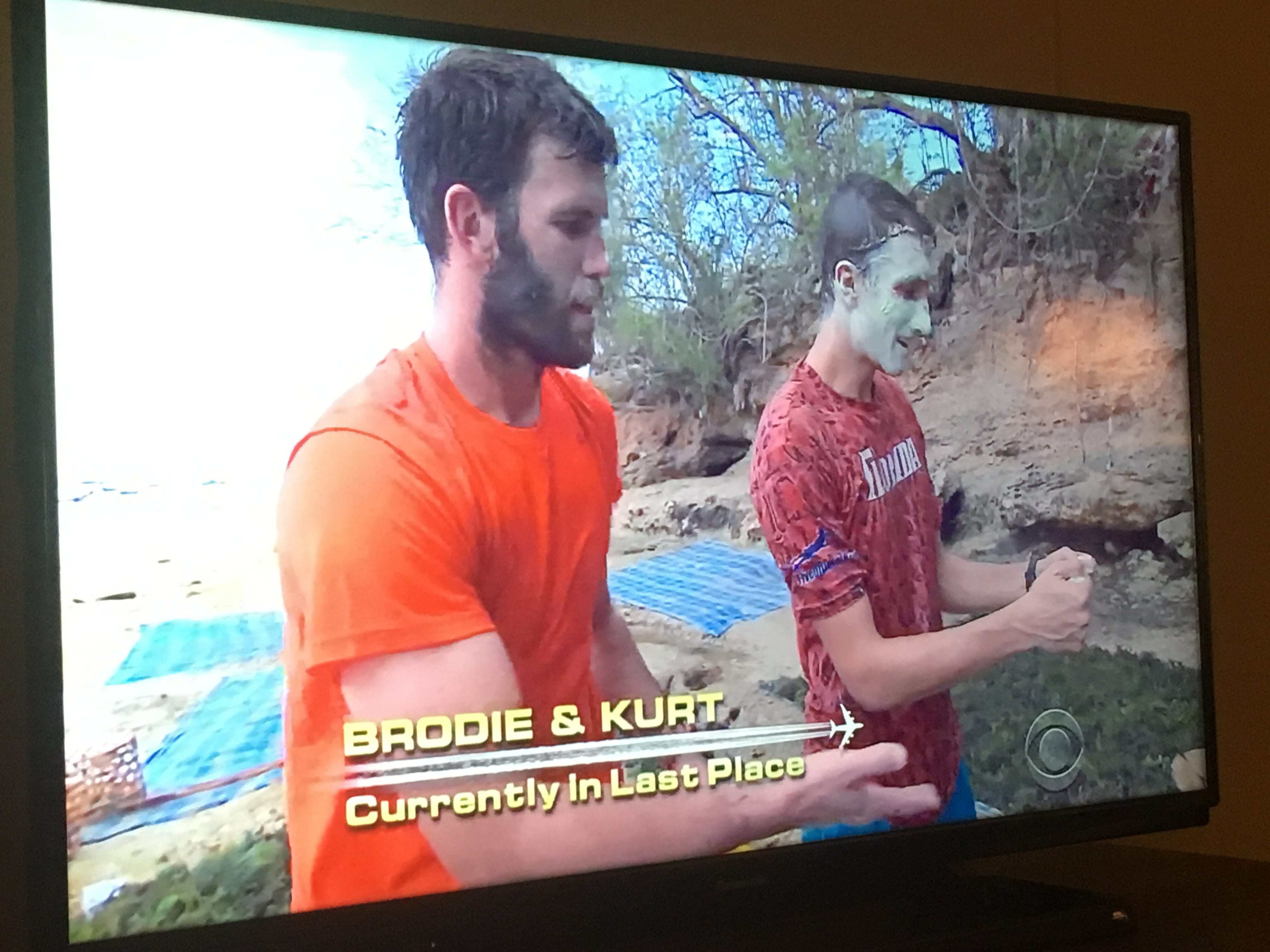 Daniel: Brodie was definitely a weak link for most of the season, and I’ve ripped him time and again for it, but he was actually competent in this episode. They would have finished a comfortable third, if not higher, if it weren’t for the U-Turn. It’s a shame they weren’t able to make the final. They may not have been the best team, but they were definitely top three. And let’s not forget that Tyler and Korey were lucky to not be eliminated in the episode that Blair and Scott kicked the bucket. Regardless, it’s a downright travesty that Dana and Matt and Cole and Sheri are in the final four. Screw this show.

Patrick: I’m going to defend Brodes here: I think the producers made a bigger deal out of his shortcomings than is actually fair as a way to make it seem like they somehow deserved to lose as early as they did. Brodie totally botched the kite thing, and giving up on the puzzle so soon seemed rash, but remember it was a team decision. I think that while Kurt definitely soared above the competition, Brodie was solid, especially considering he was dragging around a bum knee the whole time and by the last leg had somehow lost his shoes (which, more details on that, please).

*puts on crown of leaves and elf ears*

If we Krodie have offended,
Think but this and all is mended,
That we but watch’d here,
While these racers did appear.
And this weak and idle theme,
No more yielding but a dream,
Viewers, feel free to reprehend:
Tyler and Korey brought about the end.
And as I am an honest guy,
If we have Krodie t-shirts to buy,
Now to ‘scape CBS’ grip,
We will embark on our own trip;
Else this guy a liar call:
So, good night, unto you all.
Give me your hands, if we be friends,
And we can scrap all this reality television crap and get excited for college Nationals.

Go Burnie and Ashley, screw everyone else. #Krodie4Evah

Daniel: I know this wasn’t the last episode of the season, but since it’s the last episode I’ll likely watch, here are my winner and loser of the whole season. My winner for the season is Phil. I think I may have named him a winner in an episode already this season, but that just does to show how true it is. This man has a dream job. Travel the world, do basically nothing in each country except hang out with the most beautiful woman from that country, and get paid a bunch of money to do it. When I grow up, I want to be Phil Keoghan.

And the loser: friendship. In general, I am a cynic. But this show made me believe in something. That, against all odds, competitors could become friends and enjoy this Amazing Race together through camaraderie and good, old fashioned sportsmanship. But that dream was dashed today. To see our boys stabbed in the back like that is something I may never recover from. Thank goodness for Brodie and Blair, because without their surely marriage-bound relationship, I would have no hope for humanity left after this show.

Katie: For the record, I have kept watching the show, because I have few other things in my life. The show just isn’t the same without our boys, and I think everyone knows it. Spoiler: people start talking to Dana out of desperation.

1. Brodie and Kurt – Betrayed and ambushed by the collective jealousy and cowardice of their foes. Maybe I’m still a little salty about the worthless cowards that struck down our boys in their prime, but this was a miscarriage of justice. When you get eliminated because everyone else decides that you are too powerful, and can only be defeated by a well orchestrated, conniving, and underhanded group effort, it means you’ve done something right. Krodie, hold you heads high and know that the plains of Elysium await, while the treacherous mongrels that conspired against you face an eternity of damnation to pay for their sins. Et tu, Burnie? – cue The Rains of Castamere –

2. Zach and Rachel – Clearly they messed up by having Rachel do that saltwater bucket challenge thing, and they probably should have done better with the kite since they spent about 20 minutes talking about how good Zach is with “projects,” but ultimately not too bad considering earlier I predicted that Zach would end up getting fed into a woodchipper.

3. Erin and Joslyn – Honestly I pretty much forgot these nothings existed. I think they lost because of a yeti? Or something?

4. Blair and Scott – Losing because your young, spry daughter makes you do some crazy Eurasian ballet dance and then having to go back because you took the wrong bag is not great, Bob.

5. Darius and Cameron – A few prawns short of a galaxy.

6. Marty & Hagan – Hey remember these two? The crazy pageant mom and Florida daughter? Oh man, I wish they had stuck around a little longer, I feel like we could have seen some real fireworks between them and Dana. Oh well, they lost because they didn’t know car could drive on dirt, so maybe it’s for the best.

7. Brittany and Jessica – Losing because you don’t know about flags is bad. Claiming you lost because everyone ganged up on you just because they are jealous that you are a model is worse. Not figuring out a puzzle (that the flags on the map matchup to the ones on the poles) that Cole was able to crack? Shame. Shame. Shame.

On a final note, we’ve had a blast supporting #Krodie here on staff. Now that there’s concrete evidence to support our degenerate hunger for any frisbee famous people making inroads into pop culture television, we welcome your tips for ultimate showing up in the mainstream. And by tips, we mean your collective prayers that Lisa Pitcaithley will be welcomed onto the cast of the next Real World.

Thanks for reading and watching along with us. ~#TeamKrodie