Top coaches from around the world led two days of the Elite Skills Clic. 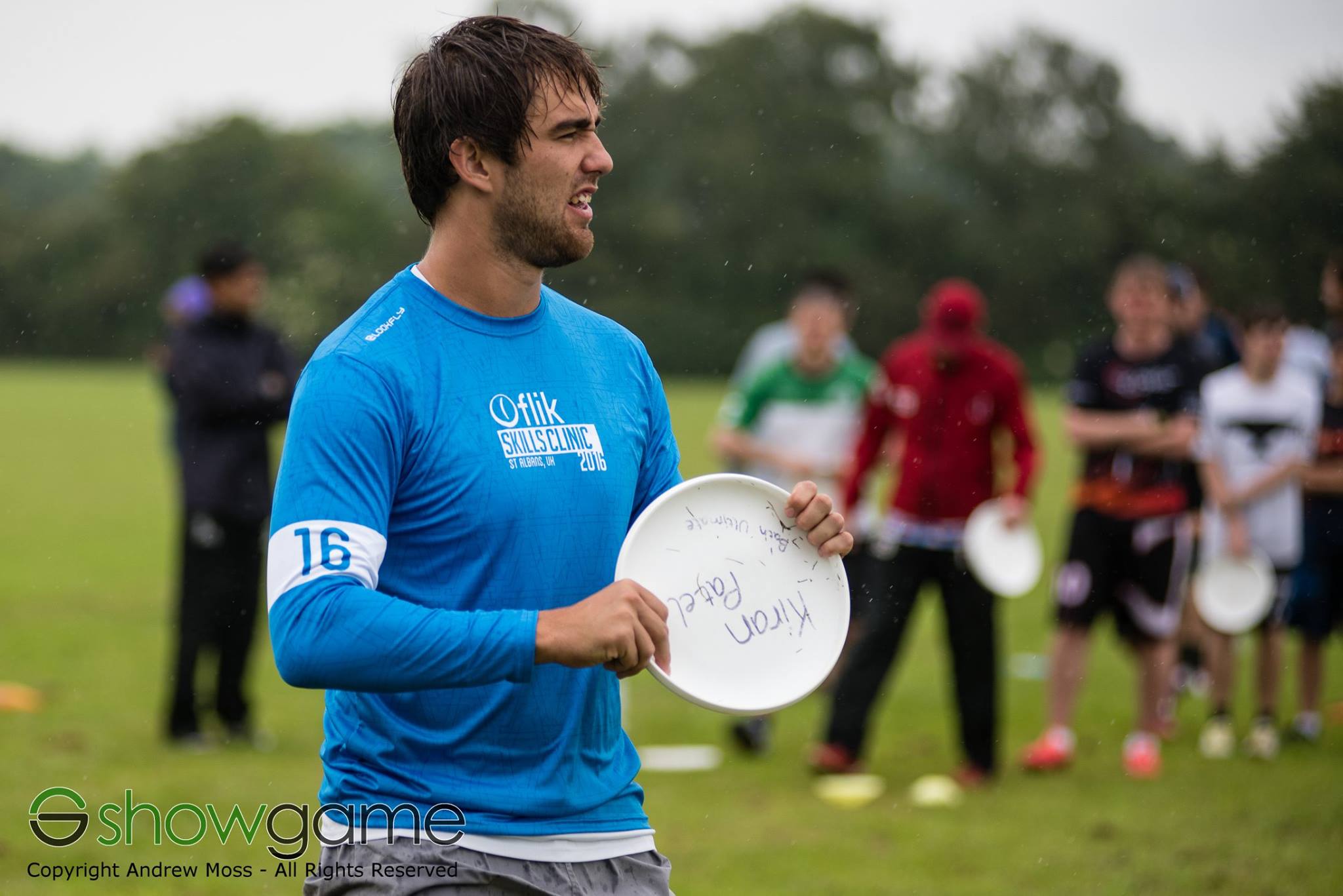 The article is sponsored by VC Ultimate. Please support the brands that make Ultiworld possible and shop at VC Ultimate!

One week before the 2016 World Ultimate & Guts Championships, Flik Ultimate gathered 12 top players and coaches in a small village north of London to put over 200+ ultimate players through a weekend of intensive training. The 2016 Elite Skills Clinic in St. Albans, England, was one of the largest advanced skills clinics in the history of ultimate.

Back in 2010, I hosted members of the 2009 USA World Games team that I’d met in Taiwan for a clinic the week prior to WUCC in Prague; we attracted 185 players for a weekend of skills training led by top players from Revolver, Fury, Riot, Sockeye, and others — a real All-American event. With the impending WUGC in London this June, many of the world’s best players would all be travelling to the UK, creating a unique opportunity to host a similar clinic with a truly international feel. Why settle for just getting the thoughts of only the top US players when we could also get coaches from Japan, Australia, Canada and more? 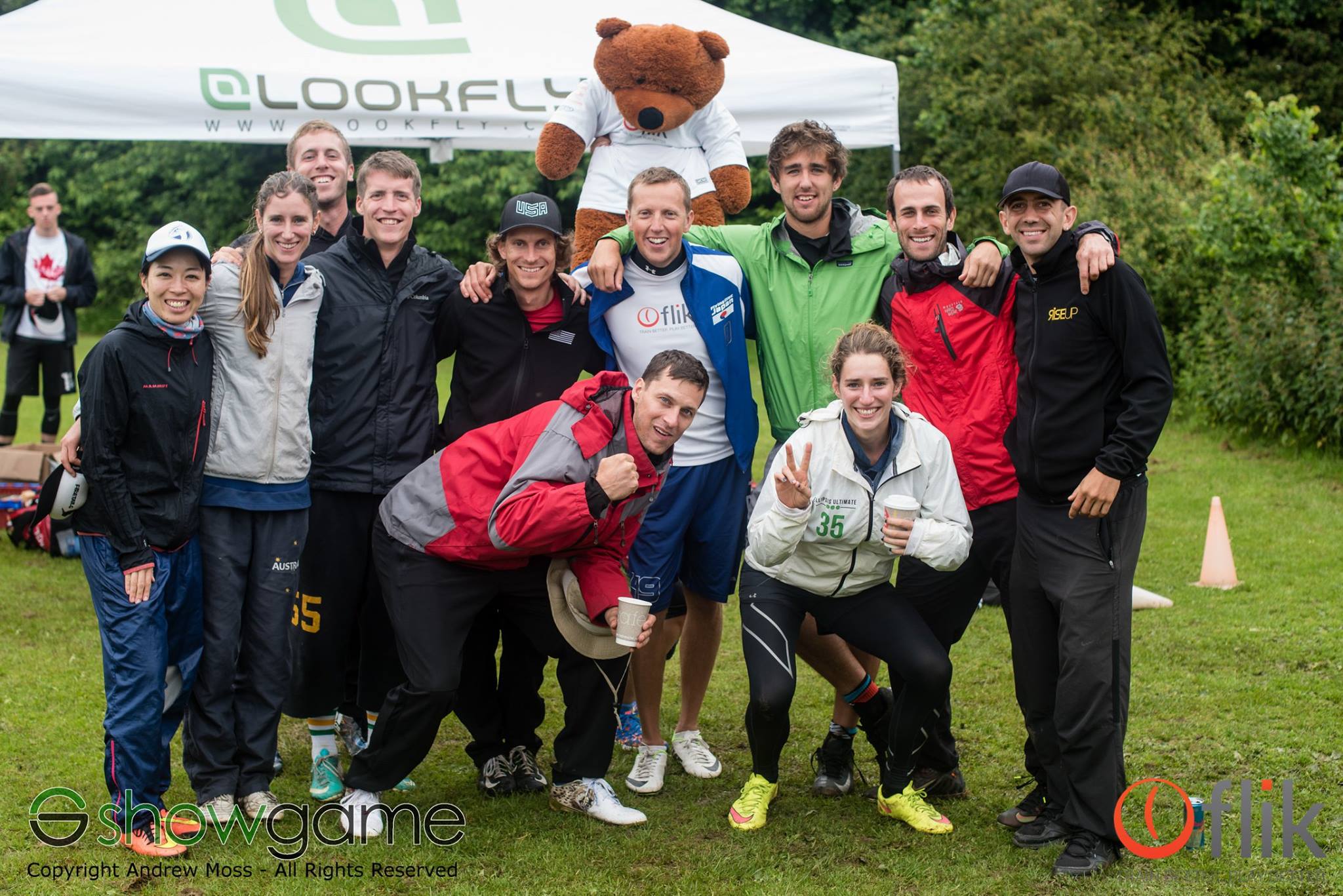 While this amazing cast of coaches was guaranteed to draw in players, on a selfish level, I was really excited about getting to work alongside such incredible players and keen to see what I could learn. Needless to say, there was plenty of talk between us about coaching theory during any game in play — at least when we weren’t goofing around.

The theme of the weekend was variety, so even each warm-up was different. The entire group was warmed up by Goose on Saturday morning, two huge lines of 100 people facing each other, with coaches repeating the instructions down the middle. After lunch, Moe led a Japanese style warm-up, complete with synchronized clapping and Japanese instructions; the crowd lapped it up. Sunday morning’s warm-up was led by John who put us through a Barramundis routine with the biggest warm-up circle ever seen (and finished off with a huge group hug), while Jimmy took charge after lunch. 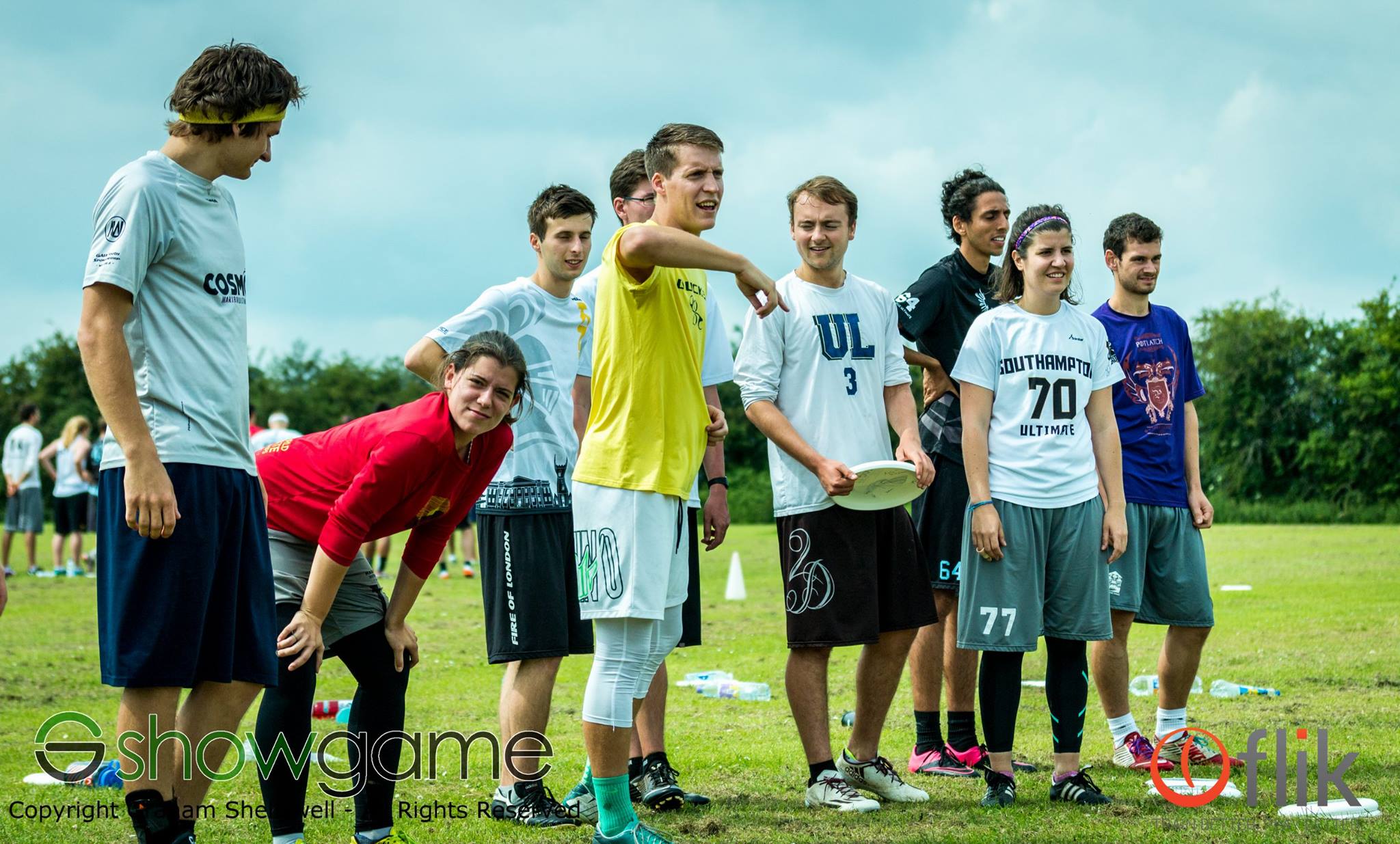 On Saturday, the participants were divided into manageable groups, with each coach working with groups of around 20. The theme of the day was individual skills: people learned Canadian-style downfield defense from Alex, dump sets from Dylan, and how to time cuts from Cat. Participants rotated to the next coach every 30 minutes, and some minor themes emerged; Jimmy & Brett were meant to share a field on one side of a hedge but Brett snuck onto the main field, so Jimmy felt lonely and started to creep back towards everyone else. Meanwhile, Dylan just couldn’t get the timing right and was often caught out by the hooter (“Aw come on! Really?” at the five-minute warning, forcing him to rush the end of his session… I think he just enjoys talking), and Brett was just too kind to stop answering questions and tell his group to move on.

Lunchtime came quickly. A long queue of people making sandwiches and joining the competition to win the 4ft teddy bear formed. The sun was shining and everyone was having a great time. 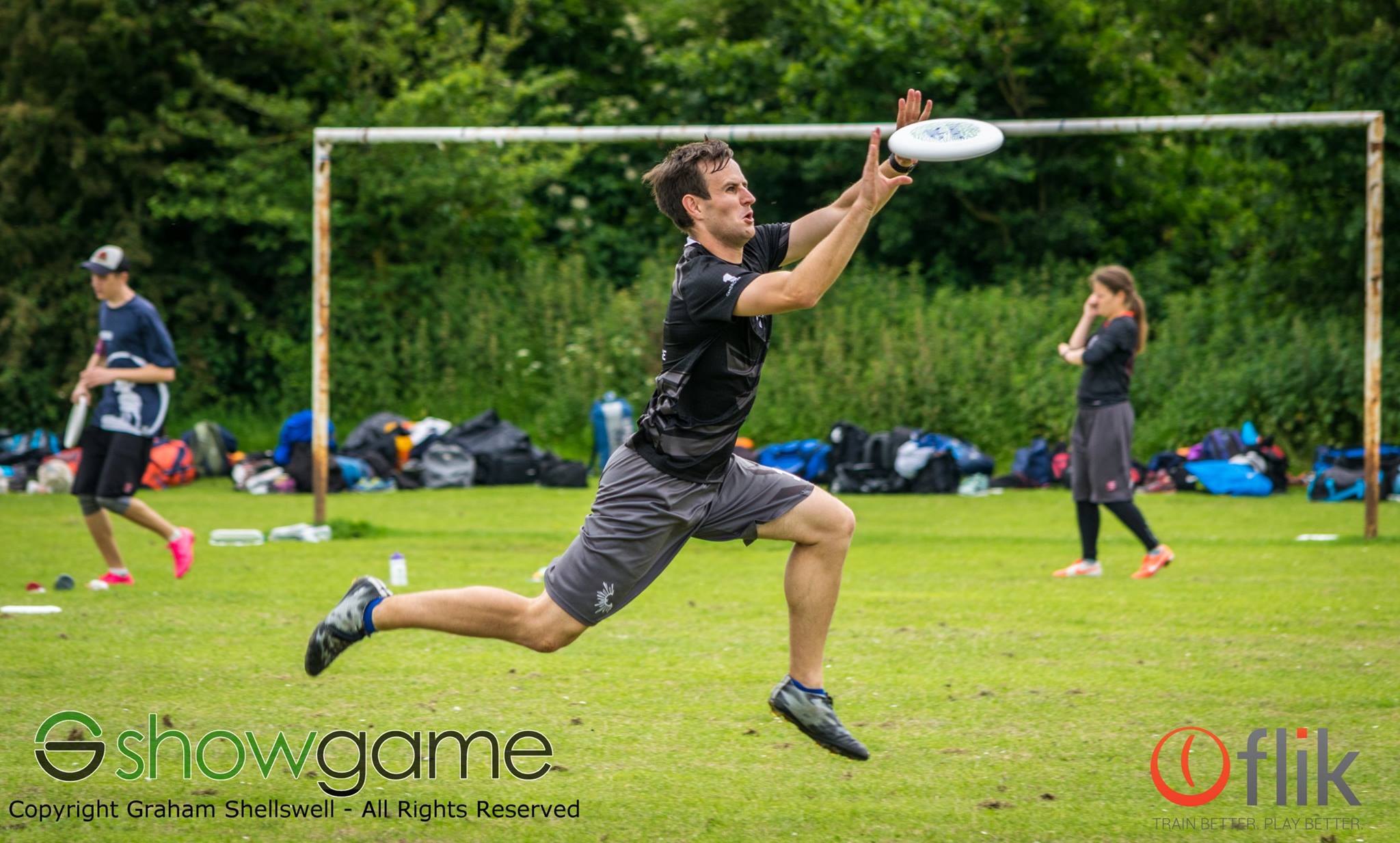 On Sunday, I wanted to do something different, as well as give our coaches a chance to work with someone new, so our coaches paired up and worked with slightly larger groups for around one hour. Beau & Mish teamed up to teach team defense, Brett & Goose taught vertical stack patterns, Jimmy & Dylan worked on cutting as a team in horizontal stack, Mario & Cat taught how to time cutter movement with handler resets, while I got to work on “Hasami,” a Japanese team defense with Moe. Hasami means “scissors” in Japanese and is a coordinated defense of systematic poaching and switching that was really, really fun to learn. Even some intense downpours couldn’t dampen the mood, and we overran by an hour as people just couldn’t get enough. Maybe next time we’ll do three days. 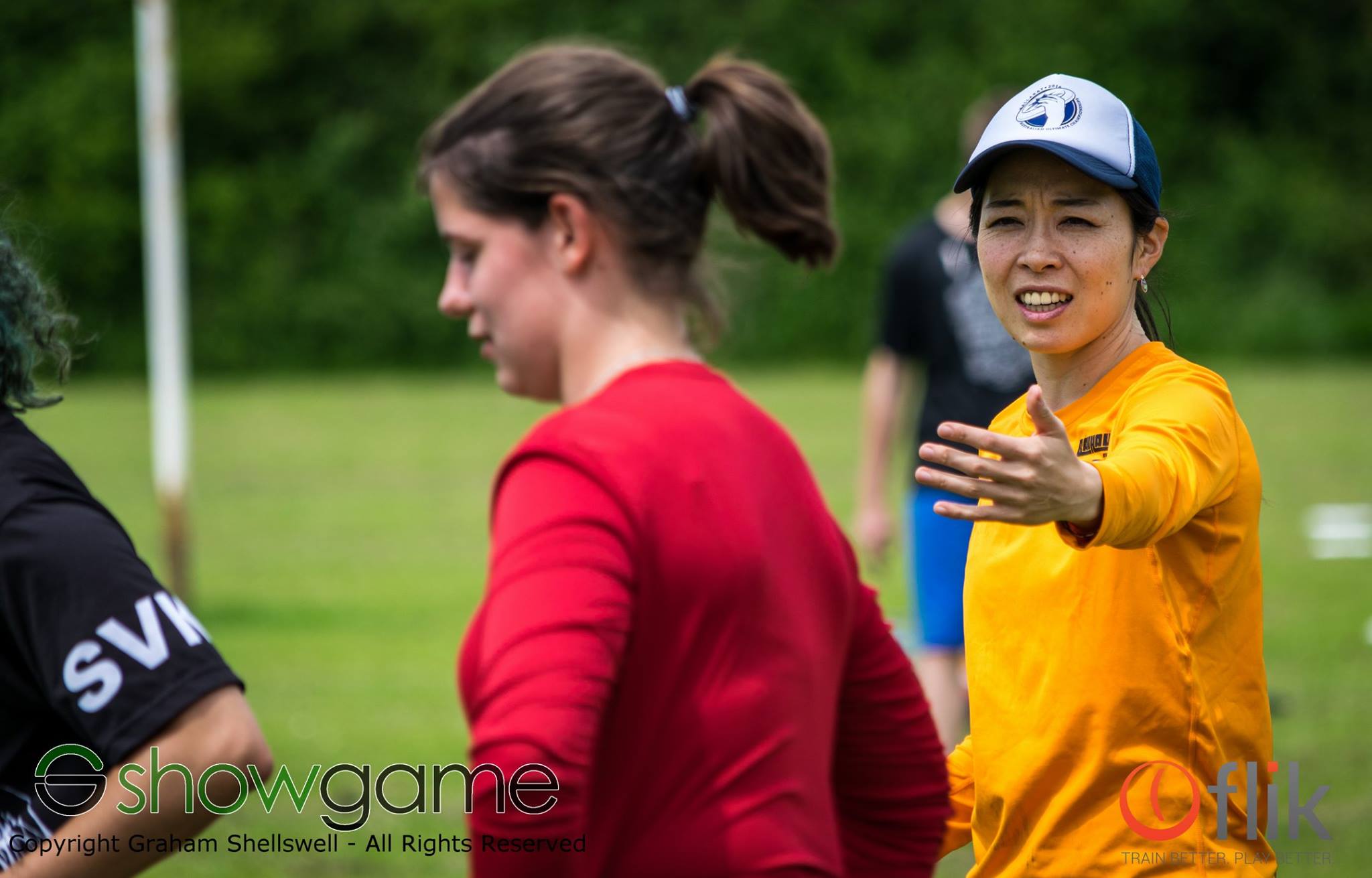 What Did Players Think?

Here’s a few quotes from people who attended the clinic last weekend:

“Possibly the best day of my life. Meeting and talking to all those people which I look up to so much was absolutely incredible.”

“Overall this event was great for reminding me and understanding about the foundations of ultimate and having the chance to meet some outstanding players worldwide who cared about making sure I understood the different types of plays and formations to develop my game further in a very friendly and unstressful environment.”

“[Brummie’s] session on defensive movement was the most physically demanding, and perhaps eye opening from the weekend. It has changed the way I train and it will change the way I play”

“It’s worth pointing out that the selected coaches were not only the most popular players in the world but also really kind and approachable people in person. No sign of arrogance or being too good to coach a bunch of beginners.”

“Learned a huge amount, and had a humongous amount of fun. The coaches were some of the most humble and nicest people I have ever met (I don’t even think most of them realise just how much we idolise them), and were awesome teachers.”

“We’ve already used one of the drills from the weekend (Alex’s defence drill) at our university training!”

“All the coaches were down-to-earth, able to adapt to each player as well as sharing their personal top tips which were a great insight”. 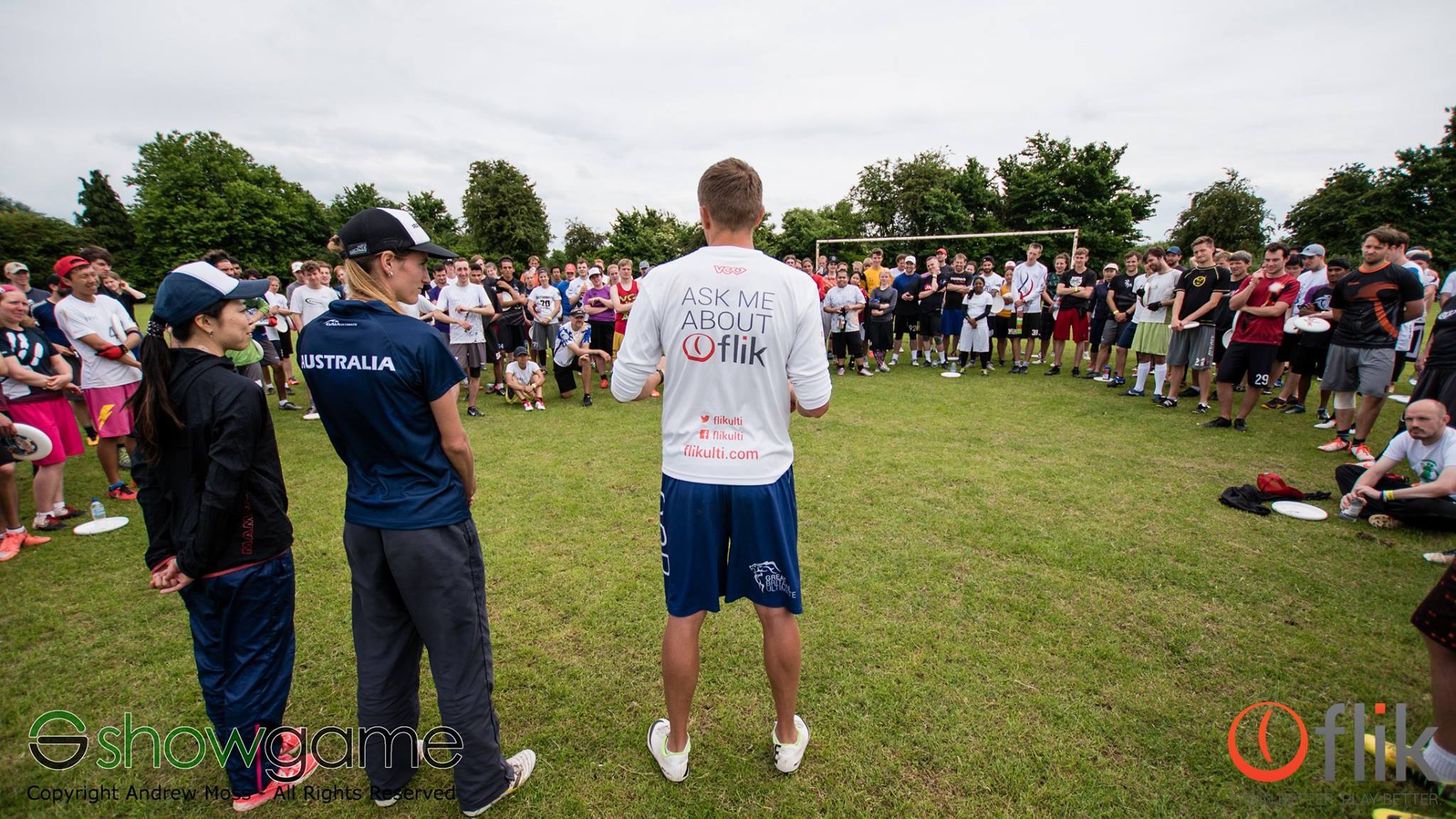 Each of the coaches has written details & diagrams of their drills, and we will be loading everything onto Flik soon after WUGC. We had videographers on site so we’ll be able to add footage of the coaches talking, and the drills in action. Follow us on Facebook and Twitter to stay informed as to when these will be available. Everyone who attended will be able to access the site for free once the content is ready; in my experience, retaining all of the information provided over the course of a weekend is very difficult so an online portal with that information will help them to remember exactly what was covered.

Photos by Andrew Moss & Graham Shellswell for The Show Game

For a chance to win a 1-year Flik subscription, a VC shirt and a giant teddy bear, see our Twitter competition. Interested in hosting a Flik clinic near you? Send us an email hello@flikulti.com.