An Observer’s View Of The Canada v. Japan Game

August 3, 2012 by Charlie Eisenhood in Interview, Other with 4 comments 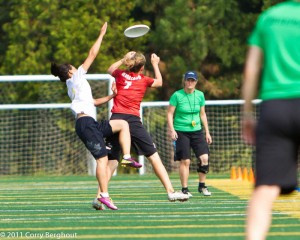 Earlier today, Ultiworld spoke with Adam Ford, a certified USA Ultimate observer since 2007 and frequent head observer at tournaments, about the Canada vs. Japan game and what he would have done if he were observing under USA Ultimate rules.

His first thoughts: almost every one of the physical plays showed in our video clip would have earned a Team Misconduct Foul (TMF). In the US, the first two TMFs are considered warnings; any subsequent ones cause a significant yardage penalty. If your team has possession and you are penalized, you must move back to the middle of your own endzone. If the other team has possession, they move up to the brick mark nearest their attacking endzone.

However, Ford said, yardage penalties don’t happen too often. He explained, “If [teams] get two TMFs in fairly quick succession in a game, generally that’s enough to calm the game down.”

He added that on the play where “the Japanese player dove into the back of the player in the endzone, and the Canadian player got up in his face” (0:25 in the video), he might have issued a Personal Misconduct Foul (PMF) to the Canadian player, “especially considering the way the game was going.” Two PMFs in one game cause an ejection for two halves of play; three during a tournament cause an ejection from the tournament. PMFs also count as TMFs.

Speaking more specifically about the role observers would have played on the game, aside from just issuing penalties, Ford said, “That game was out of hand and having observers might have kept it in hand, but it could have gotten in hand on its own. As an observer, I’ve played games where just the fact that you’re there keeps the game [together] on its own…Teams are certainly able to play with spirit; I’ve played games where the teams have never gone to the observer…If they run into each other they say, ‘Sorry, I didn’t mean it.'”

But he felt that the onus still falls on the teams to enforce sportsmanship themselves. “You would hope that the captain of the team would say, ‘Stop that, this is not cool. We have to step back. And if the other team is not playing fair, that doesn’t give us the right to play unfair,'” he said. “That’s something that should be strived for — to play fair on your own team regardless of what the other team is doing.”

But does this game show that the World Flying Disc Federation, which organizes and runs the World Championships, need observers? “I don’t think it’s a bad idea,” Ford explained. “I have seen the observer system work in the United States and Canada and it has diffused some tense situations in some hard-fought games. It’s worthwhile to have the observers there, even in games when you don’t do anything.”

He did say, however, that observers are a better solution than full AUDL-style referees. “I’m pretty much very-anti referee,” he said, explaining that it can hurt the flow of the game, using the example of two teams who are OK with small travels from each side’s handlers. Stopping play to call travels as a ref would hurt the game.

He went on to his second, and perhaps more important, point.

“In refereed sports, there are people who get away with things because the ref doesn’t see them,” Ford argued. “And the more you have the reliance on the ref to make the calls, the more you can, essentially, get away with things they don’t see. One of the beautiful things about the self-refereed game is that you can’t do that — you cannot get away with something…I think maintaining that position of power for every player on the field is crucial to the game.”

Comments on "An Observer’s View Of The Canada v. Japan Game"