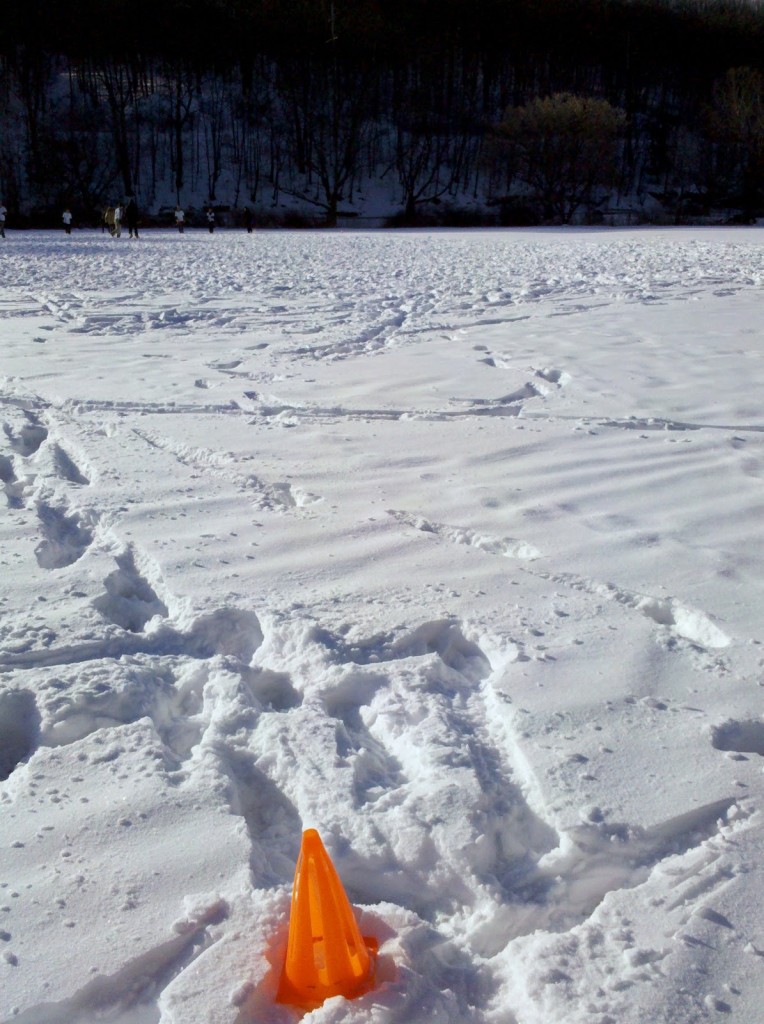 I have been defeated by the month of January. I am usually able to transcend bad weather; after all, I choose to live in New England. These last few weeks, however, have been tougher than usual. In warmer months, I take my dogs out every morning at 7:30 for an hour hike in the woods behind Hampshire College. It is an energizing way to start my day and, with an irrepressible hound mix of 1.5 years, it is crucial to get her outside if I want peace and quiet later on. But most mornings in January, the temperature at 7:30 has been below 10 degrees and sometimes below 0. It simply hurts to go outside.

I am complaining about the weather. I understand how silly that is, to complain about something you have no control over, but it still feels good to whine. So as I hold forth today on why complaining about uncontrollables is a sign of mental weakness, I admit that I am not very good at taking my own advice.

How does your team talk about ultimate when you are competing? Do they do their best to stay in the moment and only talk about the assignment in front of them? Or do they drift into the past and future, offering opinions and analysis on a multitude of topics? Here are my top 10 favorite things, in no particular order, that players waste an immense amount of time talking about.

In the days leading up to a tournament, your coach or captain may be asked for input about seeding, but it should rarely be the topic of a team discussion. Your team should NEVER carry frustration about seeding or format into an actual tournament, as it will become an excuse for poor performance, as in, “We lost but we never should have had to play that team anyway,“ or, “We could be in the semis if we had been in the easy pool.“

The worst fields I ever played on was some place in upstate New York in the early 80’s. When we lined up, the field was so hilly that we could only see the other team from the knees up. I understand the frustration of poor fields or dangerous fields. But you must take care of that before the game has started. DO NOT PLAY if you think that someone will get hurt. If you do decide to play on a crummy field, then you have decided to play on a crummy field. End of story.

The weather in New England is not necessarily much better in early spring. Cold rain, wind and muddy fields are the norm. But the more you surrender to complaining about the weather, the worse it actually feels. Knowing that everyone on your team is miserable gives you license to feel that way too. Knowing that everyone on your team is still working hard in spite of the weather is motivating. Misery or Motivation? Easy choice.

This is a tricky one. There is a difference between preparing to play a certain team and having an emotional reaction to that team. You need information on how to strategize, who should mark whom, what your overall game plan will be. You do not need to discuss who won the last game, which players were jerks, or how this team will be easy/difficult to beat. None of that matters. The more you can neutralize the power of an opponent, the more you can focus on helping your teammates execute your plan.

Some teams are known for not knowing the rules, bending the rules, or abusing the rules. You most likely will play against those teams or on those teams at some point in your ultimate life. You may also play in games that are officiated by observers or refs. Some will be good and some will be awful. I do not believe that one way of officiating is preferable, but I do know that the mentally strong team will accept either method and not get sidetracked by bad calls, no matter who makes them.

Almost every team I know has had, at some point, a Toxic Teammate, someone who will not buy in to the team concept and consistently sets him/her self apart from everyone else.

These folks are particularly dangerous during games, as the added pressure makes them focus even more on themselves. Avoid them like the plague, particularly if they yell at you, sigh loudly or roll their eyes, when you make a mistake. Teammates are there to support you at all times. Petty tyrannies have no place on a team.

Your relationship with your coach/captain may be complicated and so is the issue of playing time. The best advice I can give about PT is that everyone must know how subbing is going to run before you drive into the tournament parking lot. Thrash it out in a team meeting.

If you play on a team with peer coaches (an almost impossible situation, I think) do not expect your off-field friendship to influence how much you play on the field. If there are actual problems during a game, wait until well after the game has ended to talk.

I was lucky to coach Ironside’s Russell Wallack at ARHS and when he was a captain, I recall a discussion we had about the injuries we had on the team. We couldn’t tell if they were real or not. Were they injuries or complaints? Was there a real danger of further injury or were they uncomfortable experiencing discomfort? Shortly after, he said to the team, “Listen. If you are going to be an ultimate player, you are NEVER going to be at 100% during the season. Something will always hurt. That’s just how it is.”

Nothing really changed with this team, but I always repeat this to new teams. I am NOT advocating playing through an injury. Only you (and your doctor) know what you should and should not do. But I have seen many players get comfortable on the sidelines, not playing for months at a time. And, at that point, I think the problem may be more mental than physical.

In addition, if you have an injury that occurs during a game, make sure you have established a protocol for just these moments. Designate who goes to the player, who runs to the trainer, who makes the phone calls. Having a protocol in place does not minimize the severity of what happened; it makes for a more efficient use of time.

They will be on the sidelines. They will taunt you. They will cheer when you fail. That is their job. The best option is to completely shut them out and competitors who are mentally tough will be able to do this. You can also do different exercises to improve this mental skill. And, of course, if your team is really loud all the time, not just when good things happen, you can drown out the other team and their fans.

This may deserve its own column, but focusing on the score is the most futile exercise of all. You cannot control the score. You cannot control whether you win or lose. All you can control is how well you play and how much you contribute to your team. The more you focus on the score, or the number of breaks, or what a win or loss will mean for the future, the more you are wasting precious mental energy. Bring yourself back to the moment and see what needs to be done. I guarantee that there are many more things that need your attention than the elusive final number at the end of the game.

The above are all competitive traps that hurt the performance of your team. You may not be convinced this is true and you may even believe that fretting about the score and talking trash about other players is a strength. But before you reject this argument outright, wait two weeks and read my next column. I will detail how to transform this waste of energy into a concrete program to help your team. These suggestions will make playing more fun, less stressful and, as a byproduct, help you win more games.

Comments on "10 Uncontrollables You Shouldn’t Spend Time Talking About: Team Management (Part One)"