September 8, 2014 by Kate Schlag in Analysis with 21 comments 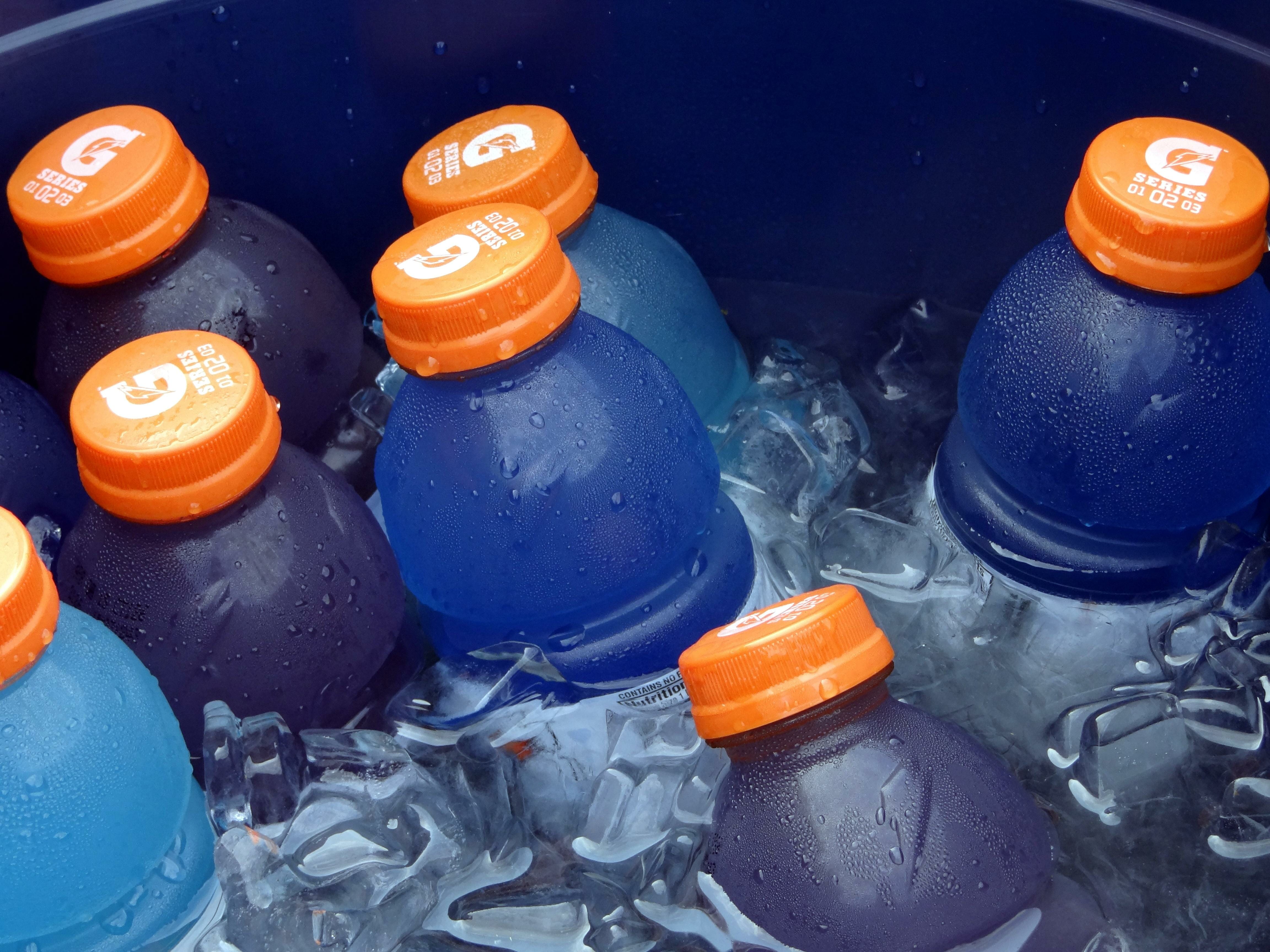 In the context of sports nutrition, hydration might be the most overlooked component of a healthy diet. Water performs myriad functions in the body:

Hydration isn’t just about water, though: electrolytes are an essential part of hydration as well. Electrolytes are minerals that form electrically charged particles, or ions, in body fluids. In the body, electrolyte concentrations form osmotic gradients1 that regulate nerve and muscle function, blood pH, and hydration. The majority of the water you drink is absorbed in the small intestine, but it’s not actively transported across the intestinal lining and into the bloodstream, like other nutrients or vitamins. Water absorption is driven by the osmotic gradients that are set in place by the concentrations of various electrolytes.

Five key electrolytes are essential for optimal function among athletes:

During exercise, fluids and electrolytes are lost through sweat; the extent to which they are lost depends on a number of factors, including air temperature, the intensity and duration of exercise, body size, gender, genetics, and fitness level. Neglecting to replace lost fluids and electrolytes during and after exercise makes performing at your optimal level and recovery near impossible.

Dehydration occurs when you lose more fluid than you take in, and normal physiological processes are disrupted. Specifically, dehydration results in a reduction of blood volume, decreased skin blood flow, decreased sweat rate and heat dissipation, and increased core temperature. These physiological shifts result in a reduced maximal cardiac output: as water from your blood is drawn away to help cool you down, your blood volume decreases and your blood’s viscosity thickens. As a result, your heart has to work harder and faster to deliver the same amount of oxygen to cells.

The severity of symptoms depends on the amount of fluid you lose, but with respect to sports performance, dehydration has been shown to adversely affect performance by increasing the perceived difficulty of exercising; reducing maximal aerobic power and endurance; and impairing reaction time, judgement, and decision making.

It’s a commonly held belief that dehydration and electrolyte loss can also lead to cramping, as an imbalance of fluids and electrolytes increases the excitability of nerves. But, as we learned in the NBA finals when Lebron James — who has as access to some of the top doctors and sports nutritionists in the country — experienced game-ending cramps, there’s still a lot we don’t know about cramping. New research2 indicates that cramping may have little or nothing to do with dehydration: when ten individuals exercised with their non-dominant limbs (cramp testing was performed on their dominant limbs to eliminate the confounder of muscle fatigue and damage) for four hours in hot conditions, reaching an average dehydration of 4.7%, there was no difference in cramp susceptibility or intensity. According to the researchers, cramping is tied to “altered neuromuscular function,” which includes muscle fatigue, not tapering enough, and a genetic predisposition. But because cramping is linked to muscle fatigue, and dehydration also plays a role in muscle fatigue, dehydration may play an indirect role in cramping.

As with other components of sports nutrition, there are no one-size-fits-all guidelines for staying hydrated. Staying hydrated or rehydrating involves simply replacing the water and electrolytes lost during exercise for an individual person, but these are very difficult to measure in a sports setting; in addition, these factors vary even within individuals depending on the environment, acclimatization state, duration and intensity of exercise, and amount of rest.

With respect to hydration and sports performance, there are three main goals to keep in mind:

Should I take salt tablets? Or drink pickle juice?

Many salt tablets contain only sodium and chloride. Because dehydration is affected by a number of other electrolytes, including potassium, calcium, and magnesium, supplementation with salt-only salt tablets is often insufficient: a study3 of IronMan triathletes found that ingestion of sodium did not have any significant effects on sodium concentration or plasma volume. Salt tablets that contain other electrolytes may be helpful, but they can have negative side effects in some, including bloating and high blood pressure, so be sure to try them out in practice.

Per three ounces (6 tablespoons), pickle juice contains 654 mg sodium, 124.2 mg potassium, 44.4 mg calcium, and 8.9 mg magnesium (although these numbers vary according to brand or recipe). Like salt tablets, pickle juice heavily favors sodium and doesn’t offer very much potassium, calcium, and magnesium, so it may not have any effect on cramping (especially if cramping is, as theorized by some, not connected to dehydration). Still, some studies indicate that some component in pickle juice can relieve cramps: in one study, subjects who drank pickle juice were relieved of their electrically induced cramp in 85 seconds, as compared to 134 seconds in water-drinkers and 153 seconds in subjects who drank nothing. However, blood tests showed no distinctive changes in electrolyte concentrations, indicating that the pickle juice hadn’t been absorbed fast enough to relieve cramping. According to lead researcher Kevin Miller, there may be a component in pickle juice that causes a neurological response, deactivating the cramp.4

What about coconut water?

Coconut water is a natural source of electrolytes: one cup provides 45-160 mg sodium, 118 mg chloride, 600 mg potassium, 57.6 mg calcium, and 60 mg magnesium (as a comparison, Gatorade offers 110 mg sodium, 90 mg chloride, 90 mg potassium, and no calcium or magnesium). Some studies have shown that coconut water is just as effective as a carbohydrate-based electrolyte drink at rehydrating athletes. However, many sports nutritionists agree that coconut water doesn’t contain enough sodium for proper rehydration and recovery–and, according to a report by Consumer Labs, many coconut water beverages don’t even contain as much sodium as advertised. Coconut water may be appropriate in shorter and less intense bouts of exercise, but for ultimate, electrolyte-based drinks or tablets, like Nuun, are probably better.

How does drinking coffee affect hydration?

Will your pre-tournament cup (or two) of coffee negate the benefits of all the hydrating you did the night before? No, according to researchers: while it’s a commonly held belief that caffeine acts as a diuretic, research shows that caffeinated beverages and water exert similar effects on body water balance and electrolyte concentrations during exercise. In addition, there is no evidence that supports the theory that chronic dehydration results from caffeine intake. In fact, coffee may improve your performance: caffeine has been shown to increase alertness and mod and decrease the perception of pain and fatigue; it also improves endurance, power, and speed and boosts the release of endorphins, perhaps making exercise more tolerable.5

How will a beer (or more than a few) affect my hydration?

In 2007, Spanish researchers reported a study that found that beer was a better than water at rehydrating students who had just exercised at high temperatures. However, the results were never published in a peer-reviewed journal, and experts went to work questioning those conclusions. We know that alcohol is dehydrating: when you drink alcohol–whether it’s beer, wine, or liquor–the secretion of a hormone called anti-diuretic hormone (ADH) is inhibited, stimulating the kidneys to eliminate more water from your system. Further research found that beverages with a low alcohol concentration–below 2%–have a negligible diuretic effect, making them just as effective as water at rehydrating–but beverages with a higher alcohol content were found to delay recovery and rehydration. The takeaway message? If you’re not dehydrated already, moderate beer consumption — that’s one beer! — won’t impede recovery following a day of ultimate.

Comments on "Hydration Tips And Information Athletes Need To Know"