This Mailbag with Mario O’Brien series is brought to you by Rise Up Ultimate.

Thank you so much for your questions! I’ll also be answering some quick hitters in the comments, so stay tuned and leave your questions there as well. Also, here’s a link to the Mailbag with Mario introduction.

My question is about handler defense. I want to get better at stopping the give-and-go. I am 6’4 and I think I use my size pretty well. I have a hard time understanding where I should be positioned after a throw goes off to stop the handler I’m guarding from immediately cutting upline and getting into a dangerous power position. If you shade over to much to stop that throw, you give up an easy break side throw. And maybe this is just me needing to improve at my footwork, and if so I hope you have some drills that could help 🙂

So, first of all you must acknowledge one of the inherent momentary disadvantages of defensive positioning when covering throwers/handlers. The throw and go is a great offensive tactic because it takes advantage of this situation. Lots of modern offenses use it, especially in vert stack. Let’s talk through the situation.

If you’re marking a thrower and doing an effective job, at the second the disc is released on a throw to the open side (either to a handler or downfield), your person currently has a direct route beating you up line or upfield on the open side. Assuming you’re both the same speed, and offense knows when this race is starting, offense has an advantage here. Your objective as a defender in this situation is to minimize the time this offensive advantage exists,  pressure the cut, and/or stop it from happening completely.

The key is in your habits as a marker. There are several key things you must do and pay attention to as a mark, but we’ll focus on how to minimize the threat in this specific situation.

Before the throw goes off

First, work on having active feet, staying on your toes, and staying balanced. These are things coaches and captains should consistently be reminding players in marking drills or focused scrimmages. It has to be a habit.  If you’re flat footed and stationary, you’re not as quick to react, and in this situation there’s milliseconds and inches between stopping the threat and getting beat. Having active feet is the easy part, as this technique is fairly commonly taught and easily adjustable and trainable in marking reps.

The next level is training yourself to get in the habit of ‘jumping the line’ every time the thrower throws straight downfield or to the open side. ‘Jump the line’ is a term I stole from my basketball days, meaning jump to the passing lane between the ball and your person after they make a pass. It’s the same idea in ultimate.

Second, you have to be looking for signs that the thrower might be looking to throw and go up-line, and accordingly make critical minor adjustments in your positioning. This skill is extremely nuanced, and takes tons of practice against a variety of throwers to learn common thrower patterns and habits.

The biggest indicator can be found in the thrower’s eyes. The eyes almost always tell where they’re going to throw. In our sport, at all levels, people rarely do no-look passes in situations where they’re truly serious about winning, so don’t be too worried about the no-look pass. Very few throwers use their eyes to deceive you, most use their body (i.e. fakes, pivots, shimmies).

If you watch a thrower’s eyes, you can tell the moment when they’re no longer looking to throw downfield. Specifically, as you see the thrower look to their open side reset, they’re no longer looking to throw where you’re positioned (to take away the break side), so you can cheat a half-step to the open side, putting you in a more straight up mark position. Now you’re a half step less behind if they throw to the open side, which can be the difference between beat and not beat. Even before they’ve thrown the disc, you should be thinking to yourself ‘ready to jump the line’.

If you go too far before they throw, great throwers will feel you in their periphery and pivot quickly to the break side and seal you out for a quick break. This means what you’re doing is a risk. But then again, all defensive positioning is moment to moment risk analysis and hedge betting in order to create more favorable situations and pressure. Maybe this risk is worth not getting routinely beat by the throw and go. This is the nuanced tricky part you’re working to figure out over time.

After the throw goes off

If you didn’t do the work before this point and they go up-line, you’re likely beat. Assuming you did everything right so far, as soon as you see that throw go off you immediately must jump the line, meaning react with a quick burst step or two towards the up line space. If they don’t throw and go, GREAT! Now you’re in a position to take away the up-line handler reset cut. If they do throw and go, it’s a foot race to the spot, but hopefully the window is tighter and they don’t get thrown to. Remember having your person get looked off on a cut is often just as valuable as getting a block.

If you don’t jump the line right away and wait for the thrower to start going, it’s too late. You have to train yourself to jump the line every time, not just when you think they’re going to throw and go. Make it habit.

Invent a drill where all you’re doing is reading a thrower’s eyes and body and you practice adjusting your mark positioning and footwork accordingly. Doing break-mark drill won’t help, because you know they’re only focused on breaking the mark. Get in pairs and take turns marking each other. Talk about real throwing progressions as a thrower, don’t just have them wildly and constantly pivot and move.

Have the thrower pretend to make a throw to the open side and practice jumping the line. Experiment how much you can cheat over when they look to their reset. By having players work in pair or smaller groups, players can get tons of reps in a short amount of time. Just because it’s a ‘drill’ doesn’t mean there has to be people standing around waiting in lines;). 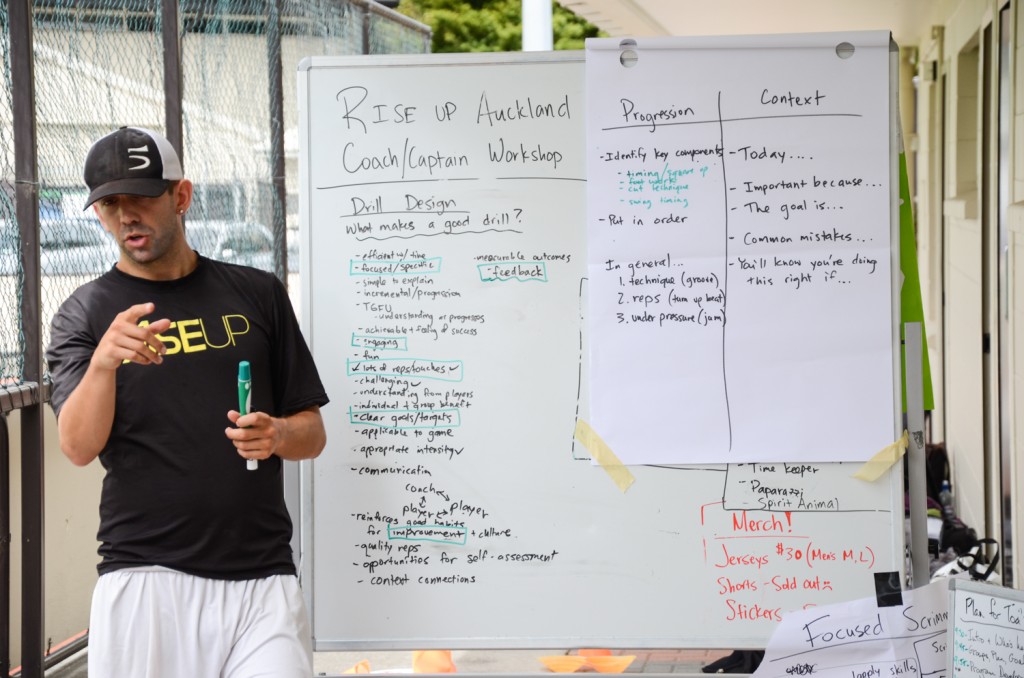 I am a high school player. I’ve noticed that handlers at the high school level (at least in MA) predominantly stick to forehands and backhands. Players throw the occasional hammer, but this is much less often. I’ve only seen a handful of players who have scoobers, off-handed backhands, and no-pivot backhands (to break the mark) in their skill set. I’ve been watching a lot of club video lately and these throws are much more common. I want to improve my handling game and I feel confident with my forehand and backhand at different release points, so I am wondering if you think it is a good idea to practice these above mentioned throws. Are they just a superfluous part of the game that gets thrown in at high levels, or are they really useful and worth practicing? Thanks.

Response from Mike Lommler via Disqus, which I agree with:

If it gets thrown at the elite level, it’s (usually) not superfluous. That player has tinkered with that throw and found a scenario where it is more practical than the usual suspects. I practiced lefty backhands for at least a couple years before I first used one in a game that mattered, and once I found a use I kept on using them because, in that moment, they were the best choice. Same thing with scoobers, same thing with forehand blades against a zone, etc. Hell, even if you never throw a hammer, scoober, or lefty in a game that matters you will definitely improve as a thrower if you practice them. You’ll understand the flight of the disc better, you and your throwing partners will get better at catching, and you’ll become a more creative offensive player.

I cannot stress enough that these throws are important to develop. Here’s a quick story from my experience and observations. I started playing about 12 years ago in Wisconsin at UW-Eau Claire and was exposed only to teams like Carleton and Wisconsin. It wasn’t until I moved to Portland and played on the west coast that I saw anyone even attempt an off handed throw, or effectively use a scoober in a high level competitive game. As I played more against teams from the bay, Seattle, and Vancouver, I realized I’d come up in a region that didn’t emphasize creative throwing at all.

This, HighSchoolPlayer, is what you might be experiencing. In fact, these throws were sometimes communicated to me as “dangerous” or “unnecessary”. As a huge generalization (which might get me in trouble, and certainly there are some exceptions), I’ve observed that west coast teams use creative throws as an accepted part of offense, whereas the east coast and midwest teams are generally more ‘disciplined’ or ‘old school’ with their throw choices and offense. Again, this is just an observation.

From a teaching and learning perspective, my opinion is that we’re limiting upper limit player potential when we don’t teach these throws, especially with young/new players. Understanding different ways to move the disc will expand your understanding of the game as a whole. Ultimate evolves differently in different parts of the world. If you want to eventually compete at an elite level, you’ve got to understand when and how these throws affect the game.

I think coaches sometimes don’t teach them for a couple reasons. One might be they don’t know how to teach people how to execute them because they’re not good at it themselves. They also might not understand the right context for when the throws are useful (i.e. hammers are best to stationary targets, are more commonly used against force forehand or zone D, should go over something but not float, and should be for throws more than 15 yards).

Coaches might be worried that players might use it at the wrong time, and this is a valid concern, so they just don’t teach it. I bank on my coaching and leadership ability to help players learn and understand their decision making and if/when they should be using hammers.

There’s also a huge misconception that these are “harder” throws. The truth is it takes just as much time to learn to effectively throw a hammer or scoober as it does a forehand. Remember how long it took you to effectively throw a forehand? Weeks, months, years… maybe thousands of throws. It’s no different for any other throw, you’ve got to put in the time So, go practice advanced throws. Keep studying film and try to undertstand the common situations where these throws happen. Look for patterns, and understand the context.

Also, have an open conversation with your coach or leadership about it. Remember, team first. Just because some guy on an ultimate blog says to throw scoobers isn’t grounds for going against a team philosophy or what your coach is trying to teach your team. 😉

Have other questions? Leave them in the comments! And don’t forget, on the RISE UP facebook page we’re always sharing tips and tricks to help you improve. LIKE us so you don’t miss out!