The major changes were outlined by WFDF:

The most significant update to the rule set is the receiving fouls change. The new version of the rule reads:

A7.2. Contact with an opponent’s arms or hands, that occurs after possession has been reasonably determined, is not sufficient grounds for a defensive or offensive receiving foul, but should be avoided (excluding contact related to rule 17.5: Strip Fouls).

A7.3. Offsetting fouls (as defined by rule 17.10) that occur after possession has been reasonably
determined must be treated as Indirect fouls.

A7.4.1. Possession is deemed to have been reasonably determined once the disc has been caught, or has been contacted in such a way that the pass will result in a turnover, regardless of any subsequent actions.

In previous editions of the rules, initiating contact directly after making a play on the disc was still considered a foul. The new rule states that if there is only contact to the arms and hands after possession has been established (i.e. a block or a catch) then this is no longer a receiving foul. Any dangerous play supersedes this addition and is still considered a foul. Rueben Berg, the WFDF Ultimate Rules Sub-Committee Chair explains this change here:

In the new rules, there is no warning on the first offside infraction, but the punishment is much less severe. If the pulling team is offside then the receiving team can decide to take the pull as it lands or take a brick. If the receiving team is offside then the disc starts where it would normally but it does so as if there was a timeout, which essentially allows the defending team to set up their defense before the first throw.

New guidelines have been put in place in the case of repeated dangerous plays or an egregious dangerous play. The guidelines state that the captains and spirit captains should meet and give examples of how to address this situation with SOTG stoppages, discussions, changing the outcome of the play, not allowing the offending player to continue playing, or to bring the Tournament Rules Group into the game to attend the remainder of the game.

The hand signals for determining the gender ratio have been changed to better align with the USAU hand signals. However, the use of these hand signals will be reduced in WFDF events as all events will be using Ratio Rule A going forward.1 Because of this change, the “stoppage” hand signal has also been changed. Here are the new hand signals: 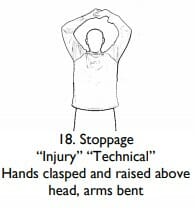 The use of technology (photos and video replays) have been allowed in WFDF events previously. However, there are new regulations on how sideline players can get involved in a discussion if they have information from a sideline camera.

B7.1.1 If team members on the sideline are providing advice based on photographic or video footage, they must only provide advice if asked (unless A11.1 applies), and only if the outcome will be to the detriment of their own team.

There are other minor changes to the rules appendix as well. A version with tracked changes from the last appendix update can be found here.