USAU's Girls' Ultimate Movement (GUM) is busy hosting clinics, recruiting volunteer coordinators, and planning a new womens ultimate website. I was able to catch-up with a group of female players this past weekend, attend a clinic, and interview two organizers.

November 18, 2014 by Sean Childers in News, Profile with 6 comments

Less than a year old, the Girls’ Ultimate Movement (GUM) is a USA Ultimate-backed initiative addressing the gender inequality in youth play, which is Ultimate’s fastest growing membership division. A vocal roll-out in the early summer included a presentation at the US Open and development of five priority action items. Post-club season, it is now seeing on-ground implementation.

A couple of these priority items (check out Ultiworld’s interview with Zara Cardoux, below, to hear details about all of GUM’s works) have visible endeavors going on in our communities right now. That includes a USAU project to staff volunteer Girls State Youth Coordinators in 27 states, a push to develop media resources for girls and women’s ultimate, and a GUM challenge to college and club teams to host Learn to Play clinics for girls in their communities.

GUM Working Group chair Zara Cadoux said that the media and communications working group, headed by Seattle Riot’s Alyssa Weatherford, would likely soon announce a new website, a girls-oriented space to post pictures, videos, and communicate about Ultimate. The website is still in the planning stages — Cadoux told us that there are many things the group wants to be able to cover — but they will ultimately pick a few content areas that the group can do focus on and do well.

USA Ultimate spokesperson Andy Lee told Ultiworld in an email that researching and creating a web presence is “an enormous and long-term strategic goal of the program” and that preliminary discussions are being had with Weatherford and the GUM Working Group.  “[B]ut it’s a little premature to comment on any specific plans or timelines related to that project just yet. It’s accurate to say it’s in the early planning stages, but there is no official announcement on the immediate horizon.”

Progress on the Girls State Youth Coordinators is even more immediate, with applications being accepted by USAU on an ongoing basis and GUM looking to scale-up. In part, that includes moving beyond general youth coordinators and youth outreach and focusing on a female-specific network. “We are looking to have more outreach, on the ground, all-around the country,” Cadoux said. “We’ve been doing a great job doing general outreach and we’ve gotten a lot of boys; the number of youth boys has skyrocketed, and that’s fantastic for youth ultimate. But we’re not seeing that same growth on the girl’s side.”

Cadoux went on to emphasize that falling behind in youth recruitment affects the community later on and at all levels, and should be looked at by everyone. “We all have a stake in this. If you’ve ever played in a recreational league that didn’t have enough women, or the gender ratio wasn’t that great, then you have a stake in this.”

Learn to Play Clinics: Some Thoughts 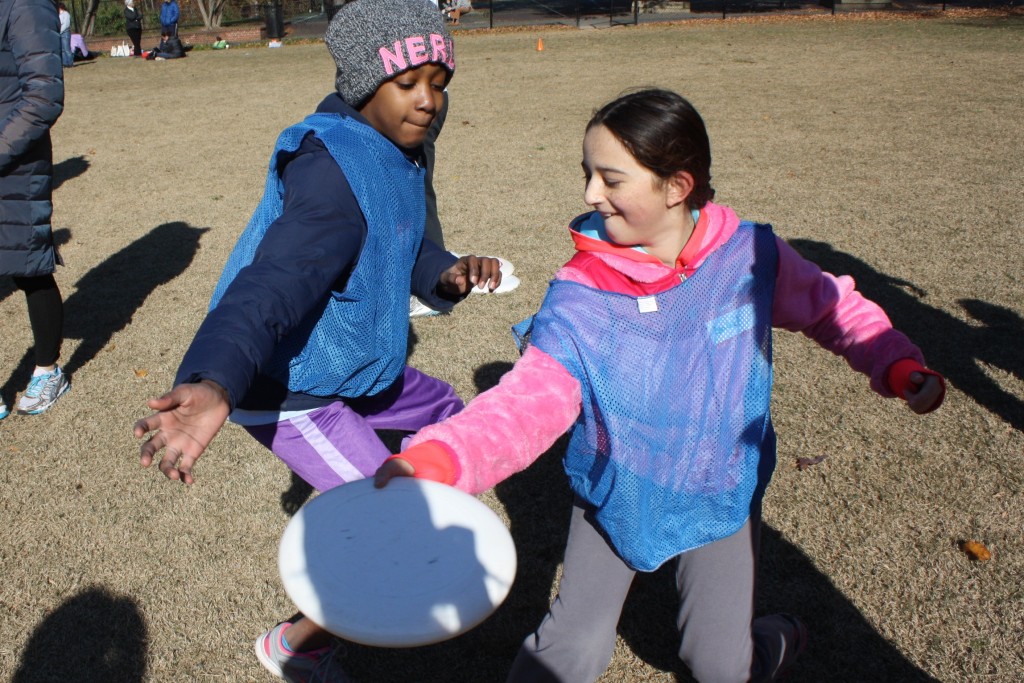 I had the chance to attend an early GUM clinic when, this past Saturday, the two top Washington D.C.-area womens teams (champions Scandal and regional contenders Backhanded) came together to host a “Learn to Play” GUM clinic in Northwest D.C. About 30 youth girls players attended the event, which is one of seven scheduled GUM clinics according to GUM’s facebook page (Lee told Ultiworld it is hard to know an exact number until groups, like the D.C. one, go through the official USAU clinic registration channels).

“Teams across the country have come together to run clinics” Zadoux said. “So many people have contacted us and asked how to get involved, [we’re hearing] ‘this went really well, we got great feedback, we want to do this again’ . . . potentially, that clinic could morph into a league.”

It was immediately clear that many of the girls were getting their first exposure to recreational Ultimate — any maybe even their first touch with a disc (or at least with an Ultrastar). As players trickled in, the clinic began with relatively relaxed throwing between experienced club players and pairs of girls (there was almost a one-to-one coach to player ratio) before continuing on to a traditional warmup, drill circuit, and scrimmage portion. In general, there were two or three circuits and groups going on at once, which seemed to be separated into one experienced group and two newer pods.

As someone who spends most of his time playing and watching competitive ultimate, it was fascinating to watch people being introduced to the sport for the first time — and we really are in a special sport, at a special time, such that the introduction is occurring with some recently crowned national champions.

I was also eager to hear from parents who stuck around and learned that a lot of the big draws for both kids and parents is far removed from anything Ultiworld does. To them, Ultimate and the coaches that bring the sport to the middle schools offer incredibly welcoming and accepting environments, a bit unlike the other mainstream youth sports. If your daughter isn’t the perfect size, without any physical awkwardness, and hasn’t been playing on a travel club since age 7, then soccer’s not an option. But the ultimate team will be excited to have you around. Maybe it should be unsurprising, but the social and personal elements of the sport were predominant in parents’ minds — far more than the competitive or athletic aspects.

Taylor and June were two middle school girls that stuck around to play, and held their own, in a post-clinic scrimmage with the Backhanded ladies. They were introduced to the sport 3 years ago by a elementary school PE teacher, and now have a middle school club team called Shockwave in Virginia. That includes weekend practices with almost 14 players. Arlington, VA (a DC-suburb) has a thriving youth scene, with about 200 youth league players, 70 middle school players, and 7 teams competing at a recent high school tournament. The commissioner of the Arlington youth league, Betsy Cody, told me that she hadn’t heard of the GUM movement before, but thought it was great that USAU was looking to get more involved with clinics.

I thought both the successes and the challenges facing the clinic were relatively predictable. The clinic was well-organized and carefully planned, with some of the little things (as always) proving the most challenging: Explaining Ultimate in four rules actually takes something like 20 minutes. If anything, the clinic had too much volunteer support — clinic coordinator Emily McAfee said she “had more people offering to help me than I could use [and] had to turn people away “ — which makes it hard to avoid what Tiina Booth accurately calls “the clump.” I thought 30 girls on an early, chilly November Saturday was a good pull, but that was the result of relentless recruitment by McAfee targeted at teammates, schools, youth organizations, and parent/neighborhood listservs; she estimated she reached at least a couple hundred people via email. I thought that might be an underestimate.

By my account, the biggest question and challenge facing the clinic approach to organizing is taking the next step and scaling up. As with all grassroots organizing, it takes more time, work, and effort than apparent to the players. I imagine that GUM will also need exceptionally good communication to transfer work by player-coaches at on-ground clinics into regular playing opportunities (which I take is the job of the state coordinators); frankly, communication between organizers and willing volunteers isn’t always a USAU strength. GUM currently thrives on an intense, almost at times insatiable energy among volunteers to address inequality issues that affect, pervade, and go far beyond ultimate. Institution building is tough work — Cadoux mentioned Riot as the prototype that has gone into schools and developed the leagues and structures to support girls, and they have a gold medal and a thriving ecosystem to show for that. I think one has to agree with Cadoux that we (all of we) will be better off if that work can be pulled off.

There was a Scandal player waiting at the road with a frisbee to direct people into the park, a table for check-in, and (despite this being D.C. instead of Brooklyn) bagels and coffee. Once girls had signed in, they got to throw with club players in a laid-back setting.

Matty Tsang smartly pointed out that, for younger groups, warming up should be as much about blowing off steam as getting your body prepared. Even after coaching YCC for two years, I’m not sure how to efficiently run a warmup for youth players. But this one, like many, erred too much on talking and regimented plyos and not enough on light playing.

The girls got to play against each other, mostly, with a few coaches watching and giving positive encouragement. I liked the balance between different skills; McAfee said she got the template from someone who had done these clinics before, which sounds smart to me.

Things like colored pennies were plentiful. The coaches split the girls up by skill level (which was a necessity with so many first timers). They tried to keep to a well-defined schedule, which I think worked except for the comment below.

My number one complaint is that the clinic could have included more playing (of any type). The longest interruption was trying to explain the rules to the girls before they started to play; explaining ultimate is something that is very easy to do and very, very difficult to do well. Backhanded seemed to get a bit tripped up when trying to explain the “contest” part of foul-contest, told the girls that you’re supposed to say “I disagree!” and everyone laughed and seemed to find the idea funny. Regardless, this is a best practice worth investing some thought into (if it hasn’t already been done).

For them this was genius; I doubt it made much of a difference to the clinic. But I heard the parents talking about how fun it was to go to the professional games; getting a flyer with ticket and website information is certainly smart.

Frisbee doesn’t require much equipment, but it does require one thing that isn’t as readily available as a basketball (or maybe even a hoop). It is so incredibly obvious once you think about it, but sending each camper away with a frisbee is huge for making it easy to just keep tossing. Signing the discs was also very cool. Someone at GUM should start a kickstarter page so all of the volunteer coaches turned away (and all of those who haven’t been to clinic) can donate to a free disc fund. McAfee told me they were able to get this set of discs donated by WAFC (Washington Area Frisbee Club) but it was the Backhanded players who paid for the fields and ancillaries (like snacks) — seems unfair given all the other work they had to do to make this clinic happen.

In the mid-level scrimmage, a girl (presumably playing for one of her first times) made an incredible attempted layout catch for a score and just barely dropped the disc — but rolled over at the perfect time to shield it and everyone on the field was unsure. Just like the (semi-)pros. All of the sideline observers (including coaches and me), knowing what had just happened, had no idea what to do. We should just give her the score because it was an incredible play, right? Who would be hurt by that? Are we even supposed to enter the role of referee? A spirited head prevailed, intervened, called it a turnover, and the game went on.

**The rest of the interview with Zara Cardoux, focusing on the role of Ultimate media and its coverage of womens ultimate, will be posted as a Deep Look podcast sometime next week.**