With U23 Worlds Just Weeks Away, A Look At Some Top Open Division Contenders 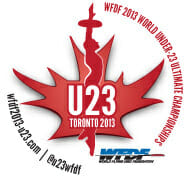 In two months, the top Under-23 ultimate players from around the world will descend on Toronto for a week of high intensity games as they seek to walk away with some golden hardware. The tournament provides a platform for the next generation of stars to showcase their skills on the international stage and to put their country on the map of top ultimate programs.

In Florence in 2010, Canada took home gold in the Open division against Japan with Germany finishing third. Can Canada take gold again this year on home turf? With the United States in the mix for the first time this year, will they finish on top? Have Colombia’s young players improved enough to compete for the gold? With 16 teams in the open division, more teams than ever before, the competition for gold is fierce; here are the teams to keep your eyes on!

Most fans expect the US to dominate the Open division. With a vast selection of talented players to choose from combined with an experienced coaching staff, expect to see them at the top. Many players on the roster have a lot of experience competing at the very highest levels of the game, both in College and Club. The US team is expected to play a fairly aggressive but spirited game when they face a weaker opponent, but they will open up their big offensive game and tough defense when they run into serious opponents. If their coaches keep them focused and grounded throughout the tournament, they have the best chance to take home the gold medal.

The most physical team of the tournament will probably be the hosting country. Canadian Club teams are famous for their aggressive game and, as a lot of players have club experience, they will bring that style of playing to the tournament. Canada should also be a good contender for the Gold Medal in Open Division. Playing at home will help and the team has worked hard leading up to the tournament. Led by experienced club players Andrew Carroll, Isaiah Masek-Kelly, and Kevin Underhill, the Canadian Open team will be a very tough out.

Another nation that many predict to be in the finals of the Open Division is Japan. They have a very unique approach to the game that a lot of teams have a hard time to crack. Coached by the veteran Buzz Bullets player Hidetoshi ‘Becchi’ Miyabe, expect to see Japan running their super-structured and organized zone defense that drives opponents nuts.

Although those three teams have a great chance to take home the gold, there are many other teams that will be exciting to watch and could end up in the big game.

The Great Britain squad is looking to steal gold after a silver medal finish in Japan last year, hoping to show that the system can represent itself at all levels. Watch out for this experienced team — well over half the roster plays for one of the two top club teams in the UK: Clapham Ultimate and Chevron Action Flash.

The German Open U23 team announced on the website of the German association that they will try to reach the finals. Although they admit it is an ambitious goal, expect them to be contenders in the semifinals. The German U17 and U20 teams, both girls and boys, have won several European championships in the recent years. Moreover, the German U23 Open team finished third in 2010 in Italy, losing to Japan only 15-17 in the semifinals.

Expect to see Switzerland play an offensive and bold game, shoot big throws and playing in a way the opponent isn’t expecting! At the Skybowl tournament in April in Switzerland, the open team won all of their games in pool play but lost in the semi-finals, finishing fourth in the tournament.

You can never count out Colombia, home of one of the world’s fastest growing Ultimate programs. Their incredible focus on developing youth players has started to churn out some of the world’s top young talent. Look no further than their performance at the World Juniors Ultimate Championships (U19) — the Open team finished 2nd behind the United States, losing by five. They will look to highlight their athleticism and speed in Toronto as well.

When you mix super talented, experienced, and athletic players together with youthful attitude and passion, the 2013 WFDF World Ultimate Championships in Toronto will be an exciting tournament to watch! Follow tournament updates on Twitter at @U23WFDF or visit the website.

Comments on "With U23 Worlds Just Weeks Away, A Look At Some Top Open Division Contenders"